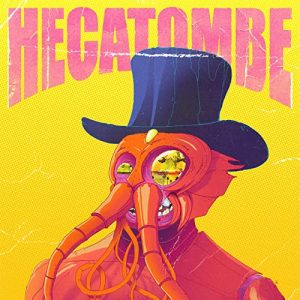 SR. LANGOSTA is an amped-up, in-your-face band founded and led by the guitarist, composer Jorge Andres Ferreras, of Puerto Rico.

The group’s approach is deeply rooted in instrumental jazz, all of the members being graduates of the jazz performance program of the Conservatory of Music of Puerto Rico, and includes heavy influences Afro-Caribbean percussion, psychedelic rock, and bomba among others.

In April 2021, inspired by political and social events on the island, including an unfortunate series of natural disasters, and the pandemic, Sr. Langosta released HETACOMBE. The album reflects uncertainty and anxiety about the future, and feeling stuck. “Hecatombe’ also explores different Caribbean rhythms such as Gagá and Bomba and fuses them with Disco, R&B rhythms, and experimental aspects,” explained guitarist, leader Jorge Andrés Ferreras. Other members of Sr. Langosta include the bass player Manuel Rodríguez, Emanuel Gambaro on keyboards and synthesizers, drummer Leonardo Osuna, and percussionists Etienne Rivera and Otoniel Nicolás.

Progressive Hard Rock rhythms dominate the tune, La Ignorancia. Also, the tunes, Mawón and La Muerte de la Oligarquía, experiment with Caribbean music, and Dominican Merengue. Pernambuco draws on the rhythms of northeast Brazil and Boom/ Clap is an R&B style song where the melody floats delicately over a beat created by a clap effect.

Hecatombe is the fourth production by Mr. Langosta. He and artists such as the drummer, Henry Cole & Villa Locura are just two of the groups that are redefining the music of Puerto Rico.

Hetacombe is available on all digital platforms including Apple Music, Spotify, Tidal, and Bandcamp. Also, the physical LP can be purchased at the Ojo de Tigre, Electroshock, and Micheo Music stores.