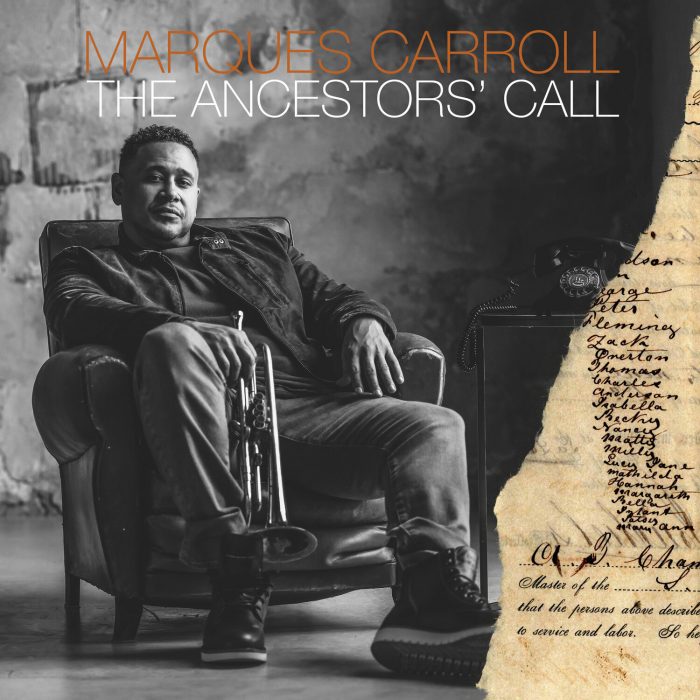 The celebrated, Chicago-based trumpeter Marques Carroll, perhaps best known to audiences primarily as a member of the Chicago Soul Jazz Collective and for his work with the Count Basie Orchestra, comes into his own on his extraordinary introductory release, The Ancestors’ Call, while paying homage to his ancestors and heritage. Joining Carroll is his tight-knit quintet featuring alto saxophonist Brent Griffin, pianist Amr Fahmy, bassist Christian Dillingham, and drummer Greg Art as well as special guests Victor Garcia on congas, trombonist Alex Wassily, and vocalist Sharon Irving.

On The Ancestors’ Call, Carroll weaves poignant stories of strength and resilience, integrity and pride, and spirituality and culture over the course of eight original compositions. The result is a rich sonic masterwork that presents listeners with a deeply spiritual exploration of the African diaspora, told from his own unique perspective and informed by the experiences of his elders. “I have been a firm believer throughout my life that our elders and ancestors are the foundation to our beginning. I have been fortunate to have had so many of these great spirits in my life show and lead the way for me in my darkest hours and in my brightest moments.” The wisdom passed on to Carroll, and the responsibility he feels to carry on in their footsteps is the central theme of this affecting work.

Arranged in eight sections, narratively ordered, the guiding voice of The Ancestors’ Call is an unnamed elderly man who symbolizes the voice and call of Carroll’s African-American ancestors. He shares his story of the beginning with “The Ancestors Call Upon Us”, the driving album opener. “His voice is rooted in the sound of the drums and yet the other ancestors speak in melody with him, calling us to listen and to learn from the collective,” Carroll remarks. With fervent musical refrains, Carroll’s horn soars over the rhythm section, demonstrating the bandleader’s immense improvisational acuity. Carroll’s stellar horn arrangements and the rhythm section’s tight pocket are on full display during “Generational Response”, which reflects on just that – the response from the younger generation after digesting the lessons that the ancestors have bestowed.

“Assemble the Enlightened” is a rousing ensemble piece and fiery call to action that prominently features improvisation from Carroll as well as Brent Griffin and Amr Fahmy. “As history has shown us, we must assemble as a unit and work together to fight injustice, hate, racism, or whatever stares us in the face.” Carroll indicates. This transitions into the next track which challenges the audience to look past physical or inner battles to move forward. The impassioned “Beyond the Battle” begins with total musical entropy, and resolves to a refined groove, retaining its ardent nature by pushing steadily, building in anticipation and intensity.

“Urgency” begins with the bandleader alone and progresses towards a Latin-tinged melody, well-supported with a propulsive rhythm from Arty, Garcia, Dillingham, and Fahmy. The piece serves as a reminder to move with purpose and to be conscious of the struggles that have birthed freedom. With “Aries Goddess (For Consuela and the Fallen)” we pay tribute to a mother who is running to her son as she hears that he has just been gunned down. The bandleader notes that “this happens all too often whether it is by street violence or by the hands of those who are supposed to serve and protect. This piece is for all of our brothers and sisters who have lost their lives on this soil.” The piece, featuring vocalist Sharon Irving tells a definitive and heart-rending story of loss. “Assemble the Enlightened” is a rousing ensemble piece and fiery call to action that prominently features improvisation from Carroll as well as Brent Griffin and Amr Fahmy. “As history has shown us, we must assemble as a unit and work together to fight injustice, hate, racism, or whatever stares us in the face.” Carroll indicates. This transitions into the next track which challenges the audience to look past physical or inner battles to move forward. The impassioned “Beyond the Battle” begins with total musical entropy, and resolves to a refined groove, retaining its ardent nature by pushing steadily, building in anticipation and intensity.

“Resolution For Us” reflects on the hope for peace of mind and heart that one holds amidst tragedy. Carroll and Griffin weave soulful and passionate melodies throughout a piece that is filled with harmonic and rhythmic intrigue. “Our Ancestors Final Words” delivers us back to the energy of the opener with a renewed emotional gravity and intensity. Messages of hope and encouragement are highlighted by the transition to a deep, lively swing with stunning solos from the ensemble. The bandleader notes that the ancestors deliver a powerful story during the closer that conveys “we come from strength and determination. Let us not forget who we are.”

With the release of The Ancestors’ Call, Marques Carroll comes to the fore as a major musical force with a distinctive voice and powerful intention: to respect the tradition, preserve the culture, and push forward. He does all of that and more on this powerful new album, which will be available digitally via Bandcamp and other major retailers, and as a CD and vinyl LP.

Chicago-based trumpeter Marques Carroll is keeping the tradition of jazz alive while pushing the genre forward into exciting new territory. A bold performer and passionate educator, he is dedicated to preserving the authentic culture of jazz and spreading his holistic love of music around the world. 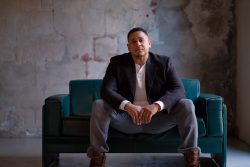 Born into a musical family in St. Louis, Marques fell in love with the trumpet when he was only 8 years old. His grandfather worked with jazz legend Clark Terry who would become a major influence on the young musician. Marques grew up absorbing the blues of Louis Armstrong and the laid-back sounds of Miles Davis, eventually going on to study jazz performance at DePaul University. He expanded his palette to include classical and hip-hop influences, making him a thoroughly modern and versatile musician.

Marques has worked and shared the stage with jazz powerhouses like Carmen Bradford, Dee Dee Bridgewater (Count Basie Band), Etienne Charles, Christian McBride, Jon Faddis, Meshell Ndegeocello, and Randy Weston (Chicago Jazz Ensemble). Marques’ compositions are soulful explorations of culture and consciousness. A storyteller at heart, he uses his horn to break down barriers between genres, writing evocative music that speaks directly to the soul. “Every instrument plays a character,” Marques says, describing his methods. “I want people to open their minds to what the story is about. Every piece I write is purposeful.”

In addition to his prolific performing career, Marques is an accomplished educator. He is the musical director for Chicago Jesuit Academy, and regularly holds clinics and master classes around the country. Marques is the leader of the Trumpet Summit and co-leader of the Chicago Soul Jazz Collective, and also a permanent sub-member of The Count Basie Orchestra.