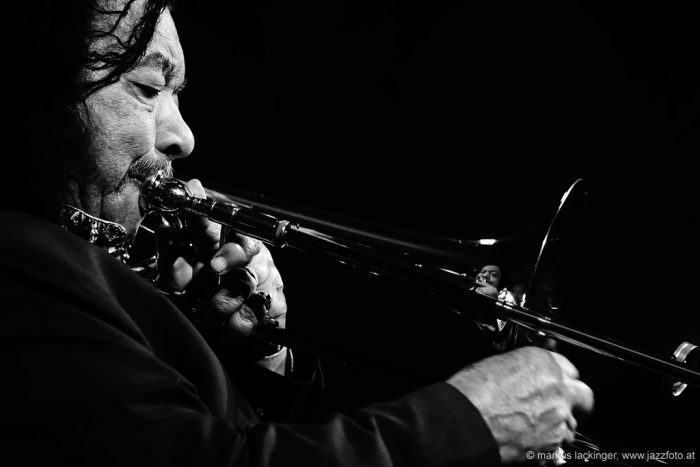 News of virtuoso, master trombonist, composer Raul de Souza’s death sent shockwaves throughout his homeland and the international music community. “With great pain, the family communicates the death of Raul de Souza tonight in France. “Guerriero,” as always, fought until the end of his forces against cancer. Our Brazilian hero left for eternity, leaving for everyone his greatest legacy, his music. We are immensely grateful for the support that all of you have always shown,” wrote de Souza’s family.

João José Pereira de Souza, aka “Raulzhino” was born in Rio de Janeiro, on August 23, 1934. He grew up in Bangu, a suburb of Rio de Janeiro. There, a trombonist in the local church band encouraged him to take up the instrument. At 16, after winning two talent shows, he adopted the nickname “Raulzhino.”

De Souza cites the jazz trombonists Frank Rosolino, J.J. Johnson, and John Coltrane as some of his primary influences.

In the early 60s, de Souza was (briefly) a member of Sérgio Mendes’ revolutionary Bossa Rio Sextet and Manfredo Fest’s (pop-oriented) Bossa Rio. In 1965, he recorded his first album as a leader titled Raulzinho, A Vontade Mesmo (At Ease) for RCA.

De Souza was part of a wave of Brazilian artists that migrated to the U.S. on the heels of Stan Getz’s Jazz Samba (1962) and Getz/Gilberto (1964). When Airto Moreira and Flora Purim moved to the U.S. in 1968, they encouraged the trombonist to be part of their band. In a past interview, de Souza said he came to the U.S. seeking “better monetary conditions” and “recognition.”

In 2017, de Souza and a group of young musicians met at a jazz festival in Hamburg, Germany, and formed the Generations Band. The group toured shortly before the pandemic and lived together for several weeks before recording Plenitude (Pao Records). The repertoire consists of contemporary arrangements that breathe new life into de Souza’s early funk successes. It also includes a rework of Chico Buarque’s Apesar De Voc and several original compositions.

The lineup includes the Swiss-born trombonist and arranger Christophe Schweizer, pianist Alex Correa, bassist Glauco Soltes, and drummer Matheus Jardim. At the time of the sessions, de Souza was 83.

Unbeknownst to the general public, de Souza is the inventor of the electric valve trombone known as the “Souzabone.” According to de Souza, he created the trombone with four valves and pedals to find the low F and C notes.

While researching de Souza, I realized there is very little information about de Souza, the man. Here’s what he had to say about his collaboration with Sonny Rollins. “It was a fantastic experience! We became friends instantly. Unfortunately, he couldn’t do the album promotion tour because I was hit by a taxi and was immobilized for three months in the hospital. Sonny visited me at the hospital. We were sad because we couldn’t continue this work together.” Also, de Souza believed the roots of samba, jazz, and funk were different languages united by their African roots.

If you’re not familiar with de Souza’s music, Plenitude is a great place to start. For a taste of de Souza as a player, composer, and arranger, check out Brazilian Samba Jazz.

In the spoken introduction to Plenitude de Souza says, “A big hug to everybody. Be happy, glad, and satisfied with the life that God gave you.”