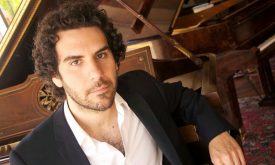 Pianist ALEX CONDE Reimagines Bud Powell Through a Flamenco Lens on DESCARGA FOR BUD. Descarga for Bud is the exhilarating new album from Spanish pianist and bandleader Alex Conde. A bold reimagining of compositions by one of jazz’s most enigmatic figures, Bud Powell, this illuminating 9-track set uses these bebop landmarks as blueprints for an exciting fusion of the Caribbean and Iberoamerican musical lore. Available everywhere on May 28, 2021, via Spanish label Sedajazz, Descarga for Bud is the second installment in Conde’s Descargas series, the first of which was his widely-acclaimed 2015 release Descarga for Monk (Zoho).

For over a decade, pianist Alex Conde has maintained a fruitful and versatile career as a bandleader and composer. His dazzling technique and unique musical presentation have brought him to some of the most prestigious stages in jazz. Revered critic Raul da Gama says “[Conde] is a pianist whose music is sustained by the fecundity of his Spanish roots. Through it all, Mr. Conde is absolutely thrilling.” On record, Conde has cemented a reputation as an accomplished performer with an astute approach to unifying Latin jazz with music traditions from his native Spain. His adventurous tribute to iconoclast Thelonious Monk, Descarga for Monk, received unanimous praise, as did his 2018 release with Ropeadope, Origins, which explored the roots of Afro-Cuban music and jazz from a flamenco perspective. With Descarga for Bud, Conde reunites with multi-Grammy nominated percussionist John Santos and acclaimed bassist Jeff Chambers and adds drummer Colin Douglas to the mix. These seasoned and versatile players beautifully adapt to Conde’s astute arrangements of Powell’s compositions.

On tracks such as “Oblivion”, “Parisian Thoroughfare” and the time-tested “Bouncing with Bud”, Conde’s arrangements revolve around traditional flamenco forms such as Bulerías or Soleá, on which he employs the talents of fellow countrymen Sergio Martínez on cajón and claps and flamenco guitarist José Luis de la Paz. Paz’s unique contributions bridge the aesthetics of both bebop and flamenco music in a particularly astounding and affecting way. The album also features Mike Olmos on trumpet who effortlessly lays bonafide bebop lines over the bulerías arrangement of “The Fruit” and the complex and brisk “Tempus Fugit”. “Hallucinations” leans toward the classic Latin jazz idiom, while the rhapsodic melody of “Wail” is played as a joyous calypso with Jeff Narell doubling the melody on the steel pan.

In his liner notes for Descarga for Bud, Grammy nominee Julio Martí declares, “[this album] is his best work to date. Alex makes the musical universe of this bebop genius his own and adds to it a rhythmical richness, that is at the same time sophisticated and very refreshing.”

Throughout this brilliant new release, Alex Conde demonstrates his incredible prowess as a pianist, taking inspired solos and skillfully supporting his bandmates. In his acknowledgment notes he dedicates this album to the fathers of jazz, the black American composers who created this music and who he has admired since an early age. Descarga for Bud is a loving tribute to one of the architects of jazz, one which explores the massive stylistic potential of Powell’s oeuvre.

Descarga for Bud is available on all digital platforms

Isadora Duncan: The Amazing Woman Behind the Song