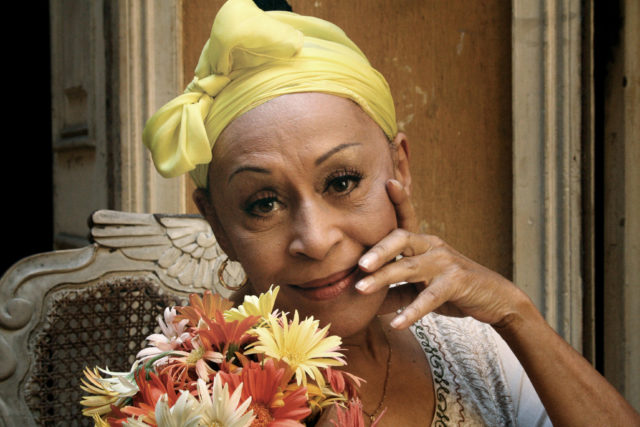 “It is the simple and profound things — life, love — that inspire me most,” she says. “Singing energizes me, and with this energy, I can introduce my culture and my roots to the world. Music is a part of nature, and a huge part of my life.” Omara Portuondo 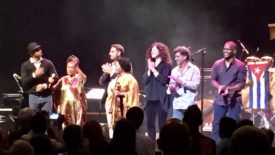 Decked out in colorful regalia, vibrant and looking younger than her 85 years, she celebrated her birthday and an illustrious career in one fell swoop.

Just in case you are wondering, Omara is a consummate show-woman, who has lost none of her sassiness or coquettishness. And, she can still belt out a romantic bolero that will bring you to tears.

The other star of the show was, pianist and musical director, Roberto Fonseca, who is described as having, “music hard-wired into every cell, pouring out his body and soul.”

Also, virtuoso violinist Regina Carter and the soulful clarinetist Anat Cohen, who accompanied Omara brilliantly and, whose solo efforts brought the audience to their feet on more than one occasion.

With respect to the manner in which the event was advertised, the mere mention of the “From the Buena Vista Social Club” raised expectations and probably filled seats but as Omara clarified in a recent interview, “Buena Vista was a complete orchestra. This is a band.”

For those who are new to Omara, her inclusion in the Buena Vista Social Club did much to enhance her international profile and possibly, extended her career (she is the only living female member) but for the diva, who began performing 70 years ago at Havana’s famed Tropicana club, the Buena Vista chapter is a high note in a career that has seen her work with stars such as Nat King Cole, Herbie Hancock, Edith Piaf and Chico Buarque.

Currently, Omara is nominated for a Latin Grammy for Canciones de Cri Cri “El Grillo Cantor,” an album of songs for children recorded on Havana’s Bis music label, which is as yet unavailable in the U.S.

As the Program Notes eloquently state, “Now, in her mid-eighties, there is a sense in which the curtains of an era are slowly, elegantly coming down. But she will forever, as the old show business adage has it, always leave them wanting more.”

Naturally, age is a factor (she will be 86 next month) but it’s not in Portuondo’s nature to go quietly. “I’m not a little girl anymore,” she said recently, “but I feel like one.” And, for all intents and purposes, she still sounds like one.

Omara Portuondo’s family history is a romantic New World saga. Her mother was born into a rich Spanish family and was expected to marry within her social caste, but instead eloped with a Cuban baseball player—a black man. Omara began her show business career as a dancer at the fabled Tropicana in Havana. With her sister Haydeé and others, she formed a female vocal quartet, Cuarteto Las D’Aida in the early 50s, a group that achieved widespread acclaim and remained together for fifteen years. Omara loved both American jazz (early in her career, she worked with Nat King Cole) and the romantic legacy of Cuban music—coming to be known as the “fianceé of feeling.”

While her sister went into exile in the U.S., Omara remained in Cuba, lending her vocal talents to numerous bands, as well as cutting several albums. Ry Cooder met her in Havana before the sessions for Buena Vista, and the following year, during the legendary sessions, Omara happened to be recording at EGREM Studios at the same time. Cooder immediately enlisted her for the project, setting up her memorable collaborations with Ibrahim Ferrer and Compay Segundo. Because of the success of the Buena Vista projects, Portuondo has had a hectic, international touring schedule, but she also continues to perform at her favorite spots in Havana. (Source: PBS).