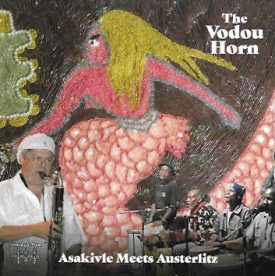 The musical trilogy titled, The Vodou Horn; Water Prayers for Bass Clarinet and Dr. Merengue are musical offerings to Marasa Twa, known in the spiritual traditions of Haiti as the magical triplets that manifest divine mysteries.

In the liner-notes for Vodou Horn, Austerlitz writes, it is his  hope the offerings, “contribute, in some small way, to propagating the transcendent vision that has long fueled the ongoing struggle for social justice from which these traditions emerged.”

Austerlitz is no stranger to Haitian soil. For over 30 years he has participated in spiritual pilgrimages, attended religious ceremonies and received traditional knowledge and guidance from his fellow musicians and the elders. Over time, he developed “A Vodou Horn sound on the electronic bass clarinet,” which figures prominently on this record.

Briefly, Austerlitz met Franck Desire, leader of the group Asakivle in 2010. The two struck up a warm friendship and worked together on and off. “I have always loved Haitian music,” says Austerlitz, “and was elated to encounter a group of drummers and singers with whom I felt such synergy! Franck told me that the symbiotic feeling was the same so we decided to make an album.”

The Vodou Horn celebrates the power of Rara (processional music of Haiti), salutes the diety Legba (the gatekeeper) and the Congo-derived tradition of Soucri through traditional Vodou songs with elements of jazz and rock. Also, it encourages work, cooperation, and the spirit of collaboration.

The sound is raw (at times, it sounds like a field recording), powerful and magnetic. On a broader scale, The Vodou Horn celebrates Haitian music and culture and Austerlitz’s musical journey.

Much like his mentor, the historian, and writer Robert Farris Thompson (aka “Master T”), who specializes in the art of Africa and the Afro-Atlantic world, Paul Austerlitz has carved out a unique place for himself in the areas of Dominican, Haitian and World Music.

For listeners who wish to go deeper, the liner notes offer translated and interpreted lyrics. According to Austerlitz, “Haitian religious songs present great wisdom; they constitute a kind of ‘Bible’ of spiritual teachings.”