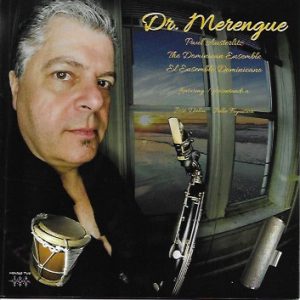 DR. MERENGUE is an aural reimagining of the book, Merengue: Dominican Music and Identity (Temple University Press, 1997). Also, it is part of a trilogy called Marasa Twa: Vodou-Jazz-Merengue. In the spiritual traditions of the Dominican Republic and Haiti, the Marasa Twa are magical triplets who manifest divine mysteries.

Through extensive interviews and written commentaries, Merengue: Dominican Music and Identity examines the historical and contemporary contexts in which merengue is performed and danced. Also, Austerlitz tells the story of merengue’s political functions, class and racial significance, including how some Dominicans continue to deny its African roots.

Briefly, each piece (track) is dedicated to a great figure in the history of merengue, such as Nico Lora, a singer, accordionist, and innovator from the Cibao region of the country, whose music and lyrics provided social commentary. Legend has it that Lora could instantaneously improvise merengues on any topic. “People would give him tips and say, improvise a merengue about a girl. I’m trying to date her and I want her to like me, and he would do that, and she’d be impressed.”

Other tracks include Los Saxofones (The Saxophones), based on accordionist Francisco Ulloa’s and saxophonist Oscar Pena’s interpretation of the tune.

Santiago was originally composed for solo piano and meant for listening. Austerlitz uses multiple instruments and adds a jazz tinge.

La empaliza is based on the jazz-influenced solos of trumpeter Hector de Leon and the alto saxophonist Choco de Leon.

Naak Out and Two Can are inspired by and dedicated to three great Dominican saxophonists: Mario Rivera, Carlito Estrada, and Sandy Gabriel.

I would be remiss if I did not mention the participation of the Dominican drummer, singer Jose Duluc and the percussionist Julio Figueroa, who tutored Austerlitz during the early stages of his research.

Paul Austerlitz has dedicated the better part of his life to studying world music cultures. His involvement with African-based cultures is motivated by mystical, creative needs and activism (social justice). Over the years he has become a “son” of the Dominican Republic and by extension, Haiti.

Dr. Merengue will introduce the book and the music to new audiences. Also, the Forward by Robert Farris Thompson is a must read. Highly recommended.