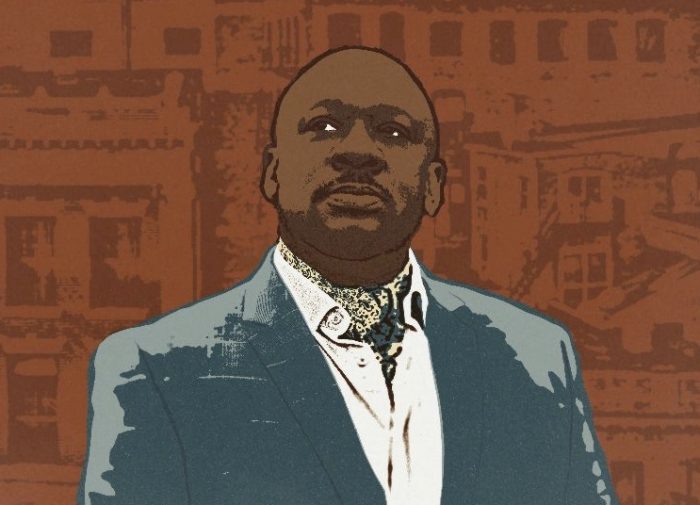 On May 21, 2021, Onyx Productions will release Raise Up Off Me, the final full-length album from the master drummer, bandleader and composer Ralph Peterson Jr. To be released one day after what would have been Peterson’s 59th birthday, Raise Up Off Me is a powerful closing statement by the jazz giant that was carefully and meticulously prepared before his passing earlier this month. Peterson’s longtime bandmates and collaborators Zaccai and Luques Curtis are featured here on piano and bass respectively, along with special guests Jazzmeia Horn and percussionist Eguie Castrillo. Raise Up Off Me will be available on all digital platforms, as a compact disc and a special edition double vinyl LP. A virtual listening event will take place around release week- details will be announced shortly.

Raise Up Off Me is Peterson’s 26th recording as a leader and the 28th for his Onyx Productions Music Label. A self-described statement on society, this musical log pulled from issues that were important to Peterson: drug addiction and recovery; the importance of and the complexities of mental health; social issues and Black Lives Matter; and overall, the delicate impermanence of the physical life. On the title, Peterson says in a written statement: “In this era where we still feel the foot on our necks, the pepper spray and mace that burns our eyes and face, the bullets and the batons, I find it necessary to remind you that Black Lives Matter… and for my life to matter, you have to raise up off me.” The resulting work is a stirring opus made up of five Peterson-penned originals, and other compositions by Zaccai Curtis, Bud Powell, James Williams, Patrice Rushen, and John Hicks. Jazzmeia Horn contributes a bonus track on the digital and LP version.

Raise Up Off Me was recorded entirely at Peterson’s own Onyx Recording studio in North Dartmouth, Massachusetts with engineer Dean David Albak on December 7, 8, and 9, 2020. The project finds Peterson at home with the Curtis Brothers, to whom he was a mentor and musical father. “It was always one of the greatest honors to play with Ralph. We loved him dearly and he always took the time to show us how much he loved us. This music is the pinnacle of what we’ve been striving for as a group. We are extensions of Ralph and his musical visions,” says Zaccai. Luques Curtis adds: “Ralph put a tremendous amount of love and thought into this recording knowing very much that it could be his last. He put his heart into this recording. I remember clearly how much fun he had planned it and his excitement throughout the recording process. I will always be grateful for the time I spent talking and learning from him on how to be a true Messenger of Music.” The Curtis Brothers released Triangular III with Peterson in 2016 (Truth Revolution Records), and they appeared on various recordings with Peterson in his later years. Notably, Zaccai is featured on Peterson’s 2020 masterwork Onward & Upward.

Ralph Peterson passed away on March 1, 2021, after a six-year battle with cancer. Peterson’s close confidant and musical brother Orrin Evans reflects on this crucial posthumous recording in his moving liner notes, which are excerpted below. A track listing follows.

If you knew Ralph Peterson, you knew whenever he titled a song or album, it directly correlated to something going on in his life. Art (1994, Blue Note) was Ralph’s tribute to his mentor, Art Blakey, who had just passed. Reclamation Project (1995, Evidence) was his way of telling us he was reclaiming his life and career. “The Trials of Trust and Treachery” off of Subliminal Seduction (2002, Criss Cross) was his homage to the difficulty but importance of long-term relationships. While Raise Up Off Me can easily be associated with 2020, the Black Lives Matter Movement, and the pandemic, the message I hear is Ralph’s fight to LIVE! Raise Up Off Me immediately makes me think of my 7:00 AM daily Facebook check. The first post to pop up would be Ralph running on a treadmill, walking, practicing martial arts, or just plain old inspiring through words. From the moment he was diagnosed with cancer in 2015 he fought! “Raise Up Off Me – I GOT SOME SHIT TO DO… and he did it!”

With the outstanding Curtis Brothers on the team, we are taken on a journey through Ralph’s musical and personal legacy. In 1985, Ralph recorded “Blue Hughes” with Out Of The Blue – a band of “young lions” including Ralph on drums and Kenny Garrett, Ralph Bowen, Robert Hurst, and Michael Mossman, to name a few. Thirty-five years later, he brings it back with a fresh new arrangement made perfect for the Curtis Brothers and special guest Eguie Castrillo. “Tears I Cannot Hide” from Subliminal Seduction gets an entirely different treatment with the addition of Jazzmeia Horn’s heartfelt vocals and original lyrics. The lyric “I am free, no more misery” speaks to my heart every time. Sprinkled within the record, you’ll hear Ralph taking the opportunity to pay homage to his mentors and elders. Compositions by Patrice Rushen, Bud Powell, John Hicks, and the great Walter Davis Jr., whom Ralph recorded with on Scorpio’s Rising, are all given new life.

Anyone who has experienced Ralph Peterson’s playing is aware of his deep feeling, “Respect for Truth,” and the remarkable clarity he communicates them. Also evident to the listener and bandmates is his dedication to uplifting everyone on the bandstand. When I last saw Ralph, he looked at a few of us sitting there and said, “I’m glad I played the way I played my entire life because I always gave my all and have no regrets”. As he was known to say while in the studio when asked to do a second or third take, “I meant what I played … did you?”

Years ago, I composed a tune in jest of Ralph. Ralph was confident, secure in his skin, and occasionally braggadocious. I didn’t always understand or appreciate where he was coming from, but I enjoyed his “Volition”. The tune was titled “Professor Farworthy,” a nickname a fellow musician came up with for Ralph. “Ralph is far more worthy in his head than the rest of the world thinks,” said the fellow musician. For 20 years, I privately laughed at the song but never told Ralph it was about him. A few years ago, while in a soundcheck, Ralph said, “let’s play ‘Farworthy’”. I was so paranoid because I had no idea he knew about the song. I looked over at him, and he laughed that loud laugh and said, “If I can be Farworthy, then you will be Savoir-fair!” Even in jest, Ralph found a way to compliment and “learn me” (Ralph’s saying). Savoir Faire was his way of saying I was everywhere but needed to focus on where I wanted to be musically and otherwise. At that moment, I realized Ralph did think he was worthy and Far More Worthy for that matter. Far More Worthy than the constraints of a record label, venue, jazz periodical, and any higher learning institution. But not only was he Far More Worthy, but we all were also. All of his students, bandmates, friends, family, and colleagues were better because we knew Ralph Peterson Jr. “Raise Up Off Me” I got shit to do, and SO DO YOU!”

Isadora Duncan: The Amazing Woman Behind the Song