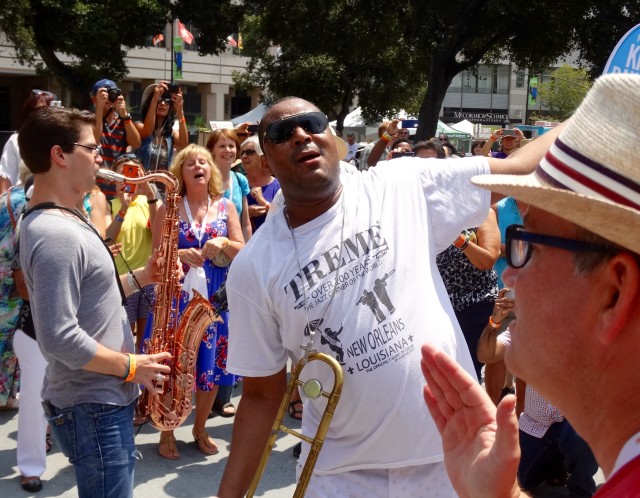 One of the delights of covering a music festival is discovering talent deserving of wider recognition. That was the case when I made my way to the Kaiser Permanente Main Stage just as Glen David Andrew’s band was taking the stage.

Not being familiar with Andrew’s music, I looked him up and found the following, quote: “Aside from being a great musician, Glen David has absorbed a fading tradition,” says Ben Jaffee, who runs Preservation Hall (New Orleans), where Andrews performs regularly. “He’s a link for his generation to something important, but he also has a rare enthusiasm and energy that makes it all special and exciting even for the casual listeners.” Though most contemporary band brass band musicians have embraced the more funk and pop-oriented sound of say, the Rebirth band, a shift that began some 30 years ago, Andrews always includes some of the old rhythms, spirituals, and trad-jazz tunes in his performances.”

Andrews is also known for pushing the envelope. “People think I’m New Orleans,” said Andrews during an interview with music photographer Jim Gilbert, “But I’m always going to be New Orleans because I was born there. That’s the Treme neighborhood; that’s 200 years of culture. I’m not afraid to play Gospel in a bar room, and I’m not afraid to play Rock in a church. I’m going to push the envelope every day because creatively, that’s where I want to go.”

And push the envelope he did!

Andrews and his band are a force to reckon with. Their music is an electrifying combination of Funk, R&B, Jazz, Gospel and Zydeco, a joyful and communal noise that prompts, even the most casual listener to lose their inhibitions, whoop, holler and shake the booty.

The highlight of the performance occurred when Glen Andrew and saxophonist, James Martin started up an organic second line (parade), which grew to huge proportions as enthusiastic revelers (including me) were only too eager to follow.

Andrews hails from a storied line of musicians. He was raised in the church and has fought and conquered his demons. His new recording titled, Redemption is a roof-raising tale of reflection, rebirth, and salvation.

“I’d say listen from the first song to the last,” says Andrews, It’s all about life experiences. Everyone’s been through something in life. I wrote it through the worst part of my life and the best part of my life.”

Moved by his story and his music, I’ve been listening to the album ever since.

The Kaiser Permanente Main Stage is one of thirteen stages and venues throughout San Jose, conveniently situated within walking distance of one another. Over three days, the festival served up every kind of music imaginable, including straight-ahead jazz, modern jazz, Latin jazz, Salsa, Funk, R&B, Funk, Swing, World Music and much more.