Last April, amid the pandemic, Garcia composed a tune whose tumbao, cadence and lyrics magically lifted his spirits. “The primary rhythm is Bomba Holandes, which shares rhythmic similarities with Plena. I wrote the bass line first and let it flow without realizing it was in 13 (meters). The vibe was so joyful and uplifting; the only name I could come up with is Alegria (Joy).”

As the lyrics clearly and joyously state:

Garcia became interested in Bomba when he was a student at the Inter-American University in Cupey (PR) and researched the genre. His friend, the percussionist Oscar Carrasco, suggested he study with Bomba musicians in Loiza, a region known for upholding Afro-Puerto Rican culture. “Also, I hung out with the Bombero, percussionist, dancer, Rafael Maya (leader of the group, Desde Cero), who taught me a lot about Bomba. I started to realize the richness of the rhythms, variations, and songs. So, all that led me to a way of fusing our own Puerto Rican and African roots with contemporary jazz.”

The video showcases the band’s prowess and Garcia’s vision. It also gives listeners and viewers an indication of how Puerto Rican music is evolving. “In terms of the music, Bomba culture and players tend to be conservative,” says Garcia. “I’m taking Bomba’s elements and expanding on them with, among other things, odd meters and modal harmonies. Occasionally, I will take a folkloric tune and mess with the chords a little, but mostly, it’s traditional.”

I’m happy to report, after a long COVID-related hiatus, Fernando and his Band will perform Friday, August 28, 2020, at 8 PM at Terraza 7’s Outdoor Concert Series. For information visit: http://terraza7.com/events/ https://youtu.be/2ydWNgCJZrQ

Born in San Juan and raised in Guaynabo, Puerto Rico, García studied guitar at the 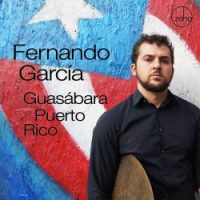 extension program of the Conservatory of Music of Puerto Rico and drumset at Micheo Music Academy (Santurce), while later receiving a bachelor’s degree in Música Popular from the Inter-American University of Puerto Rico (Graduating in May 2011). Furthermore, he was awarded the Juan Luis Guerra Scholarship to complete a master’s degree in Contemporary Performance at Berklee College of Music, Valencia, Spain (Graduating in July 2013). In May 2018, García completed a second master’s degree in Music Education at the prestigious Teachers College Columbia University.

In New York City, he has established himself as a drummer, percussionist, composer, and educator. Throughout his career, he has worked equally as a bandleader as well as a sideman. Some of the musicians García has toured and/or recorded with include Abraham Laboriel, Perico Sambeat, Ricardo Pons, Héctor Matos, Pepe Rivero, Alain Pérez, Guillermo Klein, Julio Montalvo, Victor Mendoza, John Benitez, Ximo Tébar, Nathaniel Townsley, Jim Ridl, Boris Koslov, and Miguel Zenón among others. As a bandleader, García has produced three studio recordings: Desde Arriba (Fernando García Music, 2012), Subidor (Montalvo Records, 2013), and Guásabara Puerto Rico (ZOHO Music, 2018).

Isadora Ducan: The Amazing Woman Behind the Song