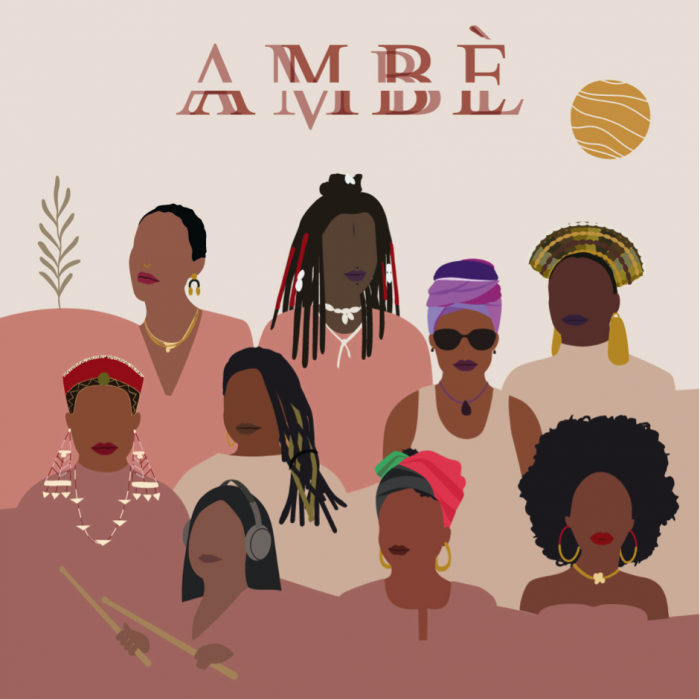 ‘AMBÈ’ OUT 25TH MAY TO COMMEMORATE AFRICA DAY

Celebrated Malian singer/guitarist/songwriter/actress Fatoumata Diawara has announced details of her new video clip ‘Ambè’. Composed during the first lockdown Fatoumata enlisted revered female musicians Angelique Kidjo, Dianne Reeves, China Moses, Inna Modja, Somi, Mayra Andrade, Thandiswa Mazwai, and Terri Lyne Carrington to collaborate on the track, which will be released on 25th May to coincide with Africa Day. ‘Ambè’ meaning ‘altogether’ in Bambara, underlines the importance of harmony and togetherness in difficult and challenging times, a theme Fatoumata often explores in her work. The unique collaboration between female artists of African origin or descent sends a message of cooperation and a world without borders.

‘Ambè’, a stand-alone and non-commercial release available only on YouTube and social media, is a project close to Fatoumata’s heart. Diawara invited each musician to contribute vocals and lyrics to a verse on the song and the parts were recorded remotely before being mixed together.

“Ambè means altogether,” explains Fatoumata. “The idea for the song came to me during the first lockdown. Countries were closing their borders because of the pandemic and I was very afraid. I was like ‘what should I do? what can I do? could we do something together?’. I was very afraid and at the same time, I felt a huge amount of hope. Hope for me has always come through my guitar and my voice. The first thing I did was cry and that always makes me feel better. The second thing was to sing and put a smile back on my face. I then had the idea to write a song to remind us all that no matter what color you are, which country you come from, if you’re rich or poor, a doctor or poor person on the street, we are all equal and all the same. COVID reminds us that we are all one and that we should fight for love instead of fighting over our differences. I didn’t want to write and record it alone, so I called out to women, my sisters. I could have contacted over 100 people and the song could’ve been one or two hours long. Obviously, that’s not possible nowadays so I opted for eight girls and it is already amazing to me. I would love for others to join in, perhaps 1000 women and we will keep singing to remind people that we are all one and this mentality will save future generations.”

Hailed as one of the most vital standard-bearers of modern African music, Fatoumata Diawara’s Grammy-nominated second album ‘Fenfo’ was released in 2018 to universal critical acclaim. Diawara has previously worked and toured with some of the biggest names in contemporary music, including Bobby Womack, Herbie Hancock, Damon Albarn, Sir Paul McCartney, David Crosby, Amadou and Mariam, and many others. She continues to pursue a successful career as an actress, including an acclaimed appearance in 2014´s Timbuktu (Le chagrin des oiseaux), which received both BAFTA and Academy Award nominations. Fatoumata, who won ‘Best Female Artist at last year’s African Talent Awards, recently co-starred in Damon Albarn and Abderrahmane Sissako’s theatre project ‘Le Vol du Boli’.

Four-time Grammy Award winner Angélique Kidjo, a creative force with thirteen albums to her name, featured in the BBC’s list of Africa’s 50 Most Iconic Figures. As a performer, her striking voice, stage presence, and fluency in multiple cultures and languages have won respect from her peers and expanded her following across national borders. Kidjo has cross-pollinated the West African traditions of her childhood in Benin with elements of American R&B, funk, and jazz, as well as influences from Europe and Latin America. Angelique also travels the world advocating on behalf of children in her capacity as a UNICEF and OXFAM goodwill Ambassador. She created her own charitable foundation, Batonga, dedicated to supporting the education of young girls in Africa.

Five-time Grammy winner Dianne Reeves is the pre-eminent jazz vocalist in the world. As a result of her breathtaking virtuosity, improvisational prowess, and unique jazz and R&B stylings, Reeves received the Grammy for Best Jazz Vocal Performance for three consecutive recordings – a Grammy first in any vocal category. Reeves has recorded and performed with Wynton Marsalis and the Lincoln Center Jazz Orchestra. She has also recorded with the Chicago Symphony Orchestra conducted by Daniel Barenboim and was a featured soloist with Sir Simon Rattle and the Berlin Philharmonic. In recent years Reeves has toured the world in a variety of contexts including “Sing the Truth,” a musical celebration of Nina Simone which also featured Lizz Wright and Angelique Kidjo. She performed at the White House on multiple occasions including President Obama’s State Dinner for the President of China as well as the Governors’ Ball.

Thandiswa Mazwai is one of the most influential South African musicians of this generation. Her influence in the post-millennial South African sound can be heard far and wide. New groups idolize and emulate her work, while globally, she effortlessly channels the legends such as Mariam Makeba, Busi Mhlongo, Fela, and Hugh Masekela. Mazwai’s debut album, Zabalaza (2004) reached double-platinum status and won numerous awards, including a Kora award for ‘Best African Female’ and was also nominated for the BBC Radio 3 Planet awards. Her critically acclaimed second album, Ibokwe (2009), reached gold status within weeks of release. Thandiswa has performed all over the world, including at the 2010 FIFA World Cup Opening Ceremony, and duetted with Paul Simon in Hyde Park, London during his Graceland 25th anniversary concert.

Unconventional and unfettered China Moses challenges conventions, breaking free of boundaries and constraints. Her mezzo voice glides silkily on sumptuous ballads, filled with passionate syncopation – unadorned, yet immodest. She is the rare young, female artist – capable of swinging with the finest and drawing on her innate mastery of tempo. Her R&B heritage allows her to smile around a phrase, carry emotions across a lyric and infuse profundity in every note.

Inna Modja is a Malian singer/songwriter, actress, and climate and female rights activist. A United Nations climate change ambassador and leader of The Great Green Wall Project, Inna has also been fighting against female genital mutilation for the past 15 years. She was subjected to genital mutilation when she was a little girl in Mali and the experience left her feeling worthless. However, through music, she found the power to be strong and now promotes her beliefs through music and activism.

Mayra Andrade is an award-winning artist from the West African islands of Cape Verde. Her music is as diverse as the places she has called home. She has lived in Cape Verde, Senegal, Angola, Germany, France, and, currently, Portugal. Mayra’s music presents traditional Cape Verdean rhythms with a different projection, breaking borders, creating precedents, and always exploring new angles.

Vocalist, composer, and playwright Somi Kakoma was born in Illinois to immigrants from Uganda and Rwanda. Known in the jazz world simply as ‘Somi’, she has built a career through transatlantic storytelling. Her last studio album ‘Petite Afrique’ (Sony, 2017) was a song cycle about African immigrants in the midst of a gentrified Harlem in New York City that won her an NAACP Image Award for Outstanding Jazz Album. It was also the highly anticipated follow-up to Somi’s acclaimed major label debut ‘The Lagos Music Salon’ (2014), which was inspired by an 18-month creative sabbatical in Lagos, Nigeria, and entered the top of US and international jazz charts. Both albums earned her ECHO Jazz Award nominations for Best International Jazz Vocalist. Often celebrated for her activism, Secretary-General Ban Ki-Moon asked Somi to perform at the United Nations General Assembly in commemoration of the International Day of Remembrance of the Victims of Slavery and the Transatlantic Slave Trade

With technical wizardry and profound creativity, NEA Jazz Master, Terri Lyne Carrington, has become one of the giants of today’s jazz scene. A three-time GRAMMY Award-winning drummer, composer, producer, and educator, Carrington began her professional career at only ten years old and received a full scholarship to Berklee College of Music at the age of 11. She is the first female artist to ever win the GRAMMY Award for Best Jazz Instrumental Album, which she received for her 2013 work, ‘Money Jungle: Provocative in Blue.’ Carrington has played with Herbie Hancock, Wayne Shorter, Lester Bowie, Cassandra Wilson, Dianne Reeves, Stan Getz, Al Jarreau, John Scofield, Pharoah Sanders, and Esperanza Spalding among countless other jazz luminaries.

We are the same, we are all the same

I, too, sing for all that is life
Let it be, let it be

I, too, sing for all that is life
Let it be, let it be

Why would I sing alone when we can sing together?
Let’s love each other while we are among the living.

We are the same, we are all the same

Children will hear stories
of a time of many struggles and hope,
of the blood that was spilled,
So that we could leave them
a new world, new world

We are the same, we are all the same!