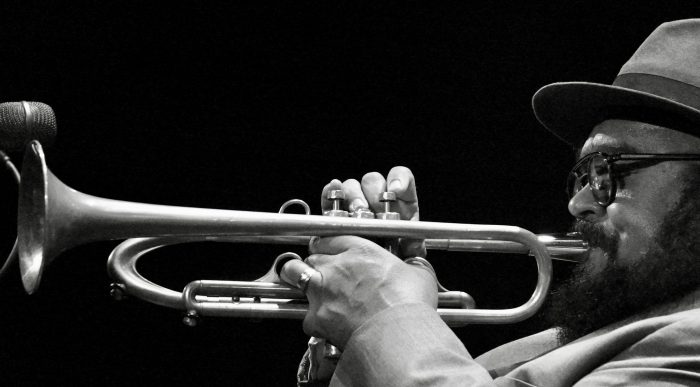 The mood was upbeat and celebratory as the Grammy winner, trumpeter, educator Charlies Sepulveda and the Turnaround launched a three-night residency at Dizzy’s (Jazz at Lincoln Center) in the heart of midtown Manhattan.

Sepulveda resides, teaches, and performs in Puerto Rico but he is no stranger to the Big Apple. He honed his craft there in the 70s and 80s alongside his cousin, Eddie Palmieri, Tito Puente, Mongo Santamaria, and Dizzy Gillespie among others. Today, he is the Musical Director for the Jazz at Lincoln Center and the Rockefeller Foundation. Also, he is a professor at Puerto Rico’s Conservatory of Music and leads the Turnaround.

The event at Dizzy’s was historic for a variety of reasons. After a long absence, it marked Sepulveda’s return to a New York stage. Also, it brought together a once-in-a-lifetime lineup that included the trumpeter, Randy Brecker, trombonist Steve Turre, saxophonist Miguel Zenon and flutist, Nestor Torres. Also, the repertoire included selections from the albums, Songs for Nat and Mr. E.P. – A Tribute to Eddie Palmieri and contemporary interpretations of the music of Perez Prado, Dizzy, Gillespie, Tito Puente, Mongo Santamaria, and the Argentine composer, Ariel Ramirez.

The Turnaround is a multi-generational conglomeration of established and emerging virtuosos, who seamlessly fuse Latin jazz, Hard Bop, and Afro-Caribbean rhythms. “Today, what is called ‘Latin Jazz’ is different in so many ways. Earlier it was oriented towards Afro-Cuban styles,” says Sepulveda, “I play the traditional form of Latin jazz mixed with hard bop and Puerto Rican styles like Bomba, Plena, and Danza.”

The performances, which were entirely sold out, did much to dispel the misconception that Puerto Rico lacks a robust jazz scene and jazz players. Also, it clearly demonstrated a demand for Puerto Rican artists and music that, generally speaking, is not being met.

Those who, for one reason or another, could not attend will be happy to know HighNote Records recorded the event for posterity.

Although many people may not realize it, Puerto Rico is the home of a vibrant and thriving jazz scene. It is here that Latin Jazz trumpeter Charlie Sepúlveda lives and does the bulk of his playing but he is certainly no stranger to New York City.

Born in the Bronx, Sepúlveda appeared regularly in the Big Apple throughout the 70s and 80s with his cousin – a Latin Jazz pianist of some notoriety named Eddie Palmieri – and the likes of Mongo Santamaria, Dave Valentin, Tito Puente, and countless others.

Charlie Sepúlveda is currently a Professor at the Puerto Rico Conservatory of music and leads one of the island’s most popular jazz ensembles, The Turnaround. The band is a collection of celebrity jazz chefs who mix together a tasty dish of Latin Jazz, hard bop, and Afro-American rhythms.

“Today, what is called ‘Latin Jazz’ is different in so many ways. Earlier it was oriented towards Afro-Cuban styles,” Charlie said in an interview, “I play the traditional form of Latin jazz mixed with hard bop and always with Puerto Rican styles like Bomba, Plena, and Danza.”

So it was only natural that Sepúlveda named this live recording from NYC’s jazz Mecca Dizzy’s Club, This is Latin Jazz since it features the type of music the trumpeter grew up playing and on which he cut his musical teeth. An all-star group of his colleagues showed up to play with the band, including Randy Brecker, Miguel Zenón, Steve Turre, and Néstor Torres. Sepúlveda’s wife Natalia Mercado also provides a vocal on the touching ballad, “Alfonsina y el Mar.”

An important recording from one of the most beloved and respected instrumentalists, leaders, and composers in Latin Jazz, Charlie Sepúlveda.

THIS IS LATIN JAZZ is available on all digital platforms and Amazon.com