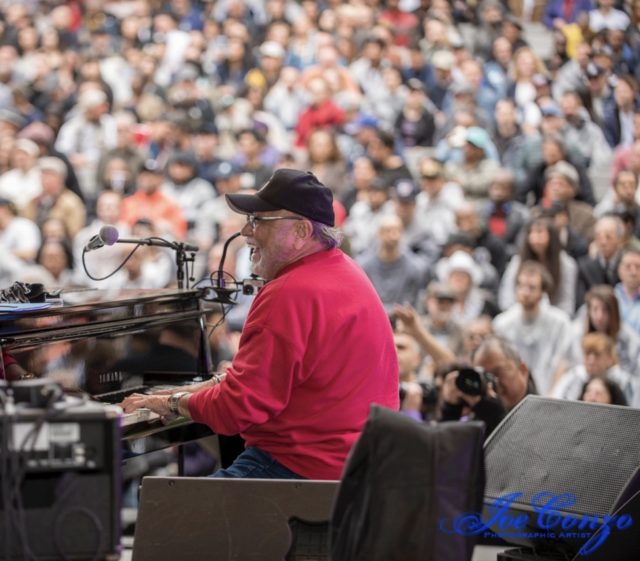 The festivities were divided into two segments: Latin jazz aka “instrumental mambos,” and an “Afro-Caribbean dance-set” of Nuyoricanized Salsa Dura (Hard, solid clave with traditional flavor). 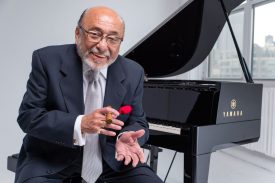 Palmieri opened with a solo-piece dedicated to his late wife, Iraida and continued in “honoring mode” with loving words about Mama Julia, his paternal grandmother, an enslaved African and the source of the rhythmic patterns that are his “life’s pulse.” Also, warm mention of his late elder brother and master musician (pianist) Charlie Palmieri; JALC’S Artistic Director, Wynton Marsalis and the late Frank “Machito” Grillo, Tito Puente and Thelonious Monk, all iconic figures in his musical matrix.

In tune with Ęlégbá and Ifá respectively (Yorùbá – Lukumi cosmic energies of “Opening Roads” and “Universal Wisdom embodied in select Palm Trees) El Maestro performed a savory, laid back rendition of “Palmas,” with the full orchestra. Afterward, he let it be known – with gusto – “This is the greatest band I’ve ever played with!”

Touching moments abounded as Maestro EP paused between tunes to share powerful, reflective anecdotes and oral histories. Might we surmise the transformative power of his growl as he turns painful historical legacies into euphoric compositions? At one point, he noted, with intensity – Spain and Africa produced the “Mulato” (a person of mixed race). Despite the inhumanity that created him, the drum was re-created and brought happiness to the world with El Caribe as the epicenter.”

MR. EP’s personnel included sixteen musicians, including him self, as sixteen is a sacred number with the Yoruba cosmology. In that context, the fraternal order of players “threw down” with universally encoded À ṣ e̩ (ah-shay or aché),  a West African metaphysical thought articulated through Yoruba – Lukumi culture that embraces, “the power to make things happen.”

In all, there were consistent blasts from the unified brass section; musical warrior angels on trumpets, trombones and saxophones that raised eyebrows as they played in sync with a rock solid rhythm section marinated in signature Palmieri school of “Clave Afincao y Aguanto” (tension and release in 2/3 time, meter structured and controlled).

As the late science-fiction author, Robert Heinlein coined, we (the audience) “GROK” (understand something intuitively or by empathy) the full spectrum of Master EP’s musical messages.

At the age of 80, Mr. Palmieri continues to “download” the latest solar sourced inspirations, edify his family, ancestral relations, his elders, his band, and the audience, indicating that he understand the formula. Eddie Palmieri “GROKS” and continues to rock.

Contained here are links to sample Maestro EP’s work with trimmed down core personnel of JALC’s March 3 + 4 2017 performance. Nothing like live! Enjoy and savor!