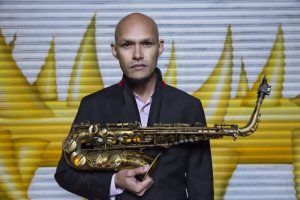 Recorded in May 2019, after a residency at Bird’s Eye Jazz Club in Basel, Switzerland, the album features Zenón with an international quartet: tenor saxophonist Ariel Bringuez, bassist Demian Cabaud, and drummer Jordi Rossy. Though the musicians – all with connections to Zenón – had never played together in this particular configuration, the performances display remarkable synergy and intensity. The release will be available digitally on March 12, 2021.

As Miguel writes in the liner notes, “We were all just having fun, inspired by the energy from the crowd and the special feel of the occasion. And Ornette’s music proved to be the perfect platform for this kind of engagement: the kind of music that opens the door to endless possibilities for interaction and pushes you to hit the ground running.”

A special aspect of the quartet is that each member hails from a different part of the world. “I’m Puerto Rican, Ariel is Cuban, Demian is Argentinian, and Jordi is Catalan,” says Zenón. “The fact that we are all from different parts of the globe and all Spanish speakers raises another important point: Jazz music knows no boundaries or labels; it is as inclusive now as it has ever been.”

Coleman has long been one of Zenón’s musical heroes. The first time he heard Ornette’s music, Zenón was a teenager still living in Puerto Rico. “I just kind of stood there, mesmerized and in shock, trying to figure it out,” he says. “It was entirely different than anything I had heard before. There is freedom there, and lots of it. But there’s also a deep sense of cohesiveness and structure. And, above all, melody: beautiful and inspired melodic lines that serve as springboards for everyone involved.”

Later, Zenón was fortunate enough to meet Ornette. He remembers their interactions fondly. “He was always nice and supportive,” says Zenón. “Our interactions went pretty much the same way every time. Me: ‘Mr. Coleman, I’m not sure if you remember me – my name is Miguel, and I’m an alto saxophonist and one of your biggest fans.’ Ornette: ‘Nice to see you, Miguel. Have you ever thought about what would happen if you played A and Eb at the same time?’.”

Playing a concert of exclusively Ornette Coleman music proved to be magical, exciting, and more bittersweet than the quartet knew. “As I listen to the music,” says Zenón, “it almost feels like a different time. A time when we weren’t afraid to be close to each other. A time when we could still play in a packed room, with the audience right in front of us, and just feed off their energy. A time that will come back soon enough. And when it does, we’ll be ready to do it all over again.”

A multiple Grammy® nominee and Guggenheim and MacArthur Fellow, Zenón is one of a select group of musicians who have masterfully balanced and blended the often-contradictory poles of innovation and tradition. Widely considered one of the most groundbreaking and influential saxophonists and composers of his generation, Zenón has also developed a unique voice as a conceptualist, concentrating his efforts on
perfecting a fine mix between jazz and his many musical influences. Born and raised in San Juan, Puerto Rico, Zenón has recorded and toured with a wide variety of musicians including Charlie Haden, Fred Hersch, The SFJAZZ Collective, Kenny Werner, and Bobby Hutcherson. Zenón’s 2021 releases will also include the fall release of an album with his long-standing quartet.