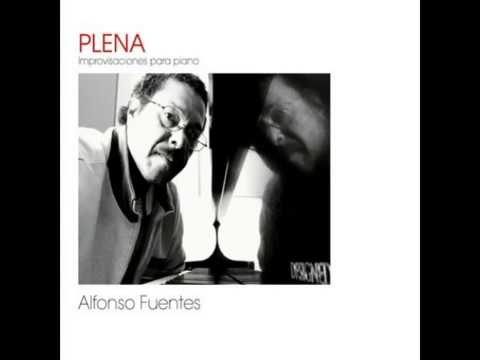 One pleasure of writing about music is “discovering” talent deserving broader recognition. More often than not, new talent, but occasionally I come across an established artist who, for one reason or the other, escapes me. I came to the music of ALFONSO FUENTES through the Puerto Rican multi-instrumentalist and icon WILLIAM CEPEDA, who featured the pianist on a bonus track on (the DVD) Bomba Jazz (Casabe Records).

Fuentes was born and raised in Puerto Rico. He is a composer, pianist, and Associate Professor of Orchestration and Composition at the Music Conservatory of Puerto Rico. He draws inspiration from a wide variety of styles and expresses his “Puerto Ricanness” through classical music, North American jazz, tropical music, folklore, and international influences.

He is best known for his work with chamber ensembles and symphony orchestras and remarkably is better known in China, with who he shares a special relationship than in the U.S.

Plena, Improvisaciones Para Piano is his first “commercial” outing. Also, a significant step in the evolution of his career. The title (Plena) refers to the popular folkloric rhythm mostly known as “the sung newspaper.” According to Fuentes, Plena is also a musical “gift” during times of joy and pain.

Improvisaciones Para Piano was recorded at the Puerto Rico Conservatory of Music in sessions going back to 2009. With the exception of the melody, “Cortaron a Elena“ (They Cut Elena, click to listen), popularized by Manuel Jiménez “Canario” and Cortijo and his Combo) the material is performed spontaneously and at the moment.

Montuno #1 and #2 compares and contrasts elements of Salsa and Latin Jazz; Memories Campesinas (Countryside Memories) consists of variations of the Puerto Rican Seises, the Celinés, and the Milonga; Plena Por Pensamiento (Plena for Critical thinkers) is just that!

This is not, what some might consider, “typical” Puerto Rican music, nor is it meant to be. The music unique and stands on its own, which, in my opinion, makes it one of the most important recordings to come out of Puerto Rico in recent years. Highly recommended.

Renown Musicians, Artists to Unite in the World’s First “Concert for Cuba”