Home Reviews 2022: The Year in Music, Literature, and Films 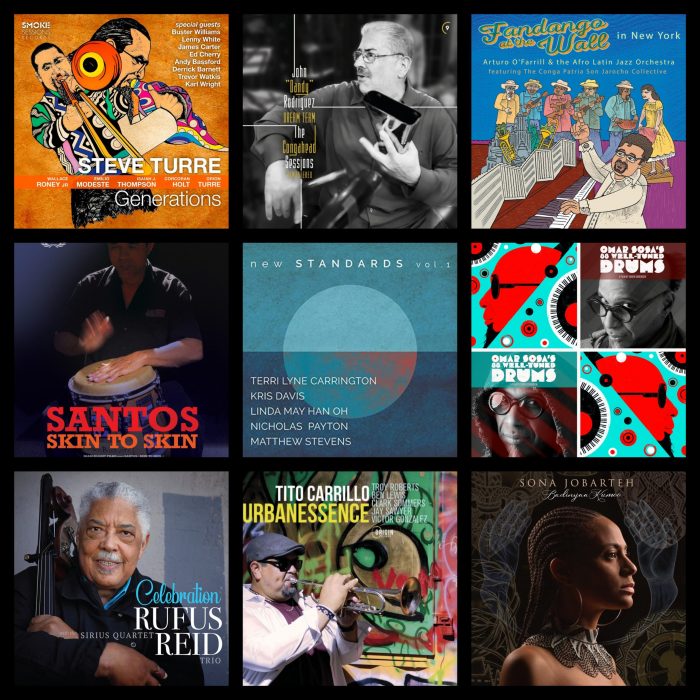 If you are seeking a list of “Best Recordings of 2022,” this is not it. At best, this is a sampling of the recordings, literature, and films I enjoyed this year, in no particular order. I can’t recall a year when so many new and innovative recordings came to my attention, many of them late entries. Doubtless, given the sheer volume, many recordings, books, and films fell through the cracks. If the list makes you aware of one recording, book, or film you are unaware of and is worthy of your attention, I will consider my job done. I wish you all a Happy, Healthy, Prosperous New Year and Muchas Felicidades!

Conrad Herwig – The Latin Side of Mingus (Savant)

After twenty-five years as a member of the Mingus Big Band and a long stretch with Eddie Palmieri’s ensemble reimagining, Mingus’s repertoire in a Latin format was a no-brainer for Conrad Herwig. “Mingus is very near and dear to my heart. It was a labor of love,” said Herwig to the radio show host, Bobby Sanabria. “Also, much of Mingus’s philosophy is as important or more important today as it was when he was alive and playing and composing. We are trying to keep that legacy.” The innovative arrangements, propulsive rhythms, exciting solos, and the consummate musicianship of Herwig and his bandmates make “The Latin Side of Mingus” an instant jazz and Latin classic. Highlights include “Gunslinging Bird,” “Don’t Let it Happen Here (featuring Ruben Blades), and “Goodbye Pork Pie Hat.” PURCHASE

Sona Jobarteh is the first professional female Kora virtuoso from any West African Griot dynasty. Her lineage carries a formidable reputation for renowned Kora masters; most notable are her grandfather Amadu Bansang Jobarteh and her cousin, the legendary Toumani Diabaté. Sona is reputed for her instrumentalist skill, distinctive voice, infectious melodies, and grace onstage. Her music is uniquely poised between preserving her rich cultural heritage and an accessible, modern style that relates to the current era and audiences worldwide. At the heart of Jobarteh’s success is her dedication to humanitarian activism in social development and educational reform in Africa. She is the Founding Director of The Gamble Academy, an institution dedicated to educational reform for Africans in Africa. Jobarteh’s most recent recording is a soulful and mesmerizing affair. Featured guests include Musa Filly Jobarteh, Youssou N’Dour, Ballake Sissoko, Ravid Kalahani, Jack Webb, Kirk Whalum, and Zihirina Maiga. PURCHASE

Steve Turre was passed the jazz torch early in his career by some of the music’s greatest masters – Art Blakey, Rahsaan Roland Kirk, Woody Shaw, and Ray Charles, among others. In recent years he’s kindled the same flame in a younger crop of rising stars. On his new album, “Generations,” Turre brings the eras together, inviting still-vital legends to join a talented band of rising stars to pay tribute to the elders who have helped shape his sound. Generations feature players including the trombonist’s son, drummer Orion Turre, and trumpeter Wallace Roney Jr., whose late father was a close friend and collaborator of Turre’s. In addition, the youthful core band includes pianist Isaiah J. Thompson and bassist Corcoran Holt. Throughout the album, this stellar group is joined by saxophonist James Carter, guitarists Ed Cherry and Andy Bassford, keyboardist Trevor Watkis, bassists Buster Williams and Derrick Barnett, drummers Lenny White and Karl Wright, and percussionist Pedrito Martinez. “There’s a balance between youth and age,” Turre says, “Age brings wisdom and knowledge, and youth brings enthusiasm and energy. Playing with each of them stretches me differently. The elders stretch me in ways of wisdom, but the youngsters fire it up. All of that is inspiring.” PURCHASE

John Coltrane was at the forefront of many important directions in jazz in the 1950s and 1960s, including that labeled hard bop, modal jazz, avant-garde jazz, and world music. One interest that became an increasingly dominant focus for him in his later years was the study of Indian music and spirituality. While Coltrane’s music remained firmly rooted in jazz, this exploration was an important part of the development of Coltrane’s style from the early 1960s to the end of his life in 1967. Also, it’s not such a stretch to seek affinities between Miles Davis and India. As one of the chief proponents of modal improvisation in jazz, he occasionally reached in that direction. And a handful of his former sidemen, notably the guitarist John McLaughlin, went on to explore Indian music more deeply and directly. “Between Us…” was recorded in 2018 during a stint of shows in the Netherlands and is Anoushka’s first live album since 2001’s ‘Live At Carnegie Hall.’ It gleans material from four solo albums, 2005’s ‘Rise,’ 2013’s ‘Traces of You,’ 2015’s ‘Traveller,’ and 2016’s ‘Land of Gold,’ also featuring one previously unreleased track. Ravi Shankar’s regular collaborator joins Anoushka as does Manu Delago alongside Holland’s Metropole Orkest, directed by renowned conductor and arranger Jules Buckley. Anoushka Shankar’s music is transportive and mesmerizing. PURCHASE

“Urbanessence,” the second solo album by veteran trumpeter and composer Tito Carrillo, is an homage to the funky beauty and unique energy of city life—where profound human connections are established daily with those who look and speak differently from one another and where the art, language, and delicacies from every tribe are celebrated. Cities are home to the creators, the visionaries, and the innovators, who marshal armies of people motivated by the hope they provide and the vision they impart. For the artists themselves, the city is their playground. With saxophonist Troy Roberts, pianist Ben Lewis, bassist Clark Sommers, drummer Jay Sawyer, and percussionist Victor Gonzalez, Carrillo channels and celebrates the black music traditions from the three Americas through this set of 10 original compositions. PURCHASE

Rufus Reid with the Sirius Quartet and Trio (Sunnyside Records)

The great bassist Rufus Reid has long established himself as one of the most important stylists on his instrument, but he is not one to stick to one lane. He has stretched his musical capabilities far into the ranges of composition and arranging, making his music a confluence of jazz and classical sounds. His album “Celebration” showcases Reid’s command as an instrumentalist and writer, as his Out Front Trio performs with and without the Sirius Quartet. PURCHASE

The title, Mélange, is taken from the French word for “mixture” and was chosen by Kalí as an apt way to briefly understand the music that brought him to where he is today. Drawing from bebop and post-bop; Cuban timba, salsa, and rumba; and world music from India and the Caribbean, Mélange truly stands by its definition and creates an eclectic yet seamless blend of musical traditions and heritages that shine with a mosaic ebullience. In addition, Mélange embodies Kalí’s unique perspective on music. “The way most people listen to music today – the playlist – is a mélange of different albums and artists,” explains Kalí. His view has led him, both in performance and composition, to think of his genre-fluid music not simply as the sum of its myriad influences but as a new category in the listening experience. “I call it 21st-century music, millennial music, or playlist mode music,” he says.

T. J. English’s “Dangerous Rhythms: Jazz and the Underworld” is not so much about jazz music as it is about the business of jazz and how and why organized crime got its hooks into it. It was an odd relationship and productive for both sides, but there was a downside. On the one hand, because bent nose-types ran the clubs that nobody messed with, musicians such as Louis Armstrong, Earl “Fatha” Hines, Fats Waller, Lena Horne, and Ell Fitzgerald had steady incomes and opportunities that otherwise might not have existed. Still at the heart of the relationship was festering racial inequality. TJ English also includes players such as Al Capone, Meyer Lansky, and Charlie “Lucky” Luciano, among others. Through English’s masterful research and keen narrative skills, Dangerous Rhythms reveals a fascinating and disturbing slice of American history. PURCHASE

“Omar Sosa’s 88 Well-Tuned Drums” is a feature-length documentary film on the life and music of Cuba-born pianist and composer Omar Sosa. Multiple Grammy-nominee Omar Sosa is one of the most versatile jazz artists today. He fuses a wide range of jazz, world music, and electronic elements with his native Afro-Cuban roots to create a fresh and original sound. This film is a must-see if you appreciate jazz and Cuban music! As I write this, the award-winning film is being screened at film festivals worldwide (release date to be announced).

An intimate portrait of the maestro and quiet genius who speaks with his music brought the upright bass out of the shadows and into the spotlight. Ron Carter is among the most original, prolific, and influential bassists in jazz. He has recorded over 2200 albums and, over his 60-year career, has recorded with many of the jazz greats, including Lena Horne, Bill Evans, B.B. King, Dexter Gordon, Wes Montgomery, Bobby Timmons, Eric Dolphy, Cannonball Adderley, Jaki Byard to name a few. From 1963 to 1968, he was a member of the acclaimed Miles Davis Quintet. PURCHASE

“Skin to Skin” is a documentary about master Latin Jazz percussionist and community activist John Santos. An urban legend, Santos is acknowledged as a “keeper of the Afro-Caribbean flame,” using music to navigate the politics of culture, global migration, and his Puerto Rican heritage. The film is saturated with music and features concert performances with Santos, his Sextet, and a cadre of international jazz luminaries. The camera follows him through the streets of San Francisco – from rehearsals in his garage to performances at local community centers.  And we see Santos in demonstrations supporting housing rights and gigs with “Congueros” in the barrios of Puerto Rico. Ultimately SKIN TO SKIN is a portrait of an artist who juggles the daily challenges of life: supporting family, creating art, and the quest to propel Afro-Caribbean culture onto the world stage.