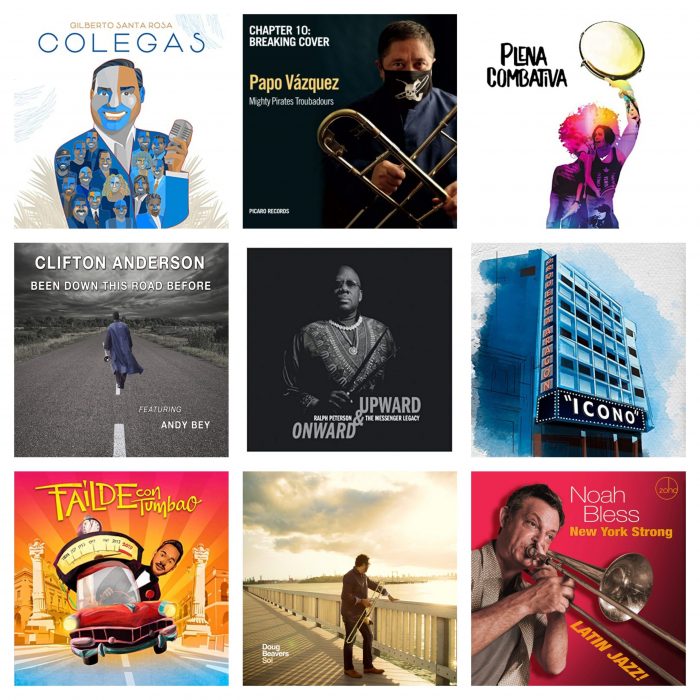 The following are some of the recordings, virtual performances, podcasts, books that lifted my spirits, enlightened me, and made life amid the pandemic bearable. If you like what you hear (see, read), please support the artists by purchasing music directly from the artist’s websites. Or via Bandcamp. You can also help by offering moral support and spreading the word.

Inspired by the success of 2019’s album Pop, a project Beavers produced and played on for the Yellow House Orchestra, he found himself on a writing retreat in the Spanish port town of Sitges. In a café facing the Balearic Sea as the sun began to fade, Beavers laid out a series of manuscripts that would eventually transpire into Sol. “It was the vibe of the sun telling me everything is going to be OK. I just took my score paper, and the music immediately started pouring out,” Beavers recalls. “We’ve all been through a lot in 2020, and I wanted to record a New York album that uplifts people and puts smiles on their faces. I know that sunshine has that natural effect on me; thus, I named the album Sol.” http://www.dougbeavers.com

Been Down This Road Before delivers a musical message at a time when racism, greed, injustice, and a deadly pandemic are jeopardizing our ability to exist harmoniously with one another and our planet. The culmination of several years of work is brought to life by eighteen sensational musicians. Been Down This Road Before is swinging, timely, and an instant classic. http://cliftonanderson.biz

Santa Rosa and friends are in top form. The production, arrangements, and repertoire, which consists of original material and interpretations of Puerto Rican and Cuban classics, are top-notch. The music is festive, danceable, and uplifting. In my opinion, Colegas is the best Salsa recording of the year. Regrettably, Tito Rojas (El Gallo Salsero) died shortly after the recording and video were completed. https://www.facebook.com/gilbertosantarosa

Con Tumbao is the next best thing to experiencing Orquesta Failde in a live setting. Over eight tracks (available in digital format only), the band performs a magnificent, diverse repertoire that spans over a century of Cuban music: Guests include Omara Portuondo and the Puerto Rican sonero, Andy Montanez. The production, compositions, arrangements, and performances are outstanding. https://www.facebook.com/OrquestaFailde/

Chapter 10: Breaking Cover features a varied program of Vázquez’s original music that displays his signature fusion of jazz and Puerto Rican folkloric music. Also, it demonstrates why he is one of the leading voices of the contemporary Latin jazz scene.

Vázquez’s latest release is a true product of the COVID 19 era. Conceived before the coronavirus was on anyone’s mind, Vázquez’s plans to record this past April were derailed when lockdown regulations came into effect. Finally, in June, when gatherings of 25 people or less were approved in the tri-state area, Vázquez and his Mighty Pirate Troubadours “broke cover” to rehearse and record. As writer Ben Ratliff says in the liner notes: “Papo’s music contains a lot of the past, in salsa and jazz and jíbaro music and bomba and plena; as one of this country’s greatest musicians, he has a lot to summarize. But the circumstances behind this serious and wise record—as well as the life-force of Papo’s playing, arranging, composing, and the decisive way he moves through the world—inevitably convey the present.” https://www.papovazquez.com

“Master drummer Ralph Peterson continues to advance the continuum of his late mentor Art Blakey on Onward & Upward, his ambitious and expansive 25th release as a leader. On this historical release, Peterson brings together 14 former Jazz Messengers and three Legacy Messengers to write a new page in the Jazz Messenger songbook. He kept his signature tunes in the set, but he also required his musicians to compose and arrange—to replenishing the repertoire. That demand for fresh ideas and personal development while also honoring the jazz tradition? It’s great to play and honor those tunes. But to write a new page in the Jazz Messengers songbook, that’s what Art expected of us.” http://www.ralphpeterson.com

Cuban Icons, Orquesta Aragon, celebrate 80 Years, and what a celebration it is! As always, the Orquesta is in top form. Also, it features new, contemporary material, no doubt inspired by Rafael Lay Jr. (son of the leader, Rafael Ray, Sr.). The song (and video), Aquella Chica (That Girl) are worth the price of admission!