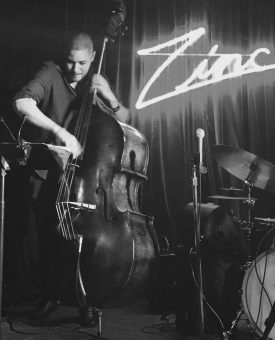 It’s not often the public see’s a student pay tribute to his mentor in such an intimate way. Especially when the pupil is the prominent bassist Luques Curtis, and the teacher is the renowned, Andy Gonzalez.

At the Zinc Bar, Luques shared anecdotes and a repertoire that embodied Andy’s influence. Also, he explained how meeting and studying under Andy changed his life.

The two met when Luques and his brother the pianist, Zaccai Curtis were teenagers and members of the group, Latin Flavor. On the same bill, Andy appeared with Ed Fast’s band. Afterward, Andy approached Luques, struck up a conversation and launched into a diatribe about the fundamentals of the bass. It was the beginning of a long and beautiful friendship.

Luques, who was joined by the pianist Manuel Valera, the drummer Willie Martinez and the percussionist Camilo Molina performed tunes such as Orquesta Aragon’s Guajira con Tumbao, which Andy exposed him to as a teenager. Also, songs from the Fort Apache Band and Manny Oquendo and Libre’s repertoires and others with commanding bass lines and percussive elements.

On a historical note, the evening could not have been more significant. With Jerry Gonzalez gone and Andy’s bass virtually silent due to illness the need to pass the torch, from one generation to the next, was evident. Also, given the circumstances, what are the odds of seeing Luques and Andy in the same place, at the same time again?

Everyone who knows Andy understands that he is a man of long silences and few words, but as the set came to a close I saw Andy give Luques a nod of approval and a congratulatory thumbs up.

The icing on the cake (no pun intended) was Abby Curtis (mother of Luques and Zaccai) who baked a cake and decorated it with a likeness of Andy and Luques and served it to the audience.

Among those in attendance were Jerry Gonzalez’s daughters, Xiomara Amelia and Marisol, Ted and Abby Curtis, the documentarians Richie Brinez and Alfie Alvarado, the journalist Russ Musto, the bassist Joe Santiago (who also played a significant role in Luques’ development) and the trumpeters Carlos Abadie and Kali Peña, who sat in with the band.

Thanks to TJ English’s Dangerous Rhythms series and the Zinc Bar for providing the platform and the good vibes. 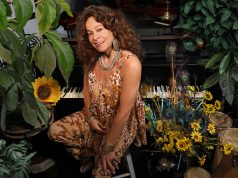 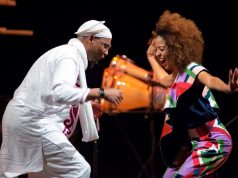 Behind the Music Pt. 1

Leopoldo Fleming – The Boricua Who Played for Mama Africa and...