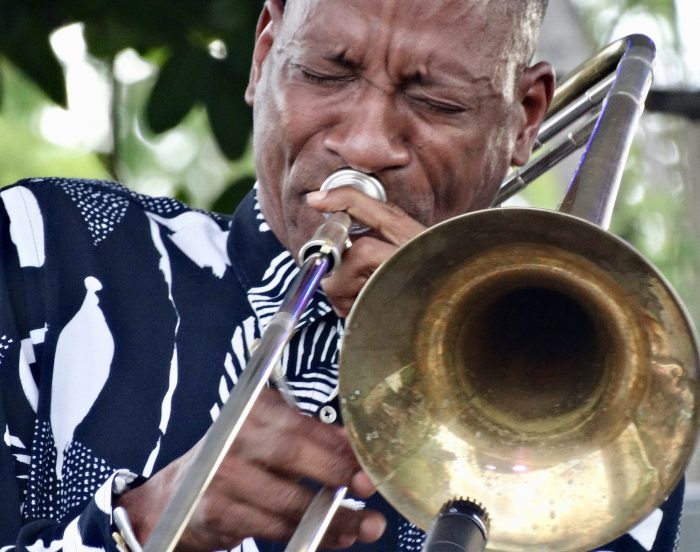 On Sunday, May 19th Cepeda kicked off a 3-concert tour. It marked the first time The Ponce Museum of Art, The Culebra Foundation, and the University of Puerto Rico (Rio Piedras) received funding from Chamber Music America, a national service organization that supports national ensemble and musicians.

William was born and raised in Loíza (“Little Africa”), where he grew up in a musical environment, and a family renowned for defending and preserving Afro-Puerto Rican music and culture.

William’s discography as a leader includes Bombazo, a percussion project nuanced by Afro-Boricua folklore and voices and My Roots and Beyond, where he fuses Puerto Rico’s folkloric music with jazz. Also, he is the author of the encyclopedia La Musica de Puerto Rico, Raices y Evolucion. In the classical realm, he composed a full-length orchestral work for a symphony, opera, choir, and soloists titled Bomba Sinfonica. Recordings in-the-works include sea-shells and a rhythm section; another with a quartet; and Etnia Jazz, recorded live at the Puerto Rico Heineken Jazz Fest.

Before the show, William spoke about Afro-Rican Jazz and the significance of performing at The Ponce Museum of Art. “Afro-Rican Jazz signifies Puerto Rico’s energy, personality, richness, and culture. When I was a child, most of the music was Cuban-based. Puerto Rican Jazz did not exist. The performance at the Ponce Museum of Art is historic because it marks the first time I present the concept at a prestigious institution in front of a live audience. We hope the audience enjoys the show and supports the music.”

William’s group presented a diverse and exciting repertoire that carried an important message. “There is a great wealth of music in Puerto Rico and it’s possible to fuse our music with other genres, such as classical, urban, popular music and jazz without losing the characteristics of our musical roots.”

Cepeda’s other projects include the Lo Nuestro Tour, which presents Afro-Rican Jazz, master classes, and workshops for young musicians throughout the island.

William Cepeda and his Afro Rican Jazz will perform on Saturday, June 22, on the island of Culebra and on Friday, June 28 at the Theater of the University of Puerto Rico, on the Campus of Rio Piedras as part of Chamber Music America’s Presenter Consortium for Jazz.