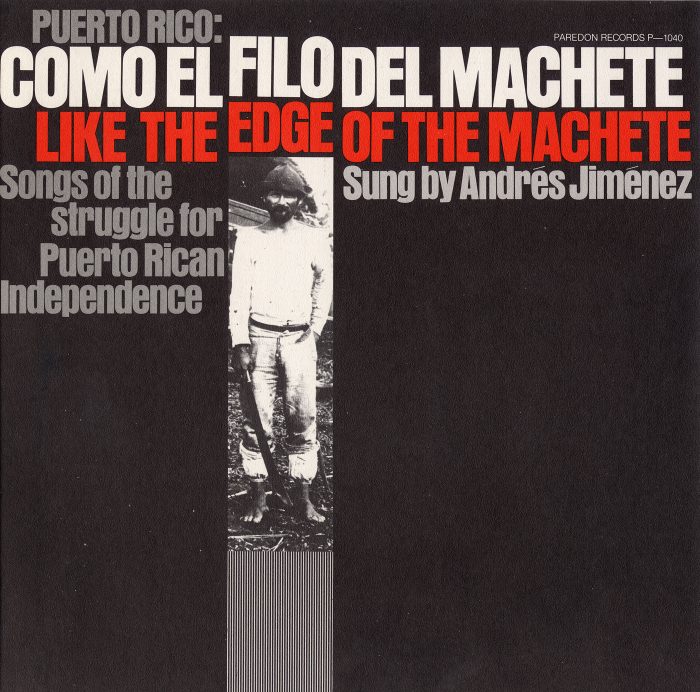 COMO EL FILETE DEL MACHETE reflects the struggle for Puerto Rican Independence in song. The original was recorded by Disco Libre in 1978, during a burst of cultural and political activity. The current version was released by Paredon Records in 2004 on Smithsonian Folkways Records.

Singer, songwriter, political activist, Andres Jimenez had this to say about the importance of the music: “I use traditional music forms because I believe that it is easier for new ideas of change to be accepted when they are presented in forms people know to be their own. It is also an answer to the deculturation process being carried out in Puerto Rico by U.S. imperialism. We must reject things alien to our country, which have been introduced by the colonial power in order to deform our image of ourselves. We must become more conscious of our national values and traditional forms, and with that consciousness begin to construct a Puerto Rican nation.”

The repertoire includes the call to arms, Despierta Boricua (Wake Up, Puerto Rican), written by Guarionex Hidalgo Africano and Matos Paoli and inspired by El Grito de Lares (The Cry of Lares), the first and only major revolt against Spanish rule in Puerto Rico. The revolt did not succeed but it demonstrated the power of the masses.

El Pobre Sigue Sufriendo (The Poor Keep on Suffering) confronts the glaring contradiction between the have’s and the have nots. The lyrics demand justice, the redistribution of wealth, sweeping reform, and an end to inequality.

Canto Rebelde (Rebel Song), was composed in the 1940s by the poet, A. Pacheco. It calls on political activists to be dedicated, disciplined, and united in their struggle against colonialism.

A Puerto Rico (To Puerto Rico), composed by Lola Rodriguez del Tio and Andres Jimenez, the lyrics speak to solidarity between Cuba and Puerto Rico. “Cuba offers you her love, without conditions or distrust, and in defense of your land, She makes your vengeance her own, encouraging the hope, that shines in your skies.”

Composed in the 1920s by A. Pacheco, La Miseria (Misery) addresses the crimes of inequality and the exploitation of the poor by the rich. The lyrics were written in the 1940s, which reminds us that these conditions have existed for years, as has the struggle to effect change.

Composed by Juan de Mata and Andres Jimenez, Antonia Martinez (Song for Antonia Martinez) pays tribute to the sixteen-year-old girl who was killed randomly by a National Guardsman at the University of Puerto Rico during a demonstration against the war in Vietnam and the drafting of young Puerto Rican men into the U.S. Armed Forces. It’s telling that Antonia’s murder went unnoticed, whereas the Kent State murders were brought to the attention of the world by a tremendous media barrage.

Lo De Patria O Muerte Empieza (Now My Country, Or Death Begins). The song was composed in 1972 during the massive worker’s strikes for better wages and working conditions. The lyrics point out that until U. S. Imperialism is ousted from Puerto Rico, Puerto Rican labor will never be used for the benefit of its own people.

Valle de Collores (Valley of Colors) is an example of a long history of songs and poems that express the patriotic sentiment of the Puerto Rican people in the face of colonialism. More specifically, the song describes the feeling of displaced youth who are forced to move to cities to seek work and find themselves alienated and working under deplorable conditions. Collores is the name of a small mountain village of Aibonito.

Asi Es Mi Gallo (Behold, My Fighting Cock). Composed by Edwin Reyes and Luis Llorens Torrens, the song uses the cock fight as a symbol of liberation in the final struggle between the Puerto Rican masses and U.S. imperialism. The final verse, “Long Live Free Puerto Rico!,” is a cry for freedom. 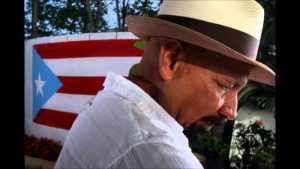 Andres Jimenez aka “El Jibaro” was born in 1947 in the central mountain range of Puerto Rico, known as the Cordillera Central. He is the fourth child in a family of fifteen, all of whom worked on their father’s farm. Early on, his mother took Andres to ceremonies where folk music was performed and celebrated.

Shortly after moving to New York Andres was drafted into the U.S. Army. He was stationed in Fort Hood, Texas, where the recruits were segregated and baffled by the fact they were forced to serve in the army of the “occupier.”

When Andres was discharged he returned to Puerto Rico. Shortly after that he attended the University of Puerto Rico in San Juan, where he encountered the antiwar movement and went on stage for the first time as part of the Grupo Taoné, which featured the legendary musicians Roy Brown, Antonio Cabán Vale aka “El Topo,” Noel Hernandez, Carlos Lozada and the duo Pepe y Flora. Andres continued to perform with Taoné for several years while developing a unique style that reaffirmed his commitment to Puerto Rico and its folkloric traditions. Moreover, he traveled to the United States and performed at Harvard, Yale, and Princeton and for Puerto Rican migrant communities in New York City, Chicago, Connecticut, Boston, and Los Angeles.

Steeped in the traditional music of the jibaro peasants and mountaineers, Andres made the decision to base his work on the form that eloquently expressed the religious and social life of his people: the Decima. Andres is one of the few people of his generation to take up this art from Spain and make it his own by filling it with contemporary relevance.  “My principal objective is to bring Puerto Rican music to the attention of the world,” explains Andres. “Because of the colonization, we have been isolated, and our traditional music and our traditional music has not been allowed to leave Puerto Rico. Instead, they have tried to make us feel that our traditions were inferior, unimportant, and without value. In many parts of the world, people don’t realize that Puerto Rico has a folkloric tradition, believing that we are totally assimilated into North American culture. My objective is to take our music to Latin America, Europe, and the U.S., so that people may see that we do have a culture, not only musically but in other artistic manifestations as well.”

Andres is a recipient of …

In 1999 Andres collaborated with the salsa singer Ismael Miranda on the album, Son de Vieques and produced the CD Raices Puertorriqueñas. Both works were used as rallying cries for the rights of the people in Vieques. Also, he is the producer of the Festival Jibaro, which presents some of the most significant artists on the island.

In recent years Andres has composed Trovas depicting sacred music themes based on the Decimas of the painter, poet, and essayist Luis German Cajigas, inspired by verses from the Biblical books of Luke, Matthew, and Mark. Also, he continues to record albums whose themes revolve around nationalism and Puerto Rican pride such as So Are We, Nacido En Boriken, and Dia de Gallo Pinto.

In a recent interview, Andres said “We are entering a different era and a changing universe. It seems that political discourse, like that of artists, has to change and evolve. We have to get away from the dogmas of the past and look at the world differently, see the capacity we have as a people, and insert ourselves into the universe within the circumstances that exist, and deal with the political reality that we face.” 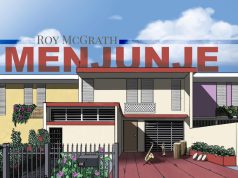