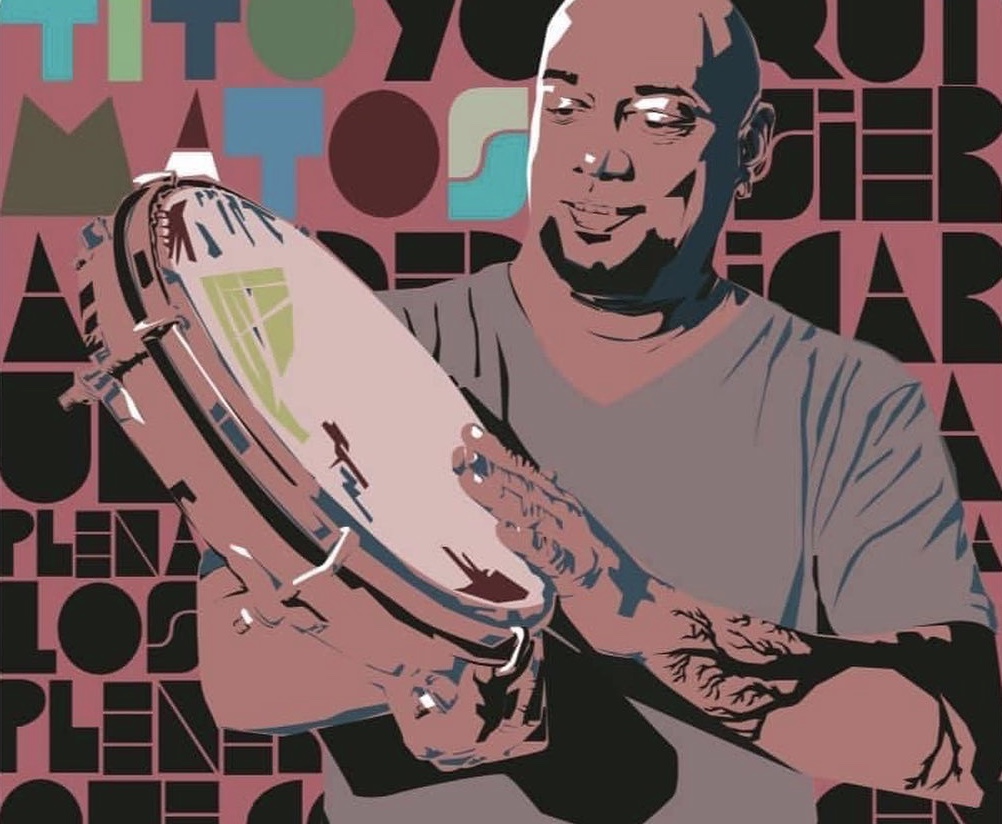 Puerto Rico is mourning the death of a cultural warrior and favorite son, HECTOR ‘TITO’ MATOS.

Matos grew up in a musical environment. His father was a “salsaholic and self-taught percussionist and trumpet player. “At home, there was always music, My parents had many parties,” said Matos in a recent interview. “The musical vein was born there, but one Three King’s Day, when I was between eight and nine years old, my maternal grandfather Don Felipe Otero Ruse gave me my first pandereta (hand drum), which changed my life. From then on and with the luck of being raised in Villa Palmeras, I began to insert myself the island’s bomba and plena scenes.”

He lived in New York for ten years and completed a degree in landscape architecture. In 1997 Matos, Ricardo Pons, and Alberto Torres founded Viento de Agua. According to Matos, “Our purpose is to disseminate our original and creative way of performing these ancestral rhythms not only to our Latino audience but to the rest of the world music audience. Viento de Agua is ready to be the flagship of Bomba & Plena around the world.”

Matos lived in New York for ten years, completed a degree in Landscape Architecture and co-founded the project, Viento de Agua with Ricardo Pons and Alberto Torres in 1996. The group was known for integrating instruments such as piano, bass, brass, and the drum set and taking a contemporary approach toward plena and bomba. In all, the group created five productions, which spanned contemporary and traditional folkloric music: De Puerto Rico Al Mundo, Opus IV, Fruta Moderna, Sonidos Primarios, and Viento de Agua Unplugged, Materia Prima.

Matos was a man of the people and the Santurce community was important to him. After the closure of the Pedro G. Goyco school in Santurce in 2015, the residents of the Machucal sector and Loiza Street, with Tito and his wife Mariana Reyes, spearheaded the effort to keep the building open until 2020. Shortly after that, they created the Taller Comunidad La Goyco Community Cultural Center, which included cultural, community, and health initiatives. Another project Matos spearheaded is La Junta, a cultural space that featured theater, cinema, workshops, and live music.

As recently as last Saturday (1/15), Matos and his group met at the Community Workshop – La Goyco, and together with the group Agua, Sol y Sereno recreated the Fiestas de la Calle San Sebastián.

Matos was also one of the creators of the Los Plenazos Callejeros movement, whose “mission” was to create spaces to perform. Over time, it became a monthly event and traveled throughout the island, making 71 stops and keeping the street corner tradition of the plena vibrant and alive.

During recent years, Tito appeared together with other pleneros and participated in, what he called a “Monday of Plena” at El Boricua, in Río Piedras, where he invited fellow pleneros to bring their instruments and join in.

Preliminary reports indicate Tito died of an apparent heart attack. He is survived by his wife, Mariana Reyes, and children, Hector, Seliana and Marcelo. He was 53 years old.

Thus far, there are no details on Matos’s funeral or burial but, rest assured, there will be a Plenazo to end all Plenazo’s as Puerto Rico celebrates his life and mourns his death. Hector “Tito” Matos was a staunch defender of the plena and bomba. Descansa en Paz!