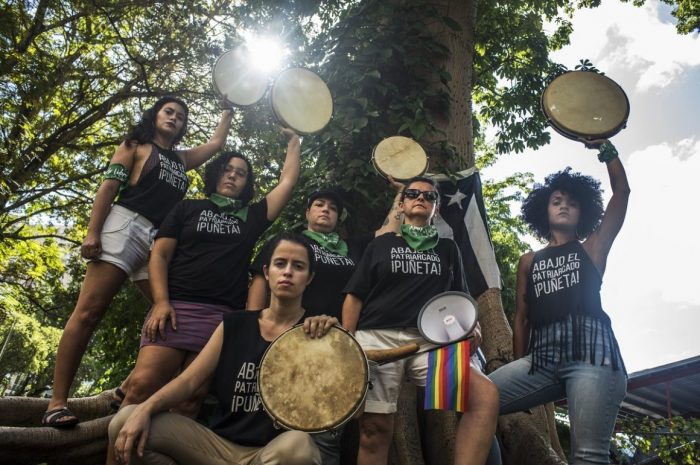 Puerto Rico is plagued by corruption, a debt crisis, failing infrastructures lingering effects, hurricanes, earthquakes, an ongoing pandemic and worst of all, the island’s colonial status deprives it of autonomy and self-determination.

Enter the all-female group PLENA COMBATIVA, and the anthem, EL TUMBE (The Tomb), whose lyrics capture the Puerto Rico’s plight and the people’s frustrations. The collective met at Elena workshops and demonstrations held by the feminist organization Colectiva Feminista en Construcción in 2017. Moreover, in July of that year, singer, songwriter Adriana Santoni Rodríguez posted a video on YouTube singing Plena Indignación, whose lyrics protest the fugitive dust and the negative impacts of coal ash generated by AES Puerto Rico, L.P., and police brutality in the municipality of Peñuelas. The post went viral and led to an invitation to perform at a rally against the Jones Act (1917). Santoni invited women from the workshop to join her, and Plena Combativa was conceived

Margarita was inspired to compose El Tumbe after reading an article by the journalist, Maria Mari Narváez, who condemned the Puerto Rican government for corruption after Hurricane María. Later, Adriana wrote the melody, and the collective collaborated on the arrangement. Essentially, the tune narrates robbery situation’s from the collective’s experiences and denounces the island’s plight.

El Tumbe begins at a measured pace and slowly gains intensity. At the 3:34 mark, Margarita cries out:

“El Tumbe affirms that we are fed up and set to fight and denounce and demand dignified lives for ourselves and our people,” says Angellie. “Playing it makes my skin crawl!” Laura adds, “Whenever we play El Tumbe, Margarita’s rant makes my hair stand up. Listening to it reminds me of why we got here.”

When El Tumbe was released on International Worker’s Day, the group created the hashtag, #VivoenelPaísdelTumbe (I live in the country of The Tomb), which went viral and became a rallying cry. Shortly after that, the group paid tribute to Ramón López’s book, Los Bembeteos de la Plena (Ediciones Huracan, 2008), by launching the single Bembetea (a reference to thick lips aka Bembas.) Written and set to music by Adriana, the song honors the life of Carola Clark, a black woman and daughter of the Barbadian couple, John Clark and Catherine George, who arrived in the Joya del Castillo neighborhood in Ponce at the beginning of the century. “Carola accompanied her parents in their musical tasks through the streets of Ponce, and became an excellent and famous pandereta (tambourine) player.” Also, the lyrics shout loud and clear, “Plena was never the exclusive territory of men. We own the tambourine we inherited from Carola Clark. The Plena and every space where we play, dance, honor, and sing belong to us. This is our bembeteo. In every opportunity of political intervention, we bet on the visibility of our bodies and gestating a more dignified country. Bembetea celebrates ancestral legacy, the history of Plena, joy, resistance, and camaraderie.”

Plena (the genre) is rooted in African songs and dances. It originated in Ponce around 1920, though its complex rhythms and soneos (calls and responses) go back decades. It is music for the marginalized, but throughout most of its history, the gatekeepers have traditionally are men who, with rare exceptions, envision women as accompanists, singers, and dancers. “According to the moral standards of the times, drumming was not ‘womanly,” says Nellie Lebrón Robles. “For many, many years, women did not play the drums.” Although women drummers and groups are more prominent today, men still dominate the genre. Nevertheless, women are creating pathways for the next generation of Pleneras and Bomberas.

Currently, Plena Combativa is collaborating with other artists, inspiring one another and giving unity and strength to their message. Also, they are conducting workshops for children and adults and encouraging them to pick up a pandereta and compose songs. Future plans include an island-wide tour, an album dedicated to the Senior National Women’s Basketball Team, and a video series that showcases the accomplishments of Puerto Rican women.