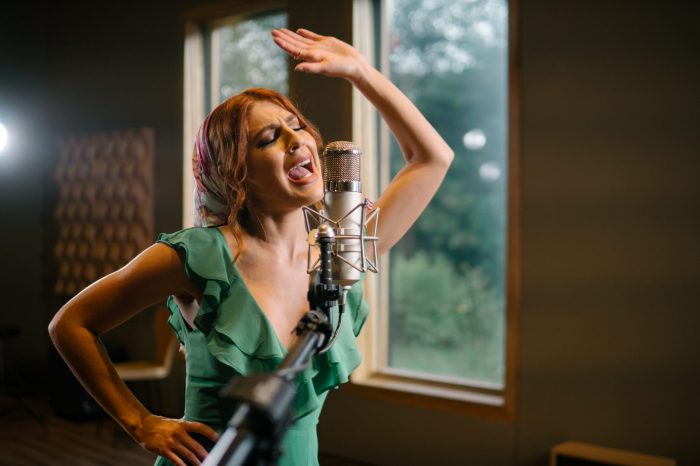 In the final frame of the racy video, Camina Como Chencha (Walk Like Chencha), singer, actress Karla Marie Rosado brandishes a ring as she points to the heavens. Unbeknown to most, the ring was specifically designed for Myrta Silva by the Mexican cartoonist Manuel Moran. When the ring passed from Silva’s family to Karla Marie, it was the equivalent of receiving her idol’s seal of approval. “For Silva’s family, it’s the passing of the baton, and I plan to do it with all the responsibility, respect, and honor that entails.”

As a child, Karla Marie was fascinated by the artists and music of Puerto Rico’s “Golden Age.” Today, much of the music she performs revolves around preserving Puerto Rican culture and identity and celebrating Puerto Rico’s artistic legacy.

In 2020, Karla Marie participated in Danny Rivera and Humberto Ramirez’s historical tribute to the extraordinary musician, bandleader, composer César Concepción (1909-1974) titled Mil Años de Plena. Concepción is remembered as a virtuoso trumpeter and for raising the Plena to the category of “Parlor Music.” Also, he was the founder and leader of one of the most sensational orchestras in the 20th century.

Following that, Karla Marie received a Paoli Award for the composition Mujer Latina, whose patriotic lyrics encourage unity, sisterhood, and the pride of being a Latina woman.

Karla Marie’s current project is a three-part video tribute titled Siempre Contigo Myrta Silva (Always With You Myrta Silva. According to the writer Guissel Gomez, “One can say Myrta Silva was one of the first women to express self-assertiveness in Latin America. She was a well-rounded musician with many skills, including songwriter, singer, and percussionist. Her skills were so influential they were pivotal in unearthing the talent of Celia Cruz. Silva was also a commentator and a producer. Overall, Silva was a true businesswoman in all senses; something that was seldom seen in her era.”

In a recent interview with The Vocero, Karla Marie talked about recording Camino Como Chencha, which was banned in Cuba, labeled as “obscene” and nearly led to Silva’s exile.  “This year marks the 60th anniversary of Camina Como Chencha’s release. At first, it didn’t occur to me to record the tune because of how strong the lyrics are and what the interpretation entails,” says Karla Marie. “Gilberto Santa Rosa told me: ‘You can’t honor Myrta if you don’t do Chencha.’ I thought about it, and I realized he was right. I dared to do it, and I loved it!”

Thus far, Karla Marie has completed two of three videos. Camina Como Chencha and Rafael Hernandez’s Esos No Son de Aqui (Cuchifritos). During a recent chat with Karla Marie, she told me she plans to release the videos on social media in September and perform Silva’s music live. Her long-term goal is to complete the album in its entirety.

“Silva represents the successful Puerto Rican woman who breaks barriers,” says Karla Marie. “She was a pioneer in a world dominated by men, and she lived and worked on her terms, and her example inspires me to keep going.”

Karlie Marie’s future plans include pursuing a career as an actress. For additional information and to keep up to date on her upcoming projects visit: