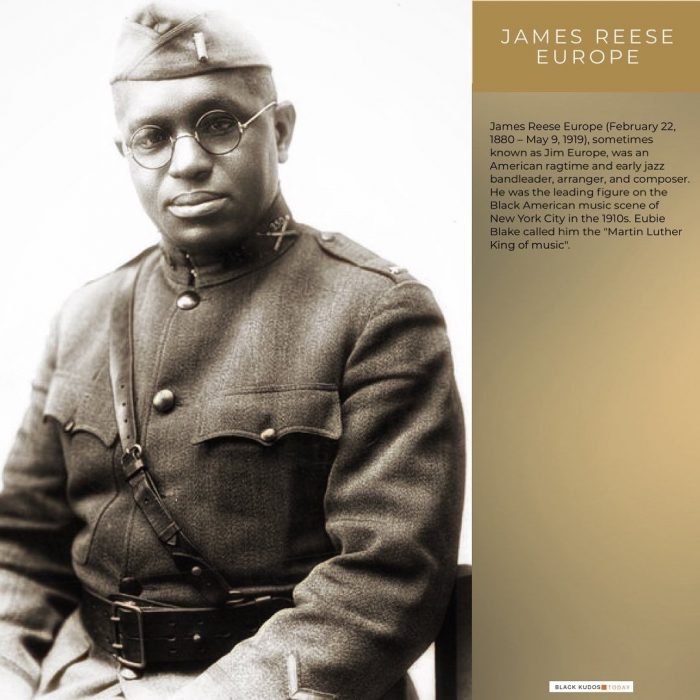 James Reese Europe is not a household name today, but in the early 1900s, he was one of New York’s most prominent African American bandleaders.

In 1910 he organized the Clef Club (later the Tempo Club), a gathering place, union, and booking agency for African-American artists, who were ignored by the American Federation of Musicians. The Club made history when it performed Negro Music at Carnegie Hall to benefit the Colored Music Settlement School.

Also, in 1913, Europe’s orchestra was the first to make phonograph records for the Victor Talking Machine Company, and his syncopated sound preceded the jazz age.

Lesser known but equally important, is Europe’s decision to participate in the Great War (WWI) and recruit Puerto Rican soldiers and musicians for the Fifteenth Regiment (Colored) of the New York National Guard (a.k.a. Harlem Hellfighters) military band. In my opinion, it qualifies Reese Europe as a racial trailblazer and an honorary Boricua Pioneer.

Soon after Europe enlisted, Commander, William Hayward approached him about organizing “the best military band in the world.” According to Hayward, “He (Reese Europe) explained to me that there were a lot of really good instrument musicians in Porto Rico. He had corresponded and found out about it.”

Because of Jim Crow Laws, which legalized segregation in the States, Reese Europe had difficulty recruiting African-American musicians with formal training. At the time, with rare exceptions, Black musicians received musical training through the army, orphanages, and other publicly supported bands and access to decent instruments and funding was limited.

Europe requested and received permission to expand the size of the band from 28 to 44 musicians. Also, in addition to forming a successful military band, he sought to gain support for the National Negro Orchestra, which he planned to lead after the war.

Also, the Jones -Shafroth Act – also known as the Jones Act of Puerto Rico, granted U.S. citizenship to anyone born on the island on or before April 25, 1898. As a result, Europe concluded in Puerto Rico he could obtain recruits and musicians who were eligible for the draft.

Reese Europe arrived in San Juan on May 2. 1917. During the voyage, he received word that the 15th Regiment had been ordered to Camp Peekskill for field exercises and rifle practice and he was ordered to return quickly. In total, Europe spent three days in San Juan. According to the biographer, Reid Badger, Reese Europe returned with 13 recruits, “including former members of Manuel Tizol’s municipal band, four performers with the Jolly Boys and several ‘scions of illustrious musical families.'”

Given the fact that Europe was not fluent in Spanish, nor familiar with the island or its musicians it’s logical to assume that he had assistance. Over the years historians and writers have speculated about the “Puerto Rican Connection,” but to date, there is no substantial proof.

Theory 1: According to Donald Thompson and Martha Moreno de Schwartz, “It is clear that the effective recruiting of musicians had already taken place in Puerto Rico, and in fact (Noble) Sissle speaks of Europe using a prepared list and having to rush back with men he had not had the time to pick. The pre-selection of candidates might have been carried out by Manuel Tizol, conductor of the San Juan Municipal Band, and an orchestra contractor already known in New York City.”

Theory 3: In 1917 agents for the Victor Talking Machine Company stopped in San Juan as part of a recording tour of South America and the Caribbean. Several numbers of Manuel Tizol’s band and an orchestra led by Rafael Hernández ended up on Victor’s acetates. Since Europe also recorded for Victor, it’s possible that he learned about Tizol, and Hernández through the company grapevine.

Theory 4: Another source claims that Europe’s Syncopated Society Orchestra, which accompanied the dance team of Irene and Vernon Castle, was comprised of “Black and Puerto Rican musicians.”

On the front lines, the New York Fifteenth was attached to the French Army and became the 369th Regiment band, which toured France and performed military music and standard band repertory for ceremonial duties, visiting dignitaries and concerts for the French and American troops. But what garnered the most praise was the band’s ability to improvise and swing.

According to Basilio Serrano, “Some music historians have written that the 369th Regiment band introduced jazz to France and the rest of Europe during World War I. However, others would posit that the syncopated music that the 369th introduced may better be described as a hybrid evolving from ragtime to early jazz. This is important to note because it implies that the Puerto Rican participation influenced jazz from its early period.”

In total, the regiment spent fifteen months at the front, distinguished themselves in battle, and received the Croix de Guerre, France’s highest honor. After his return home in February 1919, Europe stated, “I have come from France more firmly convinced than ever that Negros should write Negro music. We have our own racial feeling and if we try to copy whites we will make bad copies … We won France by playing music that was ours and not a pale imitation of others, and if we are to develop in America we must develop along our own lines.”

Shortly after the war, Europe’s plans to tour the nation with the National Negro Orchestra were cut short when he was murdered by a disgruntled band member (1919).

Fortunately, we have the Pathé recordings (1919), which document the music of the 369th Hellfighters Band and the liner notes, which clearly indicate that the Puerto Ricans participated in the sessions.

After Europe’s death, the Puerto Rican contingent disbursed. Some returned to the island, others performed with prominent jazz bands including the Fletcher Henderson Orchestra, Louis Armstrong, C. Luckyeth (Lucky) Roberts, Sidney Bechet, The Southern Syncopated Orchestra, and the Noble Sissle Orchestra among others.

Without question, the most famous Puerto Rican recruit is the multi-instrumentalist and prolific composer, Rafael Hernández. After the war, he joined stride pianist C. Luckeyeth Roberts’ Band and started a record company with his sister Victoria. Also, he formed the Trio Borinquen and participated in numerous recording sessions. During the 1930s he lived in Mexico and briefly visited and performed in Havana. Hernández is fondly remembered as “El Jibarito” and his compositions are revered throughout Latin America and played the world over.

Author Ned Sublette sums up the “bicultural sophistication” of Puerto Ricans: “As soon as Puerto Ricans were Americans, they were helping transform the music. From 1917 there is no African American music in New York in which Puerto Ricans don’t figure. They have been a natural part of the jazz in New York since before cats were taking improvised solos, and as the ‘Latin jazz’ hybrid developed, they provided critical links between the African American and Cuban styles because they were the ones who understood them both; and they made them their own – in their own way. The unique bicultural sophistication of the Puerto Rican is a broad topic – but it can’t be left unmentioned in talking about the development of the music in New York.”

With the exception of authors such as Ruth Glasser, Basilio Serrano, Donald Thompson, Martha Moreno de Schwartz, and a handful of others, the Puerto Rican contingent has not received the recognition it deserves. Nevertheless, James Reese Europe’s decision to recruit Puerto Rican musicians, unite “brothers of color” and spread the “jazz germ” throughout Europe qualifies him as an Honorary Boricua Pioneer.