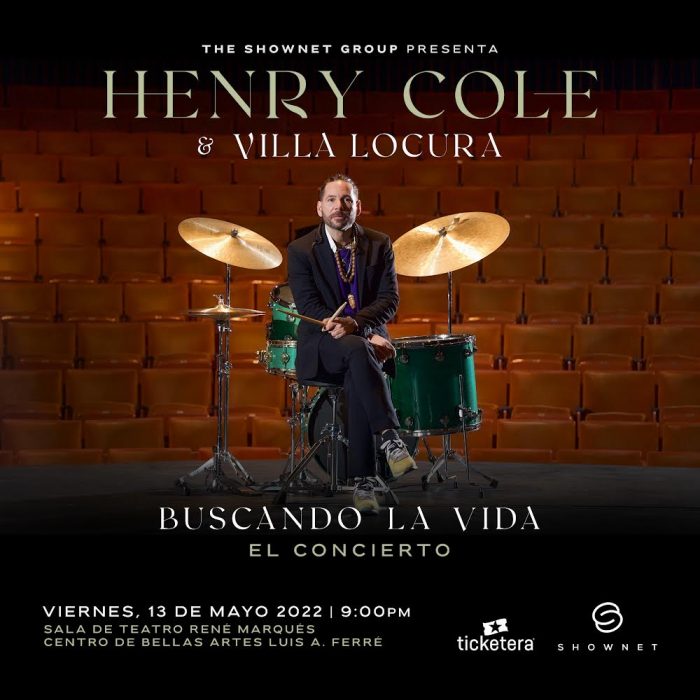 HENRY COLE & VILLA LOCURA invite listeners and dancers to experience their hypnotic new album, Buscando La Vida (Looking for Life) at the Centro de Bellas Artes Luis A. Ferre on May 13, 2022 at 9 PM (see link for tickets below).

The music, which writer Raul da Gama described as “explosive,” is a fusion of Afro-Puerto rhythms, Afrobeat, hip hop, jazz, and reggae that is best experienced in a live setting.

For this historic event, Cole will be accompanied by a squad of fourteen musicians and guests such as the Nigerian vocalist Duke Amayo, plenero Alex López “El Callejero,” and the Añasqueño MC Negro González, among others.

A native of Mayagüez, Puerto Rico, Cole began playing the piano at the age of four and fell in love with the drums at the age of nine. The musical romance led to the Mayagüez Free School of Music and the Puerto Rico Conservatory of Music. Initially inspired by Latin percussionists Giovanni Hidalgo and Anthony Carrillo, Cole discovered his passion for jazz and improvised music while attending Berklee College of Music in Boston. After returning to Puerto Rico, Cole cultivated a reputation in Old San Juan’s diverse music scene, working with poets, rappers, Bomba musicians, Pleneros, Rockeros, and Salseros.

His flexibility, grace, and sheer power behind the drums have proven indispensable to some of the world’s most acclaimed jazz groups, including the Grammy-nominated Miguel Zenón Quartet, Grammy Award-winning David Sánchez, Quincy Jones’s Global Gumbo, the jazz master Eric Reed and the pianist Chano Domínguez, a living legend of new flamenco.