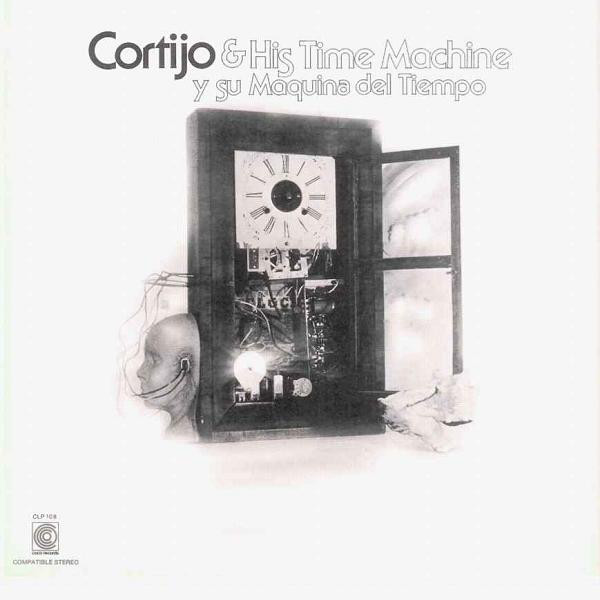 Today, Cortijo & His Time Machine y su Máquina del Tiempo is considered a classic and a collector’s item, but when the album dropped in 1974 it threw critics, listeners, and dancers for a loop.

In 1973, after the breakup of the group, Cortijo y su Bonche, Rafael Cortijo was between bands. By chance, he encountered the pianist, composer, arranger Pepe Castillo when they collaborated on a commercial for WKDM radio. According to Castillo, “I told him I have three new arrangements, but the music was International music, not Salsa, very Puerto Rican but radical.” Surprisingly, it piqued Cortijo’s interest.

Cortijo brought the concept to Harvey Averne. “The young guys (Pepe Castillo and Edgardo Miranda) wanted to express themselves out of the box. They wanted to do something in jazz and survive as a jazz orchestra, but it wasn’t going to happen. They needed someone like Cortijo to do it. Cortijo comes to me with an idea outside of the commercial realm. I asked him what it was and he said, ‘I could describe it, but I would be wasting your time. you have to hear it. It’s something different.’ Before that, it didn’t have the name, ‘Time Machine.’ I gave it the name. I knew Cortijo’s past music and to see it grow into this. He was the Time Machine! This was not typical Cortijo music. This was a one-time project where the old guy liked what the young guys were thinking and he contributed greatly. Most bandleaders could not have pulled this off, it needed someone with the genius of Cortijo.”

With respect to the recording’s name, a reliable source who wished to remain anonymous told me the following: “La Maquina del Tiempo preceded Irakere and many other avant-garde groups. This is why Pepe called it La Maquina del Tiempo. He visualized it would be understood after time passed.” Also, the source stated: “Pepe was the one who convinced Cortijo to do something avant-garde, choose the musicians, the order of the songs, and with the exception of about three songs, arranged and composed the album. A little known fact since the album (credits) neglect to give him his just reward.”

Under Cortijo’s leadership, the group rehearsed at a studio in Santurce, Puerto Rico for two months. The sessions attracted Johnny Pacheco, Charlie Palmieri, and Roberto Roena, who, after hearing the music prophetically commented, “Rafa, you’re screwed! This music is 30 years ahead of its time, no one will understand it.”

The group recorded the album in multiple sessions in Puerto Rico and New York. The repertoire consisted of Bomba, Plena, Guarachas, and Aguinaldos from the island’s Jibaro repertoire, infused with jazz improvisation, an electric piano and guitar, crisp, lively percussion, and Brazilian elements.

When Coco records released the album in 1974 the reviews ranged from “interesting” and “avant-garde” to the “most brilliant Latin jazz fusion in the salsa tradition.” Truth be told, the music didn’t fit into any conventional category, and the critics, listeners, and dancers didn’t know what to make of it.

When the ensemble made its New York debut at The Teatro Puerto Rico, the event was billed as “Juntos Otra Vez” (Together Again). The all-star lineup included a variety of Cortijo alumni: The Cortijo y Su Combo All-Stars, El Gran Combo, Ismael Rivera y sus Cachimbos, and Roberto Roena y Su Apollo Sound. Cortijo’s Maquina del Tiempo was the featured act. A few minutes into the set the dancers realized the tempos were too fast. “That’s not music,” they shouted, “give us Maquinolandera, Perico!” Then the shouts turned into “boos.” The group faired better at the Jefferson Theatre, where they were a hit with the progressive, Village and Soho crowds but later, Cortijo adjusted the repertoire to accommodate the dancers.

Edgardo Miranda is arguably one of the most important cuatro players in Puerto Rico and the U.S. In addition to being an exceptional improviser, arranger, and accompanist, there is speculation he may have been the first cuatro player to utilize the instrument in a big band setting. Also, Miranda was a member of Los Pleneros de la 21. Regrettably, he battled leukemia for several years and passed away at a young age. Also, Cortijo died of pancreatic cancer in 1982. Regrettably, neither of them lived to see Time Machine gain the notoriety and recognition it deserved.

Today, Time Machine is a classic but Harvey Averne admits, “This album is one of the most respected, heralded, and awarded albums I’ve ever done (produced). It was voted one of the ten best salsa albums of all time, although I don’t think it’s salsa, it’s pure Latin jazz. Either way, I’m glad I didn’t roll it back.”

There are also several rumors surrounding the recording: “Legend has it, the Puerto Rican singer Roy Brown went to Cuba and laid this ‘lost in the promo shuffle’ on Chucho Valdez. Shortly after that, Irakere was formed.” Over the years, I’ve heard several similar rumors with a different twist but neither theory has been proven.

”What I think I hear Rafael Cortijo saying, in his monumental LP “Cortijo & His Time Machine” (Coco CLP 108) would go something like this,” says the Professor Robert Farris Thompson, “My music is a time machine and I will bring the past and present to a simmering boil over the tumbaos [bass riffing patterns] and guajeos [treble riffing patterns] of Afro-Cuban music. It will be Puerto Rico within Cuba within Nueva York within the world. We are on the move. You cannot stop us, let alone dictate academic boundaries.”