Frances Gotay was born in San Juan, Puerto Rico in 1865 (the name, “Gotay” is of Australian origin). Very little is known about her family and formative years but given the fact she left Puerto Rico at 17, for New Orleans, and joined the Colored Sisters of the Holy Family in New Orleans in 1883 we can surmise the Gotay’s were probably Christian. Three years later she took her vows and adopted the name, Sister Marie Seraphine. 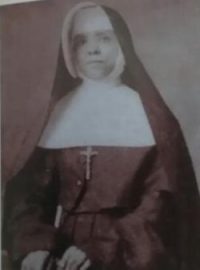 Fortunately for Sister Seraphine, her superiors recognized her talent and enrolled her in a Catholic music school that ordinarily did not accept people of color. By the time she graduated, Sister Seraphine excelled on the piano and organ and mastered the strings, reeds, brass, and percussion.

After graduation, Sister Seraphine directed the orchestra at St. Mary’s Academy. Also, she taught music to the orphans at the Thomy Lafon Home for Boys and the St. John Berchmans’ Home for Girls, both of which were under the care of the Sisters of the Holy Family. Additionally, Sister Seraphine established a boy’s band, played the organ, sang with the St. Louis Cathedral Choir, and taught French.

Several years before her death, Sister Seraphine was in poor health. In spite of that, she refused to give up teaching or visiting the boy’s home. On September 10, 1932, Sister Seraphine gave music lessons, rehearsed the boy’s band and choir, and retired for the evening. The next day, in the middle of the night, she aroused a fellow nun and complained she was ill and needed medical attention. While waiting for help, the nuns applied home remedies, but because the Home was a great distance from the city limits, Sister Seraphine died before help could arrive.

On Monday, September 12, 1932, a High Requiem Mass was sung for Sister Seraphine in the motherhouse chapel. Afterward, accompanied by a large group of orphans from the Lafon Boy’s Home, girls from St. John Berchmans, and former students from St. Mary’s Academy, she was buried in St. Louis Cemetery No. 2.

Regrettably, when the convent relocated from the French Quarter to Chef Menteur Highway in New Orleans, East in the 60s, with the exception of one composition titled, “La Puertorriqueña Reverie,” all of Sister Seraphine’s compositions and personal belongings were lost.

According to the historian and musician Noel Allende Goitia, Sister Seraphine was part of a group of pianists who established a jazz-oriented style. Also, she holds the distinction of being the only Black female composer known to be active in New Orleans at the turn of the 20th Century.

Regrettably, we know very little about Frances Gotay, who will forever be known as “The Convent Maestro.”

A Brief History of The Sisters of Holy Family

Twenty years before the Civil War of the United States, and before it was legal for such a Congregation to exist, the Sisters of the Holy Family were founded in New Orleans, Louisiana by Henriette Delille, a free woman of color. Co-foundresses of this religious community of African-American women were Juliette Gaudin and Josephine Charles.

Destined by the mores of the time to live a life of ease in the tradition of their female ancestors, Henriette, Juliette, and Josephine dared to break away from that pattern of life and chose to follow God’s call. Also, they taught the slaves, cared for the elderly, and shared what they had with the poor and the needy.

For over 170 years, the Sisters of the Holy Family, in the spirit of their foundresses and early predecessors, have continued to serve the youth, the elderly, and the needy members of society. The Sisters have not only served the New Orleans community but also in Louisiana; Texas, California, Washington, D.C., Oklahoma, Alabama, Florida, Belize, Panama Central America; and Benin City, Nigeria, Africa.

During the history of the community, numerous noteworthy events have been documented. On November 21, 1842, the community was established. In 1843, catechism classes were conducted for adults and children. In 1847, a group of free men and free women of color formed the Society of the Holy Family to give the Sisters moral and financial support. On October 15, 1852, Henriette, Juliette, and Josephine pronounced their first vows in St. Augustine Church. When children were left homeless by the pestilence in 1853, the Sisters cared for the orphans. Thus, in 1892, the St. John Berchmans’ Orphanage was dedicated. The Sisters cared for the sick during the yellow fever epidemic in New Orleans in 1897. The Sisters arrived in Stan Creek, British Honduras on Palm Sunday in 1898.
For $10 an acre, Mother Austin Jones purchased 123 acres of land in the Gentilly area. This 1906 purchase formed the cornerstone for the ministries at St. Mary’s Academy, St. Paul the Apostle Church and School, the House of the Holy Family, Delille Inn, Lafon Day Care Center, Lafon Nursing Facility of the Holy Family, and the present Motherhouse. In 1988 Henriette Delille’s Cause for canonization was opened.

The Sisters have spent over 170 years of loving, caring, and sharing with and for the people of God, for their own sanctification, for spreading the word of God and improving the lives of the people they serve.