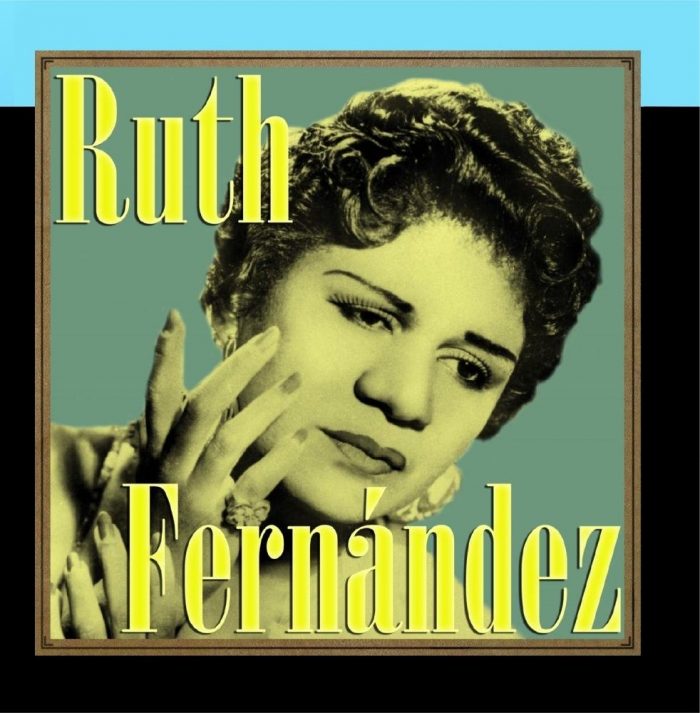 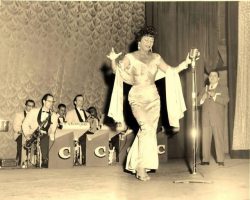 RUTH NOEMI FERNÁNDEZ CORTADA, a.k.a. Ruth Fernández was born in 1919 in the Belgica barrio in Ponce to Santiago Fernandez and Rosa Maria Cortada. She and four siblings were raised by their grandmother.

Fernández received her primary and secondary education in her hometown. There, she learned the piano and was active in her school and community. At fourteen, she turned professional. Fernandez also appeared on several radio stations and caught the attention of the local bandleader, Mingo, who invited her to join his band, the Whoopee Kids.

In 1941, Fernández signed with Columbia Records and recorded the song, Cuando Vuelva (When You Return, composed by Myrta Silva). She made her New York debut at the Latin Theater, where the MC introduced her as “El Alma de Puerto Rico Hecha Cancion” (“The Soul of Puerto Rico Turned Song”) a moniker that stuck.

In 1943, she returned to Puerto Rico intending to study social work. Instead, she reunited with Mingo’s band and toured the Caribbean and Central and South America.

Fernández was one of the first successful Afro-Puerto Rican female singers. She was also a trailblazer who broke color barriers and discredited stereotypes—case in point. In 1945, when the group performed a benefit concert at the Condado Vanderbilt Hotel in San Juan, they were informed they must enter and exit through the kitchen out of concern for the American patrons. Although laws did not support racial segregation in public spaces, separation of the races was sustained by custom, tradition, prejudice, and money. Fernández pulled up to the hotel in a luxurious Packard. Decked out in a stunning white dress she regally entered the hotel’s main door and dared anyone to stop her. From that day forward, she referred to her blackness with pride and joked she was “Insoportablemente Ponceña” (unbearably Ponceña).

During World War 2 and the Korean War, Fernández entertained Latino soldiers. In 1954, she returned to Puerto Rico and launched a career as a soloist.

Fernández was a trailblazer in more ways than one. In 1954, she participated in Puerto Rico’s first televised music show titled, El Libby. She also was the first Puerto Rican woman to sing with a Puerto Rican band and a North American group and to perform popular music at the Metropolitan Opera House in New York City.

She had a long-standing relationship with the bandleader, composer Lito Peña, who composed many of her most famous songs. She also recorded with the Orquesta Panamericana, the Machito Orchestra, and Los Hispanos as a backup singer.

Her performances with the CBS Radio Network were heard from coast to coast. Also, Fernández performed at Carnegie Hall in New York (1960) and appeared in two Spanish-language films and the Banco Popular documentary film, titled Raices.

Throughout her life, Fernández received various honors. Among them, the 500th Centennial Commission named her as one of three Latin artists who contributed to uniting Latin America. Also, in 2000 she was named the Singer of the Century.

In 1972, Fernandez was elected to Puerto Rico’s Senate, representing the district of Ponce as a member of the Partido Popular Democratico de Puerto Rico. As a legislator, Fernández sought reforms and better working conditions for artists and Puerto Ricans living in the United States (The Ruth Fernandez Apartments in the Bronx, are named after her). After the senatorial term, she served as a cultural adviser to Hernández Colón. In 1990, she was selected by Imagen (Image) magazine as one of the ten most powerful women in Puerto Rico.

Briefly, Fernández led Casa del Artista Puertorriqueño (House of the Puerto Rican Artist), which advocated for the development of emerging Puerto Rican artists. Her controversial tenure, spanning over a decade, resulted in the granting of $500,000 and the purchase of the Teatro Coribantes, a theater near San Juan’s Hato Rey financial district.

Fernández married and divorced twice. She had no children however she was affectionately known to her nephews and nieces as “Titi Ruth” (Auntie Ruth). Her nephew is the flutist, Nestor Torres.

Fernández retired in 2000. She died on January 9, 2012. She suffered from Alzheimer’s disease, however, the cause of death was septic shock and pneumonia. At the time of her death, Puerto Rico’s government declared three days of national mourning. She is buried in Ponce’s Civil Cemetery.

Fernández is the recipient of the medal of Vasco Nunez de Balboa (Panama); The Order of Francisco de Miranda (Venezuela), an Honorary Doctorate from the World University, and the declaration of Ruth Fernandez Day in Washington, D.C., New York City, Los Angeles, and Puerto Rico. In 1963, Pablo Casals dedicated the song, Ven a Mi (Come to Me) to Fernandez.

Fernández’s signature song was Gracias Mundo (Thank You, World), whose message is similar to Louis Armstrong’s What a Wonderful World. In this writer’s view, Ruth Fernandez was the equivalent of Rosa Parks. Also, she exemplifies a generation of Puerto Rican women singers, instrumentalists, and actresses whose impact has yet to be examined or written about with the accuracy and respect they deserve.