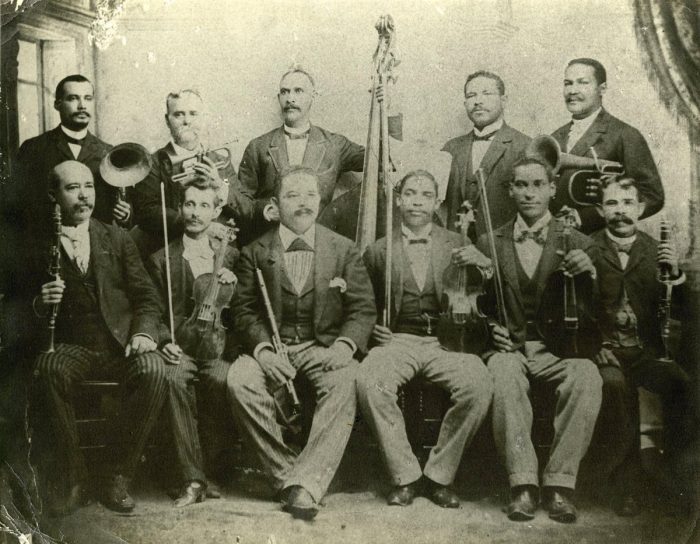 Juan Morel Campos is one of the most significant exponents of Puerto Rican Danza in the island’s history. His successor, Domingo Cruz “Cocolía” is lesser-known but equally important.

Juan Morel Campos was born in Ponce on May 16, 1857 to Manuel Araujo from the Dominican Republic and Juana de Dios Campos Collazo, from Venezuela.

He began his studies at eight, under the watchful eye of Professor Antonio Egipciaco, and was the protegé of “The Father of the Danza,” Manuel Gregorio Tavarez. Morel Campos played the cello, flute, bombardino (bass trombone), the euphonium (a 3 or 4 valve tenor-voice brass instrument resembling a tuba), and the organ.

In 1877 Morel Campos was the principal baritone player in the San Juan Battalion in Madrid, Spain. When he returned to Ponce in 1882, he organized the Fireman’s Band, which he conducted until his death. Also, he was a conductor of dance music and the founder of the municipal orchestra, La Lira Ponceña.

In addition, he arranged operas and zarzuelas and toured South America as the director and conductor of the Compañía de Zarzuela Española Bernard y Arabella. In total, he composed approximately 500 works. Of those, about 300 were Danzas. Some of his best-known compositions include Felices Días (Happy Days), No Me Toques (Do Not Touch Me), Idilio (Idyll), and Maldito Amor (Damned Love).

Many of the themes revolve around unrequited love. In the play Torbellino: A Story of Unrequited Love, written and directed by Adriana Pantoja, the melodramatic montage flows between stories and legends about Juan Morel Campos and his alleged forbidden love. The script recreates how the teacher Juan Morel met his disciple Mercedes Arias, how he falls madly in love with her, and how influential he was in her compositions. Similarly, the actors dramatize how Mercedes’ father opposes their union, how the couple conspires to meet secretly, and how love prevails. According to his granddaughter, Morel Campos’s sadness stemmed from his inability to study abroad. “Although he was from a very poor family,” she emphasizes, “he ended up being more renowned than many who studied abroad.”

It’s worth noting Campos made history when he passed the baton to Ana (Anita) Otero, who holds the distinction of being the first woman to direct an orchestra in Puerto Rico. According to her grandnephew Robur Otero, “Juan Morel Campos gave her the baton in Ponce and Julio Andino handed her the baton in San Juan. She also conducted insular bands in San Germán and Mayagüez.”

On April 26, 1896, while conducting a concert in Ponce, Juan Morel Campos suffered a massive stroke. He died on May 12, 1896, just short of his 39th birthday. He was survived by his wife, Secundina Beltrán Collazo and five children, Olimpia, Eugenia, Belén, Plácido, and Manuel.

Although his life and career ended abruptly, his legacy survives through his extensive body of work. In large part, due to the fact, Morel Campos transcribed many of his compositions and made them available to the public.

Today, various institutions and schools bear his name. Also, his statue holds a place of honor in Ponce’s Plaza Las Delicias. In 2001, Morel Campos was inducted into the International Latin Music Hall of Fame. Also, in 1984 the Puerto Rican Government declared May 16, “Juan Morel Campos Day.”

Domingo Cruz “Cocolía” was an outstanding multi-instrumentalist, arranger, composer, educator, and director. Though he lacked formal training, Cruz’s enthusiasm, positive attitude, and work ethic made it possible for him to obtain a wealth of skills and occupy a valuable place among Puerto Rico’s most illustrious musicians.

Cruz composed several works that are preserved in the General Archive of Puerto Rico, including the mazurka Lulú, which Ernesto Alonso published in Unpublished Scores of Puerto Rican Composers (Editorial ICP, 2015). Also, the Danza, Ritita, dedicated to the pianist from Ponce Sisila Arce, and the waltz Mujeres de fuego.

Cruz was born in Ponce on July 3, 1864. He stood out as an excellent bombardino player in Juan Morel Campos’ La Lira Ponceña Orchestra and the Ponce Firefighters Band. His prowess on the instrument earned him the moniker, “King of the Euphonium.”

As Fernando Callejo points out in his work Music and Puerto Rican Musicians (1915), Morel Campos composed difficult passages, as challenges for Cruz: “Another of his misdeeds as an artist was to compose accompaniments bristling with difficulties, and in the higher register of the euphonium to put Domingo Cruz, ‘Cocolía’ in trouble, but he always came out victorious.” Cruz was also the cellist for the Morel Campos Concert Society and the Quartet Society (1915).

When Morel Campos died in May 1896, Cruz succeeded him as a music teacher and director of the Ponce Firefighters Band (which later became the Ponce Municipal Band), which he led from 1896 to 1916.

Cruz was Julio Alvarado’s teacher, whom he employed as a flutist in the Firefighters Band, as well as Augusto Coén and Lolita Tizol, whom he trained as a cellist. Lolita was the daughter of Cosme Tizol, who was a member of the Lira Ponceña de Morel. She was also a member of The Ponce Symphony Orchestra, which Domingo Cruz conducted on a visit to Puerto Rico.

According to the publication, El Adoquin Times, “On May 23, 1906, Cruz and his orchestra were invited to the inauguration of a new building in Bayamón by the Portorrican American Tobacco, Co., and in 1910 the orchestra performed at a dance at Francisco Ledue’s residence in Humacao. They also played in Aibonito, San Juan, Aguadilla, Añasco, Fajardo, Arecibo, Yauco, Bayamón, San Sebastián, Lares, Mayagüez, San Germán, Humacao, Caguas, Carolina, among others.” Cocolía also directed La Estrella Opera Company and performed the operas: Othello, Hernani, and El Trovador.

Cruz was a practitioner of Espiritismo (the popular belief that good and evil spirits can affect health, luck, and other aspects of human life). He and other musicians founded the Sociedad Espiritista Círculo Lumen, Inc. in Ponce and performed at spiritual meetings.

During his long and storied career, Cruz earned the esteem and respect of Puerto Rican society and unprecedented popularity. According to various sources, “he was a loving, self-sacrificing son, a good husband, an excellent father, and an exemplary citizen. Endowed with character, modesty, and tact, he was popular with his fellow musicians and all the island’s social circles.”

For many years, “Cocolía’s” statue stood in front of the Instituto de Música Morel Campos, which was previously occupied by the downtown Ponce fire station. In 2012 it was moved to its current location at Plaza Las Delicias, not far from his mentor, colleague and friend Juan Morel Campos.