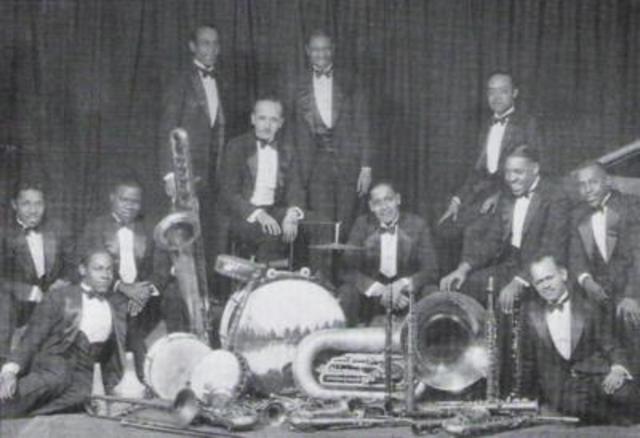 The bassist, tubist, RAFAEL ESCUDERO was one of the first Boricuas to receive recognition for his contribution to early jazz. He was also a crucial link between jazz bands and orchestras in Washington, DC, New York, and Puerto Rico.

At twenty-one, he boarded the steamer “Caracas” in San Juan bound for New York on a scholarship from the New Amerstand Music Association (NAMA) and arrived on June 13, 1912 (or 1914). Later, he became associated with the Clef Club, an important organization for African Americans and Latinos that functioned as a union and venue.

Over the years he performed with the NAMA band, featuring Ethel Waters, the Marie Lucas band at the Howard Theater in Washington, DC, and the Wilber C. Sweatman band, where he played the tuba and string double-bass. In the book, Early Jazz, Its Roots and Musical Development (Oxford University Press, 1968), author Gunther Schuller describes Escudero as the one who put the “swing” in the popular tune, “Put it There.” Also, Thomas J. Hennessy wrote, Escudero “was one of the Caribbean musicians prized in New York for reading ability, technique and legitimate tone.”

Escudero was also a member of the Fletcher Henderson Orchestra, widely considered one of the most renowned African-American bands of the Harlem Renaissance. Henderson recruited Escudero when he saw him perform with Wilbur C. Sweatman’s band at the Howard Theater.

Eventually, Escudero left Henderson’s band to join the Detroit-based McKinney’s Cotton Pickers, led by Don Redman who, off and on, included jazz greats Benny Carter and Rex Stewart among others. Also, the band participated in all-star sessions with Jabbo Smith, Sidney de Paris, Coleman Hawkins, and Fats Waller among others.

Escudero also recorded with the Cotton Pickers under the name, The Chocolate Dandies featuring Lucille Hegamin, Bessie Smith, and Ethel Waters. In addition, he was a member of Louis Armstrong’s (early) band and toured with W.C. Handy.

In another instance, Schuller described Escudero as a “stalwart of the tuba.” Also, according to Eugene Chadbourne (All Music Guide), Escudero was “a valuable rhythm section member in some of the most prominent of the larger classic jazz ensembles.”

Despite his stellar reputation as a tubist, Escudero switched to the string bass. No one knows why but there is speculation it was the trend.

In 1942, at the age of fifty-one, Escudero registered for the military however, he was not drafted. Instead, he was employed by the Work Projects Administration (WPA), which employed musicians in a variety of capacities.

According to the late orchestra leader and trumpeter, Miguelito Miranda, who appeared at a Record Collector’s conference in 2000 or 2001, Escudero was an active musician in Puerto Rico. Also, he was somewhat of a running joke amongst musicians on the island and seen as a “crazy old man” who talked about his exploits to anyone who would listen. Apparently, his colleagues couldn’t conceive or refused to believe that Escudero actually performed with jazz greats Fletcher Henderson, Duke Ellington, Louis Armstrong, and others.

Escudero died tragically on April 10, 1970, at seventy-nine, the victim of a fire in the Roma Hotel in Old San Juan. He was musically active up until his death.