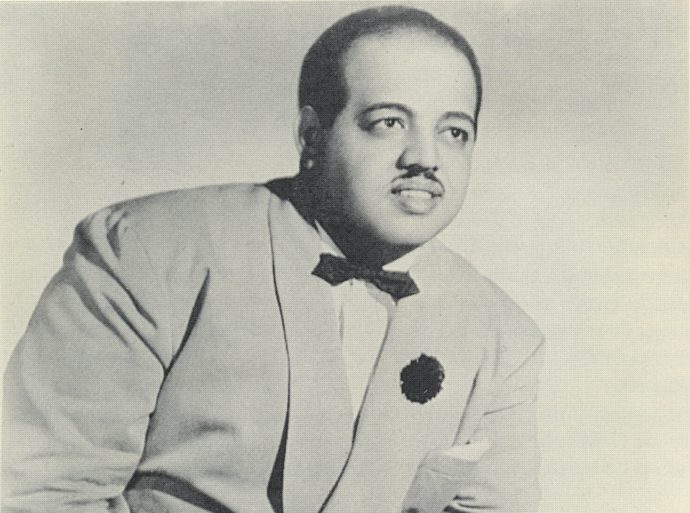 Multi-instrumentalist composer Norberto Osvaldo Morales (Noro) was born in the Puerto de Tierra section of San Juan, Puerto Rico on January 4th, 1911. Though he was an exceptional pianist and bandleader, he was initially trained as a trombonist.

According to musicologist Max Salazar: “Noro was a Puerto Rican hero in the 1940s, partly because some of the titles of the tunes he wrote bore the names of Puerto Rican cities and also because of Rafael Hernandez’s lyrics, which celebrated the island’s culture. For the first half of the 1940s, Morales and Xavier Cugat’s groups were the most popular bands around; after 1945, Morales’s main rival as a bandleader was Machito. During this period, Noro’s band was paid the highest compliment an orchestra can get. Wherever Morales and his group appeared, musicians from other bands would come to watch the performance including Tito Puente, Tito Rodriguez, Charlie Palmieri, Hector Rivera, Lou Perez, Pete Terrace, and Frankie Colon.”

Noro was raised in a musical environment. His father, Louis was a violinist; his brother Ismael played the flute and saxophone; Jose (Pepito) was a saxophonist, brother Luis played the violin, and his sister, Alicia played the piano. All were all outstanding musicians.

In 1924, the Morales family moved to Caracas, Venezuela, and Morales’s father became the musical director for (then) President Juan Gomez. Shortly after that, Morales senior died, and Noro took over.

Six years later the orchestra broke up, and the family returned to Puerto Rico, where Noro freelanced as a pianist with Rafael Sanchez y Su Sinfonica, the Midnight Serenaders, Carmelo Diaz, and Rafael Muñoz before moving to New York City in 1935.

His first stateside job was with the Alberto Socarras orchestra. Later, the Morales Brothers Puerto Rican Orchestra emerged in 1938 with drummer Humberto, flutist Etsy, and Pepito. The group made six recordings for Columbia Records.

The tune, Serenata Ritmica, recorded for Decca Records in 1942 catapulted Noro to fame in the mambo and rumba music world. Also, it led to performances in major nightclubs in Manhattan such as The Stork Club, El Morocco, La Conga, The China Doll, the Palladium, and the Copacabana among others.

An incident at the legendary Stork Club between Noro and the popular radio personality, news anchor, and journalist Walter Winchell also led to a boost in his popularity. According to Salazar: “Winchell spoke to Noro in English. With a bewildered look Noro replied, ‘Scoose me, my English is not so nice looking.’ Winchell mentioned the incident in his column the next day.” To mark the occasion Morales composed the tune, Walter Winchell Rumba.

Morales was among the earliest (along with Ney Rivera, Claudio Ferrer, Panchito Riset, the first being Rafael Hernandez, thanks to his sister Victoria) to cut out the middle man and record, produce and release commercial recordings on his label, Rivoli Records. Also, Noro formed the Latino Music Society (LAMS) and demanded the end of “Relief” status given to Latin orchestras (“relief status” meant lesser pay than top-billed orchestras) and garnered a victory in labor practices for Latino musicians. The organization was short-lived but during its existence, it succeeded in getting top names such as Noro, Jose Curbelo, Pupi Campo, and others to have the stigma removed and garnered compensation commensurate with the top-billed orchestras.

Also, he opened a record store on 14th Street. At the Grand Opening, Noro and his orchestra performed in a window display to attract consumers. Both the record label and the record store were short-lived.

He was equally famous in Puerto Rico. Noro performed for the inauguration of the island’s first elected Governor, Luis Muñoz Marin, which led to a recording contract with MGM Records. According to Basilio Serrano, “On the first MGM LP, Morales recorded (the tune) Rum & Soda, which he dedicated to the Governor and a campaign to popularize Puerto Rico’s rums.”

During the 50s RCA A&R representative convinced Noro to record American pop standards, which lacked Noro’s trademark sound and swing and led to a decline in his popularity. Also, after over 25 years in New York, he became homesick for Puerto Rico. According to the author, historian Joe Conzo: “In the late 1950s, the music business in the United States was on a downward turn. The big bands for the swing era were replaced by small conjuntos, ensembles, and venues such as the Palladium Ballroom were no longer profitable. Noro suffered from diabetes and was beginning to lose his eyesight, which contributed to his decision to return home.” His sister Alicia, negotiated a contract for him to perform at the prestigious La Concha Hotel in San Juan for six months. Instead, he performed there for four years.

According to Frank Figueroa, “Noro, the disciplinarian, applied his rules equally to everyone in the band, including his brothers. While playing at La Concha in Puerto Rico, there was some dissension among the musicians because the band had a female drummer. Ana Carrero, the musician in question, was a competent drummer, she read music well and could play all the shows without difficulty. She was a woman nevertheless, and the male-dominated Latin bands had never included a female drummer. One of the most outspoken of Ana’s critics was Pepito Morales. One evening, after Pepito had more than his share of drinks, he couldn’t control his emotions and started yelling obscenities in Spanish at Ana on the bandstand while all the microphones were open. Those present heard it all. Fortunately, it was the last number of the set and the musicians left the stand. Noro took his “little brother” downstairs and gave him a tongue-lashing he would remember for the rest of his life and fired him on the spot.”

Morales was  also known as the “Latin Duke Ellington,” and the “Dean of Latin Jazz.” Basilio Serrano describes Noro’s sound as “bright and syncopated” and “jazz with a Latin ambiance.” This much is certain; Noro was a masterful and innovative pianist whose sound captured Puerto Rico’s flavor with New York City sensibilities. Also, he was a popular figure in the New York music scene for roughly twenty years.

Noro’s influence extended to Machito, Tito Rodriguez Tito Puente, and Charlie Palmieri, and to a lesser degree, Eddie Palmieri among others — many of who went through his band and performed with many significant artists including Pellin Rodriguez, Vicentico Valdes, Dioris Valladares, Vitin Aviles, Ray Romero, Manny Oquendo, Willie Rodriguez, Willie Rosario, and Ray Santos among others.

Noro Morales died in January 1964 at the San Juan Jorge Hospital in Puerto Rico. The official cause of death was uremia (kidney failure).

Noro married and divorced three times. According to Salazar, he made bootleg recordings using a pseudonym to pay alimony.