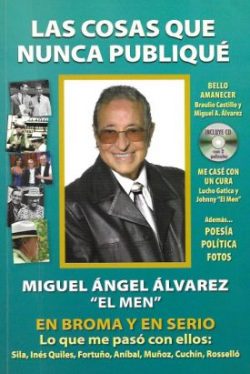 He was born in San Juan Puerto Rico and raised in the municipality of Bayamon, where he received his primary and secondary education.

Álvarez started as a radio show host for WENA. On October 3, 1950, he was among a group of reporters who covered the historic gunfight at Salon Boricua between the Nationalist and barber Vidal Santiago Diaz and forty police and National Guardsman. For three hours Diaz held off the National Guardsmen and Insular Policemen, who surrounded the barbershop and attacked with revolvers, rifles, carbines, and a machine gun. The event made history because it was the first event of its kind to be transmitted over the airwaves in real-time. In the end, Díaz perished but he became the second-most famous Nationalist in Puerto Rican history, after Pedro Albizu Campos.

Álvarez stood in for the actor, Jacobo Morales in the theater production of El Cielo Se Rinde al Amanecer (The Sky Surrenders at Dawn). Also, he appeared in the play Widows Walk, which was presented at the University of Puerto Rico Theater.

As his popularity grew, Álvarez appeared in productions throughout Spain, Mexico, Venezuela, Colombia, the Dominican Republic, and the U.S.

In 1965, he played the leading role in the Mexican film, El Señor Doctor with Cantinflas and Marta Romero. Afterward, he returned to Puerto Rico and participated in a comedy titled Johnny “El Men” (Johnny the Man), whose theme revolves around the struggles of a Puerto Rican living in New York. The nickname, “El Men,” stuck with Álvarez for the rest of his life.

During the 70s he participated in Manuel Méndez Ballester’s Los Cocorocos and in the 80s he starred in a TV comedy series titled Barrio 4 Calles.

In1988 Álvarez produced his own show for Channel 13 and at the end of the decade, he worked in productions such as El Kiosko Budweiser.

Álvarez cites his conversion to the gospel of Jesus Christ as one of the most significant moments in his life. In the poem, Mi Dos Amores he writes:

Today I meet you
And to both of you, I give myself without hesitation
I love you both …
With the heart …
They are my Puerto Rico
And the Lord… my God.

Many of the poems are religious, others are patriotic and, or critical of the colonization of Puerto Rico and its colonial status. Álvarez also advocates for political freedom and the rights of the working class.

On June 6, 2011, Álvarez was admitted to the Hospital Metropolitano in the municipality of Guaynabo, where he died from respiratory failure. Alvarez was buried beside the grave of his friend, painter Rafael Tufiño, in the cemetery Santa Maria Magdalena de Pazzis in Old San Juan.

On a personal note, I vividly recall my mother taking me to see Johnny “El Men” perform at the Teatro Puerto Rico in the South Bronx. During the 50s and 60s, the theater presented a vaudeville-style package of Spanish-language events and attracted entertainers from all over Latin America. After the performance, we went backstage to meet my famous second cousin. At the time of his death, I was in the process of reconnecting with Álvarez and members of my extended family.