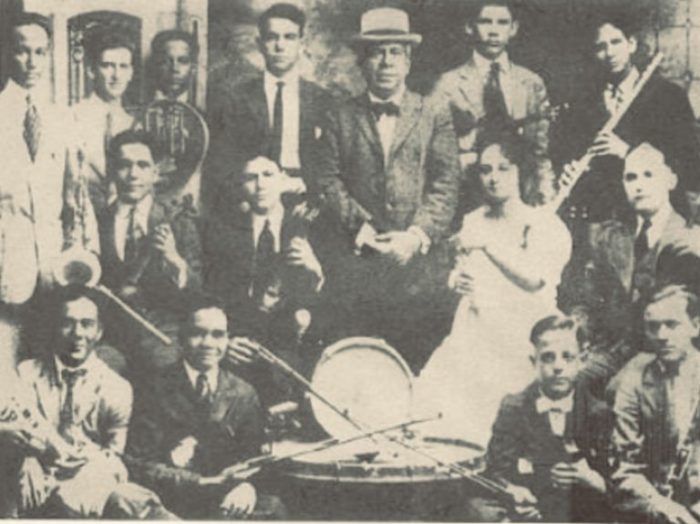 MANUEL TIZOL MARQUEZ was part of a prestigious dynasty of musicians. He was the son of Eusebio Tizol Burdonis and Saturnina Márquez Roselló. At the age of four, he was initiated by his father – a notable teacher – in learning the violin. Later he trained in the other bow instruments and the piano. In 1890, at thirteen, he played the viola and composed a piece for a chamber quintet that included his brothers Eusebio, Gervasio, Facundo and José Belén. Later, he was in demand as a violinist, violist, and double bassist with visiting orchestras, opera companies, and zarzuelas.

Tizol is the founder of the Concert Society of San Juan (1913), the Harmonic Club of San Juan (1923), and the first Symphony Orchestra (1926). Also, he led popular dance orchestras, recorded for Columbia Records (1910), and directed the Municipal Band of San Juan, whose alumni include the tubist and bass player, Rafael Escudero, his nephew, the valve trombonist Juan Tizol, and Rafael Hernandez, one of the most significant musicians and composers in Puerto Rico’s history.

From 1900 to 1912 he directed the Band of the Charity College of San Juan and founded the Aguadilla Firefighters Band. Also, he presided over the Fine Arts Section of the Puerto Rican Athenaeum and created an octet that enlivened banquets, wedding receptions, and other social activities.

As the founder of the Harmonic Club of San Juan Tizol, he led an orchestra that consisted of the piano, five violins, two cellos, a viola, double-bass, two flutes, and a clarinet.

From 1926 to 1928 Tizol conducted the Symphony Orchestra. Also, he was entrusted with the direction of the Insular Girls Home Band in the municipality of Cayey.

In his later years, Tizol directed the National Guard Band and various chamber ensembles. His children, Jose de Jesus, Gervasio, and Mateo, were excellent violinists. Of the three, Gervasio was recognized as the most talented (he died at a young age in Spain). Mateo excelled as a director and nephew, Juan Tizol is mostly remembered as a valuable member of the Duke Ellington Orchestra and a progenitor of Latin jazz.

Historians and researchers argue Manuel Tizol might have been the “Puerto Rican Connection” sought by Lt. James Reese Europe. In brief, Europe visited the island in May 1917 to recruit soldiers, reed, and brass players for the 369th Regiment, which distinguished itself in battle during WW I and was who introduced an early form of jazz to France. Thus far, the connection remains unknown, but Tizol was a contractor for orchestras formed in San Juan, visiting opera companies and at least one ballet group. According to Donald Thompson and Martha Moreno de Schwartz, Tizol prepared a list of potential musicians and recruits for Europe before he visited the island.

Photo: Manuel Tizol Orchestra in 1910. The second seated from right to left is Juan Tizol, ten years old, with a violin.