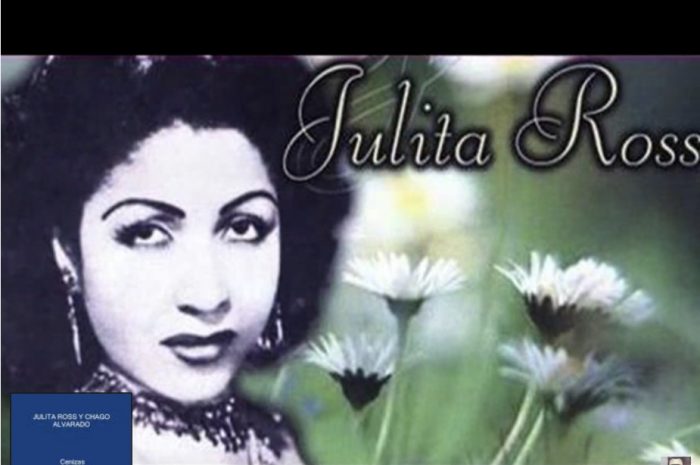 VOCALIST, JULITA ROSS is known for her sultry interpretations of romantic boleros, but her forte was La Danza, which earned her the title, the “Great Lady of the Danza.”

Julita was born in the Arenales section of Arecibo, Puerto Rico, to Ramón Ross Guzmán and Clemencia Alezo Ortiz. At 4, her family moved to Santurce, where she received her primary and secondary education and graduated from Central High School. It was there that she participated in a wide variety of social and artistic functions and developed her voice.

In 1940, she joined the vocal group, Industrias Nativas (Native Industries), produced by the brothers Jacobo, Luis, and William Córdova Chirino, who transmitted through the radio station, WIAC, until 1945.

During World War II, Julita entertained the troops as part of the “USO” (United Service Organization). Afterward, she moved to New York, where she appeared in Hispanic venues such as El Teatro Puerto Rico and on the radio stations, WWRL and WHOM.

In 1947 she was offered a recording contract. Also, she recorded the boleros “Diez Años” (Ten Years) by Rafael Hernandez and “Aunque Me Llores” (If You Cry For Me) by Claudio Ferrer. In 1948, she recorded and interpreted forty-nine Danzas by composers such as Juan Morel Campos, Manuel Gregorio Tavarez, Rafael Alers, and Angel Mislan, among others.

In 1953, she returned to Puerto Rico and hosted the radio show “La Voz de Borinquen” (The voice of Puerto Rico) on WNEL. It was there that she earned the title, “The Great Lady of the Danza.” Her debut recording was titled “Julita Ross Canta Danzas” (Julita Ross sings Danzas).

In 1961, she recorded “Julita y Chago” and 1968 “La Siempre Recordada Julita Ross” (The Always Remembered Julita Ross). In 1966, she moved to Levittown, Toa Baja, where she participated in a wide variety of cultural activities sponsored by The Institute of Puerto Rican Culture. In 1974, she was honored by the Cayetano Coll y Toste Club in Arecibo. Also, she was awarded the keys to the city, and inducted into the Arecibo Hall of Fame.

Julita Ross died on June 29, 1981, in Levittown, Toa Baja. The cause of death was a heart attack. She is buried at Los Cipreses Cemetery in Bayamón. Two-years after her death, the Mayor of Toa Baja, honored her by renaming the Levittown theater “El Teatro de Bellas Artes de Julita Ross.”

Editor’s Note: If you or someone you know has access to credible information about Julita Ross, please contact me at delapena2911@gmail.com. Information must be verified prior to publication.