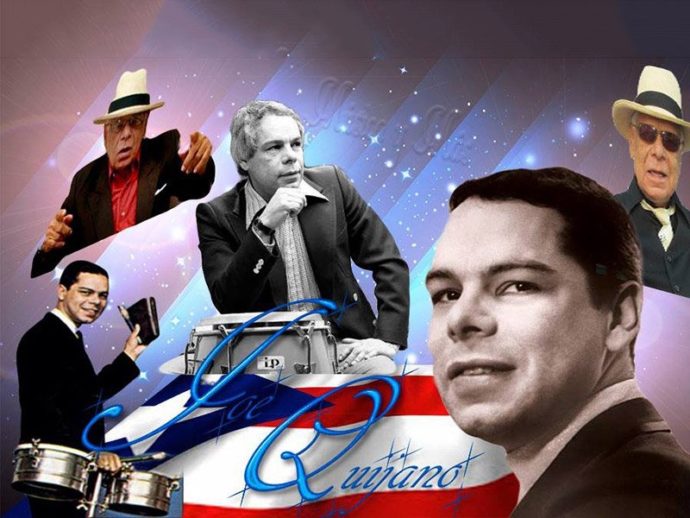 When the group played their first gig at the Hunt’s Point Palace in the Bronx, the repertoire consisted of three tunes, Abaniquito, La Toalla, and Rafael Hernandez’s El Cumbanchero, which they played ad nauseam. One year later the group added three trumpets and it evolved into The Orlando Marin Conjunto. When Marin was inducted into the Army, Quijano took his place.

While attending Manhattan’s High School of Industrial Arts and studying commercial art, Quijano worked part-time for the Translux Corporation, a stone’s throw from the original Palladium Ballroom. “My boss and dear friend, Douglas Sterling Paddock let me take my lunch hour whenever there was an orchestra rehearsing around the corner,” says Quijano.

In 1956, Quijano visited Cuba on a working vacation. He made a few sales, but mostly he saw his favorite bands and met Beny More, Roberto Faz, Miguelito Cuni, Jose Fajardo, and Celia Cruz and became enamored with the sound of The Senen Suarez Group. He returned to New York with stock arrangements, instruments, and a concept that combined two trumpets, a flute, and a rhythm section with a Charanga feel. After a few months, Charlie Palmieri came up with an instrumental version of the tune, Amor and The Conjunto Cachana was born.

After a stint with Tico Records, Quijano went to work for Good One Stop, a wholesaler distributor, servicing retail stores and jukeboxes. He convinced his bosses, Al Deutsch, and Artie Schrift, to finance two (45 RPM) tunes on the AQA label titled Rumba En Navidad and Descarga Charanga. Thanks to Paramount Vending, the records were in every jukebox in New York.

Afterward, Quijano was approached by Jack Goodman of Spanoramic Records, and the LP’s A Catano, and Volvi a Catano were recorded. Both were huge hits in South America, but Quijano still roamed the halls of CBS seeking a recording contract. The “someone” was Ernie Altshuler, who interviewed Quijano, Johnny Mathis, and Tony Bennett on the same day. In the summer of 1960, Joe Quijano y Su Conjunto performed at the Spring Rock Country Club with Altshuler and his wife in attendance, and Quijano was offered a contract.

In the early 60s, Quijano started his own company. Being an amateur Jai-Alai player, he called the company Cesta Records (a Cesta is a basket used in the game) and recorded the album, The Fiddler On The Roof Goes Latin.

Also, two notable albums by the Cesta All-Stars: Live Jam Session (the 1960s), and Salsa Festival (the 1970s), which was a 1967 recording by the Alegre All-Stars under the direction of Charlie Palmieri made while Santiago was working as a staff producer at Musicor. Al Santiago (founder of the Alegre All-Stars) was overextended and couldn’t afford to release the material, so he sold the tapes to Quijano.

Quijano holds the distinction of being the first artist to record a composition by the great Puerto Rican composer, Tite Curet Alonso titled Efectivamente.

Over the years he quietly organized tributes and fundraisers for musicians in need. Also, in 1979 he produced and promoted The Tito Puente Roast, which exposed the Mambo King to a broader audience. Moreover, he served as the Director of Public Relations for the Agency for Drug Addiction Rehabilitation (LUCHA) in New York in the 1970s and 80s.

In 1992 Quijano was involved in a motorcycle accident in Isla Verde, Puerto Rico. The accident damaged his spine and led to six surgeries from which he never fully recovered. Afterward, Quijano walked with a cane. After the accident, he devoted much of his time to promoting events and reissuing his records in a compact disc format.

According to Max Salazar, “Despite all his individual accomplishments, the thing that has made him proudest is his Puerto Rican heritage. Quijano, like his hero Noro Morales, recorded tunes whose titles are a tribute to the Puerto Rican culture such as Mayaguez, Catano, Barrio Obrero, Bayamon, En Mi Viejo San Juan, Puerta de Tierra as well as a Christmas album, which contains the tune, Un Jibaro en Nueva York.”

Quijano credits much of his success to the late, great Charlie Palmieri, whose melodic arrangements sold his recordings.

In 2018 Joe Quijano and Conjunto Cachana performed at Damrosch Park as part of Lincoln Center’s Midsummer Night Swing. Also, in 2000 he presented the group at The Hotel Normandie in San Juan.