Gregorio Ropero y Tavárez, also known as “The Father of the Puerto Rican Danza” was a notable pianist, composer, and educator and the first Puerto Rican to study at the Paris Conservatory.

He was born on November 28, 1843, in San Juan, the son of a French father, Manuel Alejandro Tavárez, and a Puerto Rican mother, Dominga Ropero.

Tavárez Sr. arrived in Puerto Rico in 1938. By most accounts, he was a peaceful man, a liberal, and a forward thinker with musical talent. After trying his luck at various jobs, he acquired a job as a bookkeeper at a local pharmacy. Above all, he was determined to provide a good education for his children.

Tavarez’s first musical adventures began in 1848 at the Caleta de La Monjas and Retreat run by Don Ramon Maria Castano. Recognizing his son’s musical talents, Manuel Sr. took Manuel Jr. to the Catalan musician and maestro Don Juan Cabrizas, who taught him piano and harmony. From the outset, Manuel was a precocious child with a flair for composition and improvisation, which drove his instructor to distraction. Later, he was entrusted to the Presbyterian Don Domingo Delgado, organist of the Holy Cathedral, who taught Manuel music theory and harmony.

In 1856, the opera Guarionex premiered the libretto by Don Alejandro Tapia based on his novel La Palma del Cacique, which was instrumental to Manuel’s development. In no time, his fame as a pianist, composer was recognized by the many significant figures in the artistic world. The death of his harmony and composition teacher, Don Domingo Delgado, impeded Tavarez’s development. Also, for a time, he concentrated on composing as opposed to studying the piano.

In 1858, at 15, because of his exceptional talent, the Sociedad Económica de Amigos del País, awarded Manuel a scholarship to study at the Paris Conservatory of Music. Among his instructors was the French composer Daniel Auber and Eugen d’Albert of Germany. At the Conservatory, Tavarez composed the piece, Gran Fantasía de Concierto.

The arrival of the Italian opera singer Adelina Patti (1843-1919) and the American composer, pianist Luis Moreau Gottschalk (1829-1869) in 1857 distracted the budding musician. He was the same age as Adelina Patti and marveled at the prodigy that fascinated the salons (performance spaces) of Puerto Rico. Also, he was astonished by Gottschalk’s bravado and virtuosity and riveted by his music. Interestingly, Gottschalk was the first virtuoso to visit Puerto Rico who came face-to-face with Tavarez. Thanks to Patti and Gottschalk, Tavarez realized the need to leave the island and take his music to a higher level. Thus, his decision to study in Paris.

After ten months at the Paris Conservatory, Tavárez suffered a cerebral aneurism that severely damaged his hearing and debilitated his right hand. Unable to complete his studies, he returned to San Juan, where he worked as a piano professor and taught the French piano technique. Also, he taught in San Juan, Caguas, and Ponce, where he settled permanently in 1870. Among his most outstanding students were the future composers Juan Morel Campos and Francisco Cortés.

Among his compositions are the symphony “A Campeche,” which received an award from the Sociedad Económica Amigos del País; the Danzas “Margarita,” “Ausencia” and “Pobre Corazón;” the waltzes “El 24 de Junio” and “Vals de Concierto” (written for the left hand) and” Cuadros Musicales: Recuerdos de Antaño,” “Virgen de Borinquen”, “Dicha Fugaz” and “La Hamaca” and “Un Recuerdito” (for the pianist, Ana Otero, who he named as his successor). Also, the symphony’s “Souvenir de Puerto Rico” and “Aires del País”, where he incorporated elements of traditional folkloric music and classical music.

In 1882 Tavárez composed the march for piano titled, “Redención,” which, despite its patriotic bent, won the music competition at the Ponce Fair. Also, he performed in concerts, recitals, and festivals, mostly in and around Ponce, and composed the music for the poem “Súplica a Mis Amigos” by José Gautier Benítez.

Tavárez also holds the distinction of being the first “romantic” to aspire to different sources of Romanticism. The melodic structure of his compositions is typical of the German romantic school with cadences of French Romanticism, which he absorbed as a student in France. Also, he is credited with creating Creole music that incorporates elements of the Cuban Habanera, indigenous Puerto Rican music – guiro, drum, and guitar – and African rhythms.

Some of his most well-known danzas include “La Sensitiva” (The Sensitive One), “La Ondina, La Ausencia” (Absense),”¿Me amas?” (Do You Love Me?, “Un Recuerdito” (A Little Remembrance), “Margarita” and “Pobre Corazón” (Poor Heart).

Tavárez died in Ponce on July 1, 1883, at 39. His premature death deprived the island of one of its most exceptional musicians. He is buried in the Panteón Nacional Román de Castro cemetery in the municipality of Ponce. 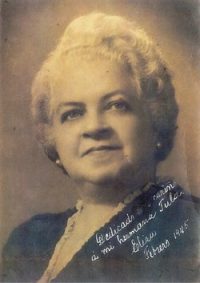 Elisa studied music with the distinguished Puerto Rican pianist Aristedes Chavier and in Madrid, Spain under Pilar de la Mora at the Royal Music Conservatory. In total, she spent four years in Spain, where, she received financial assistance and gained recognition as a pianist.

Also, Elisa won first place in a performance competition and was invited to perform for the Queen of Spain, Maria Cristina. As a token of her appreciation, the queen gifted her a traditional Spanish fan, which she kept as a memento her entire life.

After returning to Puerto Rico, Elisa performed numerous concerts where she focused on the works of Chopin, Liszt, Mendelssohn, Beethoven, among others. According to writer Trina Padilla de Sanz, Tavarez had a style that resembled Chopin (her father Gregorio Tavarez was sometimes called the “Chopin of Puerto Rico”). Padilla wrote, “as with Chopin, Elisa’s piano never ‘screamed’; instead, it focused on the soft and romantic approach to her interpretations.”

Elisa also served as an unofficial Puerto Rican Ambassador when she performed concerts throughout France, Central America, Cuba, and the United States. In October 1935 she arrived in New York aboard the legendary steamship SS Borinquen and participated in a tribute to the Boricua composer Juan Morel Campos.

Elisa Tavárez y Colon died on April 4, 1960, in Santurce, San Juan. She is buried at the Buxeda Cemetery in Isla Verde in Carolina, Puerto Rico, where many distinguished musicians and government leaders are interred.

Elisa, along with Ana Otero, Amalia Paoli, Genoveva Arteaga, several women of the Sicardó family, and Trina Padilla de Sanz was part of an impressive group of women who created institutions to provide music education for the youth in the 19th and early 20th centuries. Also, she taught music in San Juan, Arecibo, Manati, and Utuado and tirelessly struggled for the establishment of a permanent Puerto Rico symphony that would be accessible for all audiences to enjoy. She is recognized in Ponce at the Park of the Illustrious Ponce Citizens.