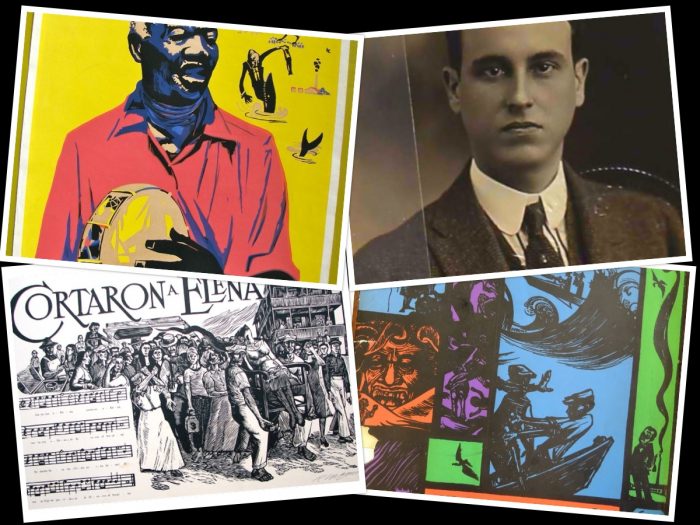 DR. ENRIQUE TOMÁS BLÁNCO GEIGEL aka Tomas Blánco was born and raised in San Juan, Puerto Rico, where he received his primary and secondary education. After graduation, he moved to the United States and enrolled at Georgetown University in Washington D. C., where he studied medicine and pharmacy.

From 1930 to 1935 Blánco traveled to Europe and lived in Spain. There, he developed a passion for the arts and literature and joined a group of writers and intellectuals known as La Generacion 30. Among them, Antonio S. Pedreira (author of the book, Insularismo) and the essayist, educator, co-founder of the Puerto Rican Academy of Spanish Language, Margot Arce de Vazquez. The group concerned itself with “an emerging discussion about the island’s potential cultural assimilation with the United States. This issue prompted the attention and recognition of nationalistic values.”

After Spain, Blánco returned to Puerto Rico, where he composed some of his most notable works including Prontuario Historico de Puerto Rico (Historical Handbook of Puerto Rico) and El Prejuicio Racial in Puerto Rico (Racial Prejudice in Puerto Rico), which examines the slave trade and racism on the island. In Blanco’s view, “Prejudice (on the island) is social rather than racial, and its manifestations are more foolish and ridiculous than violent and cruel.” But he warns there are “some Creoles who, due to mental mimicry and colonialism and unconscious intellectualism, tend to exaggerate their degree and quantity.” Also, he described the African presence in Puerto Rico as “beneficial to the uniqueness and richness of the country.”

In 1934, Blanco penned the seminal essay, Elogio de la Plena (In Praise of Plena), for the publication Ateneo Puertorriqueno. The essay speaks about the genre’s popularity, the marginalization of its Afro-Puerto Rican roots, and ignorance surrounding its origins. He dedicated the article to the city of Ponce (the birthplace of Plena) and Manuel A. Jimenez aka “El Canario,” who did much to spread the genre’s popularity in the 1930s along with “Bumbún” (Bum Bum) Oppenheimer, Augusto Cohén, Rafael Hernández, Julio “Malango” Alvarado, “Tripope,” and Mario Rivera.

Two decades later (1955) Blanco composed a second essay, which appears in Lorenzo Homar and Rafael Tufiño’s landmark portfolio Las Plenas, which establishes a connection between Plena and its Afro-Caribbean roots and expands on the claims he employed in Elogio de la Plena. 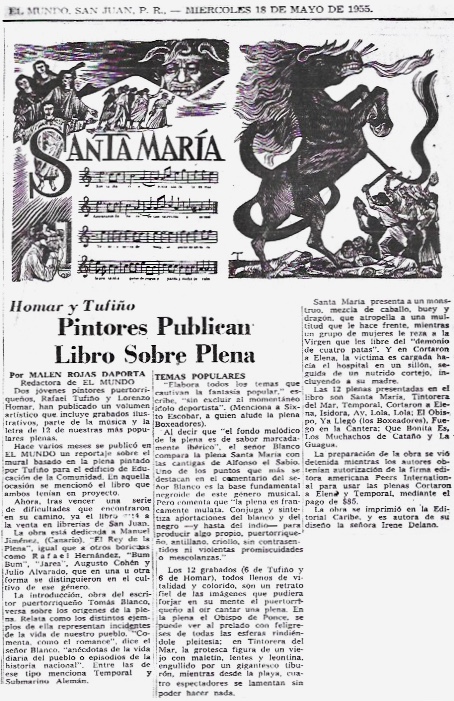 In a memorial publication of Revista del Instituto de Cultura (April-June 1975), Blanco is described as, “A man with a cosmopolitan spirit, vast culture, fine critical spirit, and great aesthetic sensitivity. He left a permanent (body of) work in the varied fields of literary criticism, historical interpretation, novels, short stories, and poetry.”

Tomas Blánco died in San Juan in 1975. He is buried in El Cementerio Santa Maria Magdalena de Pazzis in San Juan. His political and social essays are widely considered essential reading for understanding Puerto Rican culture in the 19th and 20th centuries.