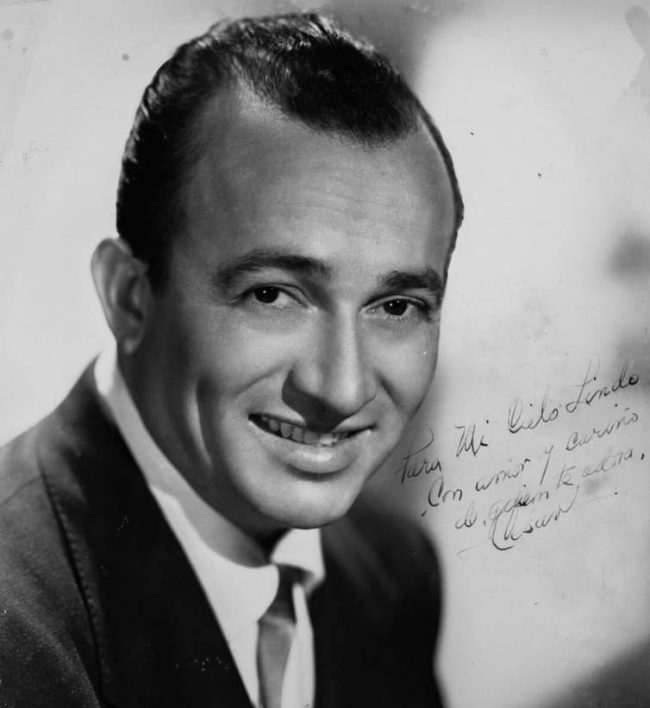 Boricua Pioneer, trumpeter, bandleader César Concepción (Césario Concépción Martinez) holds a place of honor in the pantheon of Puerto Rican music. “He is remembered as a virtuoso trumpeter and a melodist of fine sensitivity who bequeathed no less than one hundred beautiful boleros to our romantic pentagram and raised the Plena to the category of ‘Parlor Music,” introducing it to the most fabulous halls. According to Miguel Lopez of The National Foundation for Puerto Rican Culture, “Concépción is also the founder and leader of one of the most sensational orchestras to emerge in the 20th century.”

Concépción was born in the mountain municipality of Cayey to Tomás Concépción and Margarita Martínez in 1909. He completed elementary school at the Luis Muñoz Rivera School and attended the Benigno Carrión School in Cayey.

At nine, Concépción gravitated to the trumpet and studied with the professor, director of the Cayey Municipal Band, Claudio Torres. At thirteen, he was part of a group that entertained Don Emilio Martinez’s silent movie theater audiences.

In 1925, the pianist Augusto Rodríguez Amador offered the 16-year-old prodigy a position with the Midnight Serenaders, of which he was a member of the group for seven years. After that, he joined Ralph Sanchez and his Symphonians. His first trip to the Big Apple was in March 1927, where he stayed until August of the same year and returned in 1935.

According to the historian Richard Blondet, Concépción made a name for himself in New York City as a sideman, including a band led by Pedro “Piquito” Marcano, one of the foremost Puerto Rican bandleaders, composers, and vocalists of the 1930s and 40s, and the director of the Cuarteto Marcano, which specialized in boleros (soulful ballads). Marcano worked closely with Pedro Flores, Pedro Ortíz Dávila, Bobby Capó, and Tito Rodríguez among others. Also, Concépción performed with the Cuban bandleader Oscar De La Rosa. In 1939, the latter led an all-star band that included the pianist Jose Curbelo, Machito.Alfredo Valdes Sr. on vocals and Concépción on trumpet. The band performed at the Picadilly Hotel in Herald Square.

Also, Concépción joined the Eddie La Baron Orchestra, which performed regularly at the Rainbow Room and participated in sessions with some of the most prominent Latin bands in the city, including Xavier Cugat, Ernic Madriguera, Don Maya, Jose Morand, Carlos Molina, and Nano Rodrigo, among others. Also, he collaborated with the renowned composer Pedro Flores. Concépción’s connection with LeBaron lasted until 1940.

Concépción’s orchestra owes some of its popularity to its daily participation in the radio program, La Roulette Musical, and television appearances and the vocalist, Joe Valle (his principal singer after “El Boy”).

According to the writer, historian Frank Figueroa, “The band’s popularity was enhanced by its many recordings that included Plenas and other typical rhythms. Concépción capitalized on the public’s love of baseball and wrote special Plenas dedicated to the island’s professional teams. Who can forget Ponce, Plena En San, La Plena Criolla, and Santurce?”

From 1950 to 1952, Concépción’s orchestra was the house band at the Caribe Hilton. Also, from 1958 to 1968 the orchestra held court at the Hotel Flamboyan, where it accompanied many international artists who passed through the hotel’s doors.

In 1968, Concépción disbanded the orchestra, relocated to New York, and retired. Four years later, he came out of retirement, returned to Puerto Rico, and organized a new band with Joe Valle.

César Concépción died of a heart attack on March 11, 1974. At the time of his death, Concépción was making plans to remarry his second wife, Elvira Peña, who he divorced but never stopped living with.

In 1983, nine years after Concépción’s death, the lawyer, politician, and pianist, Nicolás Nogueras Cartagena, reunited some of Concépción’s original bandmembers and recreated his sound. The orchestra performed on Sundays at the Caribe Hilton Hotel and the San Juan Fine Arts Center until 1997.

In 2019, the Puerto Rican icon, vocalist, Danny Rivera, and musical director and trumpeter Humberto Ramirez released the album Mil Años de Plena – Tribute to César Concépción. In the liner notes, Rivera recounts the experience of auditioning and performing with the orchestra. Also, he refers to the band as “his university, his school, his opportunity.”

According to Humberto Ramirez, “César Concépción created new sounds by merging traditional Plena with the Mambo and bringing it to the ballroom. Cesar Concépción left the sound of his trumpet and his orchestra for the enjoyment of generations to come.”