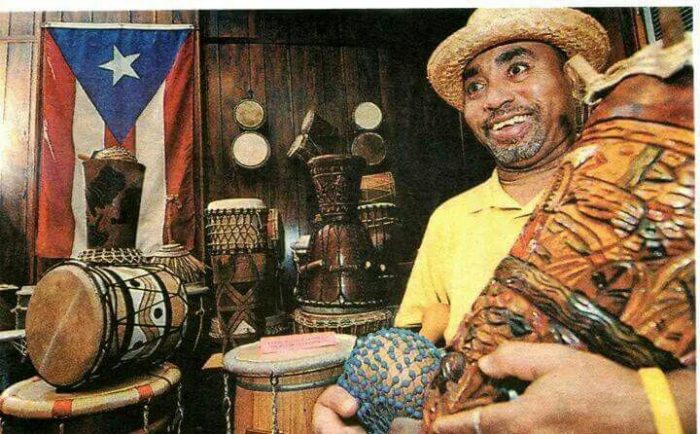 According to his widow, Carmín Colón, “The teacher of teachers continues in our hearts. He was a person well given to music, culture, people and liked to teach. He left a very large legacy for this country.” Also, she revealed Maldonado died in peace with a characteristic smile on his face.

Maldonado was born on October 16, 1951, in Barrio Obrero in Santurce, Puerto Rico. He grew up in the street called Calle Cortijo (named after Rafael Cortijo). His father, (Ruben), was a bassist in several bands, and his sister and aunt were vocalists.

Initially, Maldonado studied the bass and the piano, but he naturally gravitated to percussion. He studied under Julio César “Maco” Rivera, a master drummer well versed in the art of Afro-Cuban drumming, who taught Maldonado the rudiments of the congas, bongos, timbales, and other hand drums. Also, he introduced him to the batá drums and the Yoruba sacred ceremonial rituals of Orisha.

According to an interview with Maldonado in the newspaper, El Nuevo Dia, the nickname “Cachete” is a reference to Maldonado’s prominent cheeks!

In Puerto Rico, he performed with Johnny El Bravo and Danny Gonzalez. In the 1970s, he relocated to New York, where he studied with Carlos “Patato’ Valdés, Julito Collazo, and performed with the group,  La Conspiración. This led to a collaboration with the pianist Larry Harlow and the highly acclaimed record “Hommy.” Also, tours of North and South America.

In 1973 he traveled to Cuba with the group, Tipica ’73, as part of a cultural exchange program. There, he immersed himself in Afro-Cuban percussion. Shortly after that, he joined Gato Barbieri’s band and played with “El Gato” for four years. The experience opened doors for “Cachete” in the jazz community.

From 1978 to 1980, Maldonado participated in New York’s Jazz Mobile project. Also, the New York Experimental Ensemble, a group of free-thinking musicians who experimented with jazz and Afro-Cuban rhythms. Around the same time, he met the pianist, Eric Figueroa, and the bassist Eddie “GuaGua” Rivera, and the seeds for Batacumbele were sown.

Surprisingly, from 1997 to 1999, Maldonado donned a cowboy hat and boots and became the percussionist for the popular Mexican rock group Los Jaguares.

In 2002 Maldonado suffered a mild stroke, followed by a more debilitating stroke 2005. Over time he regained his strength and returned to performing, albeit in a limited capacity.

Not one to be deterred, in 2003 Maldonado and Los Majaderos released a self-titled album that was an instant hit and solidified his standing as an innovator and leader.

In 2009, the members of Batacumbele reunited at the Guillermo Angulo Coliseum in Carolina, PR, to celebrate the group’s 30th anniversary.

2010 saw the release of the highly acclaimed “Rumba Boricua Campesina.”

In 2015, Maldonado announced a new incarnation of Batacumbele. The group performed at several festivals in Puerto Rico and released the single “La Negra Tomasa,” but because of health concerns, the project never came to fruition.

Through it all, Maldonado directed and conducted workshops for Puerto Rico’s “Taller Cultural Afro-Antillano” for sixteen years.

“This farewell belongs to his body and its existence in this dimension, but we will not forget it because the music he left us will live forever. Those of us here are demonstrating nothing more is needed to remember those who deserve to be remembered,” said Noel Rosado, who among others, lamented the fact the Puerto Rican government never officially paid tribute to Maldonado during his lifetime.

Maldonado’s body was viewed at the Ehret funeral home in Río Piedras, from where the funeral procession departed on Tuesday to the cemetery of Villa Palmeras in San Juan.

Angel “Cachete” Maldonado has earned a special place in the pantheon of percussion masters. Also, his courage and disposition in the face of a debilitating condition is a testament to his dedication to the music, fortitude, and character. Cachete was, and always will be remembered as, el “Hijo Del Tambó.”