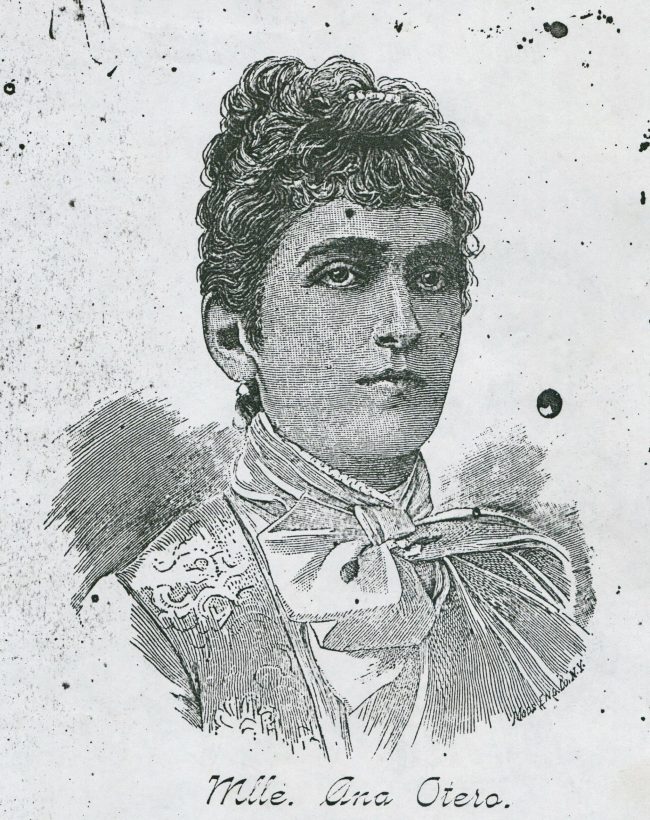 Ana (Anita) Hernández Otero was born in the villa of Humacao to Don Ignacio Otero y Aquilina and Doña Carmen Hernández Ramos on July 24, 1861. She was one of sixteen children and eight who survived and grew up in a home that was the equivalent of a “school of fine arts.” 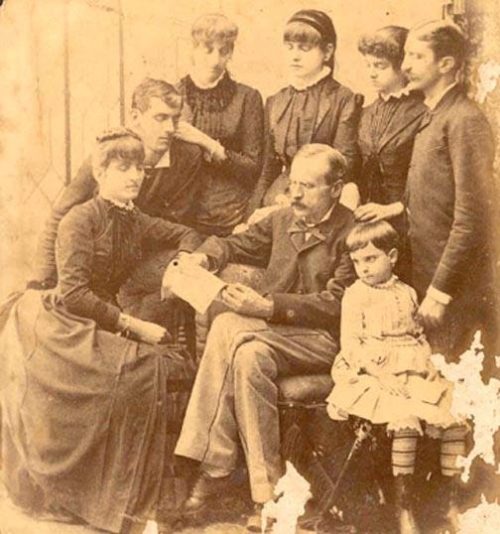 Her father, Don Ignacio was a man of many talents. In addition to founding The Otero Theater and Otero Music Academy he was was a teacher, artisan, journalist, printer, and author of the book “Rudiments of Music Expressly Written for Children.” Don Ignacio is also credited with bringing the first piano, printing press, and sewing machine to Humacao, where he earned the title, “Dean of Entrepreneurs.”

Doña Carmen was an educated woman, a voracious reader, and an arts patron. She instilled in her children a love for the arts, a thirst for knowledge, and a degree of independence that was not common the mid-19th century.

The Oteros homeschooled the children until they reached high school age. Also, under the tutelage of Don Ignacio and several instructors, Ana’s siblings studied music, achieved prominence and were active participants in Ana’s life and career. Felipe was a violinist, pianist, painter, composer, and singer; Carmen was a soprano and pianist; Beatriz was a pianist and teacher; Tomás was an author, double bass player, pianist, and an expert piano tuner; Josefa was a teacher, singer, and pianist, and Modesta and Julia were pianists and teachers.

Ana took up the piano at four and honed her skills giving lessons to the neighbor’s children and participating in operettas, zarzuelas and benefit concerts for the Catholic Church of Humacao and the Asylum for the Poor at the Otero Theater. At 14, Ana was already an accomplished pianist.

There is speculation that the renowned pianist, composer Manuel Gregorio Tavárez (“Father of the Danza”) played a significant role in Ana’s decision to study abroad. He was a friend of the family/ Also, at 15, Tavárez attended the Paris Conservatory, however a life-threatening illness forced the young maestro to discontinue his studies and return to Puerto Rico. When Tavárez heard Anita play, he named her his “worthy successor.”

In those days, the Spanish government did not support local talent. Also, popular (entertainment) music was in vogue, and military band’s filled the void. The Oteros were a working-class family. They had to pool their resources to raise money for Ana’s education. From February 14, 1866, to April 1887, Ana and her family toured and performed in thirteen Puerto Rican coastal towns, beginning with the Villa de Humacao Theater, where Ana made history as the first woman to direct the zarzuela “Artist’s en Miniatura.” Later, many renowned maestros, including Juan Morel Campos, Julio Andino, and orchestras in San German and Mayaguez yielded their batons to Ana.

THE PARIS CONSERVATORY AND BEYOND

Initially, Don Ignacio was opposed to Ana traveling alone; however, he relented when her eldest brother, Felipe agreed to accompany her on her travels. In June (1887), Ana and Felipe boarded the steamship Hernan Cortes, bound for Paris via Barcelona.

The voyage allowed Ana to perform for the passengers and crew and participate in a formal benefit concert for The Shipwreck Rescue Society. Later, a writer who identifies himself as, “E,” wrote the following in the publication “La Opera.” “To those who doubt the existence of a mermaid, I have seen one. Ana Otero is a star in the sky of Puerto Rico. She was our good angel during the crossing.”

When Ana and Felipe arrived in Barcelona, they were embraced by the city’s Puerto Rican community. Shortly after that, Ana performed a benefit concert at the Dorado Theater. Unbeknownst to her, in the audience was the French flutist and entertainer, Joseph Pujol. After the performance, Ana requested a private audience with the maestro and performed the composition “El Fausto.” Stirred by her brilliance, Pujol declared Anita “a most accomplished pianist and an excellent candidate for the Paris Conservatory.”

Life in Paris was challenging. Ana and Felipe had to learn the language, adapt to a new environment, and survive on a modest budget. Also, in November 1887 Ana underwent the Paris Conservatory’s rigorous acceptance process, which included competing against foreigners. In the end. the jury, in attention to Ana’s talent and disposition, awarded her a place until a vacancy occurred. In this way Ana was able to take private lessons with the renowned teacher and pianist Henry Fissot. Also, she studied harmony and composition classes with Maestro Teaudon, who remarked on Ana’s “disposition for music and the progress she made in such a short time.”

At the end of Ana’s first year at the Conservatory her educational funds were depleted. She and Felipe returned to Barcelona and moved in with their sister Carmen Otero de Gálvez and her husband, Julio Gálvez Canizares, a Spanish officer she met and married in Puerto Rico. It is worth noting that their son, Santiago Gálvez Otero, was the premier violinist for the Madrid Conservatory of Music in Barcelona however, tragically, he died young.

In 1888, Barcelona hosted a Universal Exposition. There, Ana managed to get the renowned pianist and composer Isaac Albéniz to grant her an interview and critique her interpretations of his works. Impressed by her command of the piano and technique, the maestro suggested she return to France and study with his mentor and professor, Antoine Francois Marmontel.

Unbeknownst Ana, her compatriots followed her exploits closely and were highly aware of her exploits and financial situation. In response, the educator, writer, suffragist Ana Roqué de Duprey, Arturo Aponte and Salvador Fulladosa, among others created the publication “Euterpe” (named for the Greek goddess that presides over music), whose sole purpose was to document Ana’s achievements and raise funds for her education. With the financial assistance she received from the publication, Ana was able to return to continue her studies. 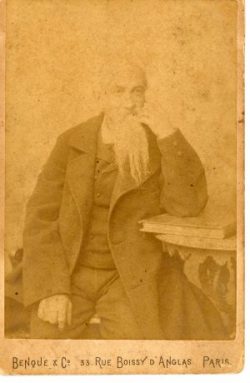 After graduating from the Conservatory, Ana returned to Spain and performed concerts organized by Barcelona’s illustrious piano manufacturer, Casa Erard. According to the Barcelona newspaper, “El Diluvio,” “The pieces were played with exquisite taste, admirable digitation and a splendid illustration of the school at Paris where she finished her education. She is an artist of vocation, and her performance manifested the characteristic musical taste of a daughter of the Antilles.”

Ana’s arrival in New York coincided with the Fourth Centennial of the Discovery of America. On July 27, 1892 she met Jose Marti and the Nicaraguan poet, Ruben Dario, who named her the “Pianist of America.” Also, she dedicated herself to teaching, performing, writing music and representing the famous piano manufacturer “Chickering & Son.” 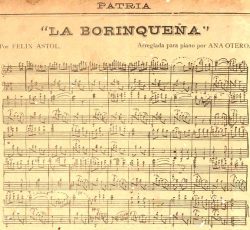 Marti commissioned Ana to arrange the anthem, La Borinqueña, for a rally with the leaders of the Puerto Rican community and the Cuban Revolutionary Party in New York and Chicago. For the occasion, Ana composed new lyrics, which called for, among other things, the “breaking of chains” from the mother country, Spain. The melody is similar to Felix Astol’s version, but Ana’s left hand adds an aristocratic air of Caribbean inspiration. Marti’s newspaper, Patria, published La Borinqueña’s score on September 3, 1892, accompanied by an article by Antiono Velez Alvarado, a collaborator of Marti and Betances.

In November 1894, Don Ignacio took ill and Anita and Felipe returned to Puerto Rico to care for their father. He died on November 6, 1894. Shortly after that, Ana took charge of Don Ignacios’s Music Academy and Felipe took over the family business. 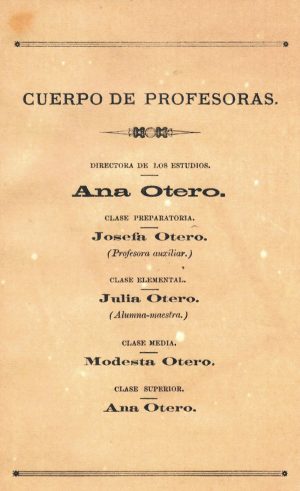 Between 1894 and 1897, Ana suffered a stroke that left her partially paralyzed. Nevertheless, with the help of her sisters, Modesta, Josefa, and Julia, Anita announced the opening of a state-of-the-art music academy for girls in San Juan.

On May 12, 1898, Ana’s mother wrote, “Today, the Yankees have begun to bombard the City (San Juan) starting at 5 AM. The bombing continued until 8 AM. It is a sad and deadly happening for the peace of its inhabitants. As a result of the declaration of war and expecting the bombardment, we left the Capital city on April 23 having to abandon the Music Academy, which perhaps may never open again.”

When the conflict ended, Ana and her sisters established a second music academy in San Juan, which they oversaw until Ana’s death on April 4, 1905.

According to Salvador Abreu Vega, “At an early age, Ana suffered health problems, which gradually weakened her. For a time, she sustained herself by following her Christian faith. Also, she returned to the music academy, where she officiated, played the organ on holidays, and kept a lighter schedule until the end of her existence.”

According to Ana’s death certificate, the cause of death was “mitral insufficiency” (disease of the heart valve).

The local and international press widely covered Ana’s funeral. Three priests officiated the mass, which featured the music of the Italian composer Luigi Cherubini, renowned for composing operas and sacred music. Ana is buried in the Cementerio Civil de Humacao (Eusebio López Ramírez), next to her sister Modesta. 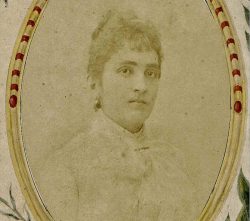 Antonia Sáez sums up Ana, the woman. “Ana was a beautiful, elegant, majestic woman with no airs or artifice. Her character can be summed up in a few words: integrity of purpose and sobriety of words; however, she spoke out when the cause was just. Ana was a cultivated intellectual who spoke several languages. Also, she was deeply concerned about the fate of Puerto Rico. She loved her art and sacrificed everything for her ideals.”

Ana also organized many acts of generosity for artists, the public, and children in need and was thankful to her collaborators, colleagues, the press, and especially the public, who supported Ana and never abandoned her.

In 1961, on the 100th Anniversary of Ana’s birth, members of the Otero family gathered in front of the structure that once housed The Teatro Oriente and stands on the site where the Otero residence once stood.

The Otero Family – In front of the former Teatro Oriente in Humacao. It is also the site where the Otero residence once stood. In the center (in black) is Julia, Ana’s last surviving sister.

In 2011, the production (CD) “Camerata Anita Otero Hernández- An Anthology of Humacaeños” paid tribute to the “Pianist of America” and recognized some of Humacao’s esteemed central figures and teachers, Also, it included the composition, “Premier Pensee,” which Ana composed for her father.

What to make of Ana today? She was the most renowned female pianist, composer, arranger of her generation; the first woman to conduct an orchestra in Puerto Rico; the first Puerto Rican woman to graduate from the Paris Conservatory, the founder of the Otero Music Academy for Girls, a dedicated teacher, an exemplary role model for women and a proud cultural ambassador. Still, in her native Puerto Rico and elsewhere Ana has not received the recognition she deserves.

In a 2011 interview, Ana’s grand-nephew Robur Otero said: “The people’s history is always incomplete. Not all the information about the protagonists, their acts, and works are preserved for future generations. It is especially true in the case of illustrious women, such as Ana Otero. It is up to those who obtain information to share it so that they are not forgotten by history.”

Author’s Note: “Anita Otero, the Pianist of America” is a work-in-progress. New information will be added as it becomes available.