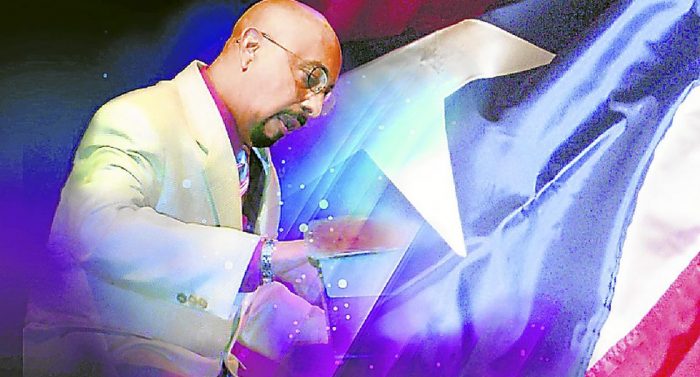 BORANDA is an original composition by the Brazilian singer and songwriter Edu Lobo. It appears on the album EDU E (MARIA) BETHANIA (Elenco, 1966). Boranda comes from the Brazilian indigenous word, “Emborar Andar,” which means “continue walking.” The song was translated for Papo Lucca by Ruben Blades. It appeared on the album EL GIGANTE DEL SUR (THE GIANT OF THE SOUTH). Participants include Ruben Blades, Hector Lavoe, and Yolanda Rivera.

THE LYRICS SPEAK ABOUT A DROUGHT

Ay, Boranda, the land dried up,

Ay, Boranda, the rain did not come,

Ay, Boranda, the rain did not come.

I made more than a thousand promises

I recited so many prayers

God does not listen to me

God does not listen to me.

A LAMENT AND REMEMBRANCE

I am passing (the land). I am crying

I remember the place.

What separates Boranda is Papo Lucca’s now-classic impromptu jazz scat (3:39 to 5:08). Today, it’s the inspiration for The Boranda Challenge, a series of videos that capture emerging artists interpreting the scat in creative and surprising ways. View the videos HERE.

Since its inception in 1954, the legendary La Sonora Ponceña has been one of the most consistent and forward-thinking producers of salsa music. Led by Enrique “Quique” Lucca Caraballo, born in Yauco, Puerto Rico, it has included and collaborated with many of the most talented artists in the world of salsa.

The band evolved from a group called the Conjunto Internacional, formed by Lucca in 1944. That group included Antonio Tato Santaella on bongos, who remained with Lucca for many years.

Lucca was a fan of the Cuban band Sonora Matancera and their musical style that utilized a full percussion section, with trumpets in the horn section for harmony and with the piano and voices. In naming the group, Lucca added the group’s home city of Ponce thus, La Sonora Ponceña.

Enrique “Papo” Lucca Jr. was born in 1946 and displayed enormous talent as a child he was destined to join the band and make a major contribution to the Sonora Ponceña family.

The group evolved in 1956 to include pianist Vicentico Morales and the young Papo at the piano arranging. At 12, Papo recorded his first piano solo. Other early recordings included the popular vocalists Felipe Rodriguez and “Davilita.”

In 1960, the band traveled to New York City to perform at the Manhattan Center and the Puerto Rico Theater.

Papo went on to refine his skills at the Puerto Rico Conservatory of Music, emerging as an accomplished musician and arranger.

During the early years, the group was known mostly for its guarachas and boleros. Also, they utilized different singers that worked with other groups. The band stabilized when Tito Gomez joined the band and stayed until 1974.

1968 was a notable year for the group as Quique stepped aside as musical director, leaving his son Papo in charge. The group embraced the new high fidelity LP technology in their recordings. Also, under Papo’s musical direction it included a fusion of modern and traditional Cuban sounds with jazz improvisation. The group also expanded to four trumpets. Also, Luigi Texidor came on board as a lead singer, and Miguel Ortiz who began as timbalero replaced Tito Gomez. Lastly, Yolanda Rivera and Toñito Ledee came on as lead singers. These elements defined La Sonora Ponceña “sound” for many years.

By 1980, the group had become a great success but perhaps their best work was still ahead of them. Salsa Romantica was hot and the band adjusted to new styles and commercial forces without abandoning the trademarks of their prior success. Papo shone as pianist and arranger and was in great demand. Also, he was featured as an important part of the Fania All-Stars and collaborated with many artists.

The group continues to perform, often reviving the classic songs that made them great. Their recent association with the Salsa Congress has won them new fans that have delighted in the discovery of a group that was instrumental in the genre’s history. The group recently celebrated its 60th Anniversary and is going strong.