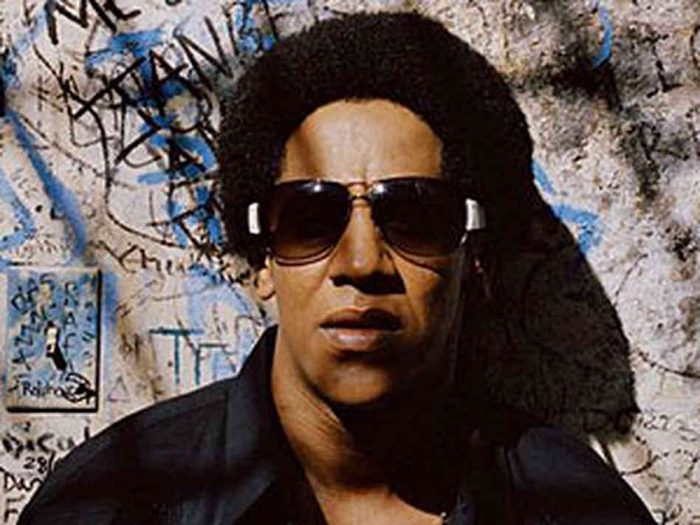 Tego Calderón was born in Santurce, Puerto Rico, in 1972. He grew up in the Río Grande and Carolina, areas of Puerto Rico that maintain some of the strongest Afro-Caribbean influences on the island. Throughout his childhood, Calderón was exposed by his parents to the groundbreaking music of salsa legend Ismael Rivera, and to Latin jazz.

Determined to take his place in the music world, Tego explored a diversity of musical influences, transforming himself into an accomplished musician and vocalist. He attended the Escuela Libre de Música of Puerto Rico, where he concentrated on percussion studies, while also mastering composition and lyrics.

In the late-1980s, Tego moved to Miami, where he graduated from Miami Beach Senior High School. There Calderón soaked up the influences of American hip-hop. Hearing the California gangster rap troupe N.W.A. proved pivotal.

Moving back to Puerto Rico, Calderón also found a new appreciation for such Jamaican dance hall performers as Buju Banton, Super Cat, and Ninja Man. Around the same time, the Reggaeton movement became a force in Puerto Rico. Calderón forged his own multicultural rap style, earning a reputation as a street poet with a fresh musical approach.

He credits fellow Puerto Rican hip-hop pioneer Vico C with inspiring him to rap in Spanish, instead of imitating the English catchphrases of African-American hip-hop. Establishing himself as a new voice of the streets, he made appearances on best-selling Latin hip-hop compilations. A remix collection entitled “El Enemy De Los Guasibiri,” released in 2004, consisted largely of tracks which had appeared on those early compilations.

“El Abayarde” released in 2002, broke sales records in the then-underground Reggaeton genre, selling a remarkable 50,000 on the first day of its release, and Calderón became an overnight Latin superstar. Just three months after making his solo debut, Calderón was greeted with a tumultuous response at a sold-out concert at Roberto Clemente Coliseum in San Juan. The following day, he made history when he became the first rap artist to perform at the traditional National Day of Salsa celebration.

When Tego first headlined New York’s Madison Square Garden in August 2003, the New York Times heralded him as “the most forward-looking performer” of the artists on the bill.

In October 2004, when he returned to the stage of the Garden as the star of the breakthrough “Megatón 2004” event, attendance had swelled from 12,000 to a sold-out 20,000, with a large number of non-Spanish-speaking fans in the audience.

As Latin rappers have been embraced by the American hip-hop culture, Calderón has been featured on a variety of mixtapes and has been invited to add his trademark vocal style to collaborations and remixes by the likes of Fat Joe’s Terror Squad (the 1 smash, “Lean Back”), Usher, 50 Cent, Cypress Hill, and Wyclef Jean, among others.

From his appearances at New York’s annual Puerto Rican Day parades in 2004 and 2005 to become the first Spanish-language artist to be featured on New York’s Power-105, Calderón has been breaking cultural barriers. In a cover story on Calderón and Reggaeton, the Village Voice noted that Tego “almost single-handedly…steered his country’s dominant youth culture out of the island and Latino neighborhoods, and into the American stream of pop consciousness.” Among Calderón’s achievements are Latin Grammy and Billboard Award nominations, a Source Award for “International Artist of the Year,” a Tu Música award, and nominations for La Gente and Lo Nuestro awards.

Tego’s music is an experimental nexus of urban Hip Hop roughness with the poetic Caribbean rhythms transmitted by the early sounds of Salsa music. Not only is Tego, like many of his Salsa heroes, a formidable storyteller…he also incorporates the lyrical percussion and fine rhythmic lines that can be found in the works of Luis Pales Matos.

Calderon’s is by far more than just another Reggaeton performer; he is a consummate street poet at the Vanguard of the Puerto Rican musical and artistic scene. While others break…Calderon’s music is the true essence of a real artist…He creates and repairs…few musicians can boast that.
– IMDb Mini Biography By Jiggiri Records