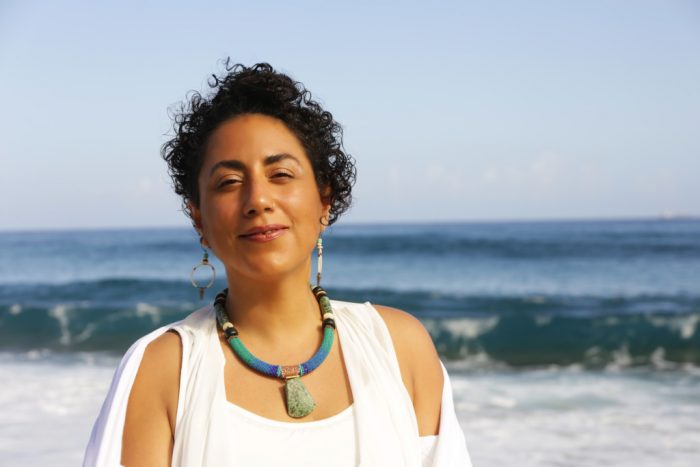 Taína Asili is a New York-based Puerto Rican singer, songwriter, bandleader and activist carrying on the tradition of her ancestors, fusing past and present struggles into one soulful and defiant voice. Her newest artistic work is an energetic fusion of powerful vocals laid over Afro-Latin, reggae, and rock sounds. Residing in Albany, NY, Taína Asili performs her social justice songs as a solo artist, and also with her dynamic eight-piece band, bringing love, resistance, and ancestral remembrance to venues, festivals, conferences and political events across the globe. Taína Asili’s voice exudes strength of Spirit, filling listeners with the fervor for freedom and inspiring audiences to dance to the rhythm of rebellion.

Taina Asili’s music is a powerful force for social change. Billboard Magazine featured her in a list of “11 Songs of Protest & Resistance by Latino Artists,” and The Huffington Post named her as #2 in a list of in a list of “12 Freedom Fighting Bands To Get You Through the Trump Years,” and her music has been aired often on Democracy Now!. Through 2016, Taina participated in the Rock Against The TPP tour, where she joined famed guitarist Tom Morello, Emmy nominated actress Evangeline Lilly, and other high profile artists in a nationwide tour to stop the Trans-Pacific Partnership. In January 2017, Taina performed for almost a million people at The Women’s March on Washington, alongside activists such as Angela Davis, Janet Mock and Gloria Steinem, and artists such as Alicia Keys, Janelle Monae, Toshi Reagon, and Madonna. In April 2017, she spoke and performed at TEDx Greenville, performing her acclaimed song “Freedom,” addressing issues of mass incarceration and state violence.

Asili’s first album War Cry was released in 2010, and her latest album Fruit of Hope was released in 2014. Music producer and journalist David Malachowski writes “…the high energy of the band is simply impossible to ignore. The exotic, incessant rhythms reel you in, and the stabbing horns, hypnotic bass, and Asili’s urgent voice draw you closer.” KC Orcott of The Source writes, “Taina is a true talent and a true social justice warrior.”
Asili’s work expands beyond the realm of music into other forms of media. Her most recent music video “No Es Mi Presidente,” which she wrote and directed, was premiered in Rolling Stone and received national acclaim. Her music video “Freedom”, also received national media attention, including features in Mic.com, Latina Magazine, The Source, Okayplayer, and Feministing, and was described as “a new Black Lives Matter anthem”. It was also featured in The Workers Unite Film Festival. Her music video commentary on climate justice, “And We Walk”, was featured as part of an interview with Taina in Yes! Magazine. Recently, she has dove into the world of podcasting with her new show The Rhythm of Rebellion, featuring interviews with social justice artists from around the world.

Taína is dedicated to using her art as a tool for personal and social transformation. The liberation themes in Taína’s writing are based on her activism in political prisoner liberation, prisoner justice, climate justice, and food justice movements. Taína has an MA in Transformative Language Arts from Goddard College, and besides her performance and activist work, she facilitates art workshops for both youth and adults. In 2005, Taina was given the Transformation Award by the Leeway Foundation for her art and social change work. In 2010, the Fabulous Feminist: Creative Force Award was given to Taína by the Holding Our Own Foundation. In 2015, The Hispanic Coalition NY recognized her as one of their 40 under 40 Rising Stars. In 2016 she received the Jimmy Perry Progressive Leadership Award from Citizen Action NY, and in 2017 she was honored by the City of Albany’s Commission on Human Rights.

“If you look at our history,” she says, “you see over and over that music has played a central role in changing how people think, both for the good and bad. How we make a change in the larger political landscape starts with how we affect one another individually, and music brings a message in a way that opens people—their heart, mind, spirit.”