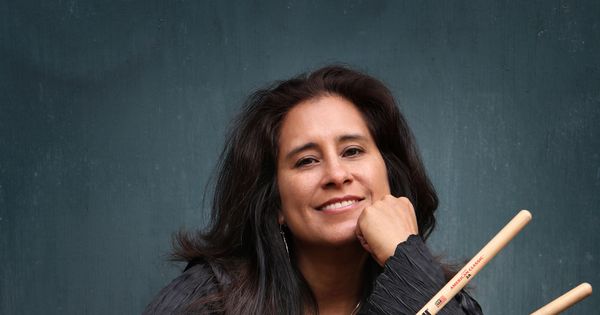 SYLVIA CUENCA is an active drummer on the New York jazz scene who is contributing outstanding performances in a variety of situations. She has had the honor of sharing the bandstand with saxophone legend Joe Henderson for 4 years and trumpet legend Clark Terry for 17 years. The Joe Henderson quartet toured frequently in European countries Norway, Denmark, Sweden, Austria, Belgium, England, Switzerland, France, Italy and Germany and venues across the U.S. In a trio setting she performed with Joe Henderson and Charlie Haden in 1989 and with George Mraz in 1994. She performed with the Clark Terry Quintet and Big Band at Village Vanguard, Birdland, Blue Note, Queen Elizabeth 2, Royal Viking, S.S. Norway jazz cruises and clubs, concerts and festivals in the U.S, Europe, the Caribbean, and South America. While working with the Clark Terry quintet she had the opportunity to perform with guest artists Al Grey, Red Holloway, Jimmy Heath, Frank Wess, Marian McPartland, Dianne Reeves, Joe Williams, and Lou Donaldson to name a few.

She was a guest clinician at the Sisters in Jazz Program at the IAJE Convention in NYC and the Mary Lou Williams Jazz Festival at the Kennedy Center in Washington D.C. Cuenca has been a longtime faculty member at the Jazz for Teens and Pre-Teen Program at NJPAC and the Stanford Jazz Workshop in California. Recently she has been on faculty at Roni Ben-Hur’s Summer Jazz Camp in Vermont. She was an artist-in-residence at various universities in the U.S. and Europe with the Clark Terry Quintet, Eddie Henderson quartet and as a leader with her own groups. In 2014 she received a B.A. degree in Jazz Performance from Empire State University in NYC.

In 1988 and 1991 Cuenca received jazz performance grants from the National Endowment for the Arts and in 1992 she was a semi-finalist in the Thelonious Monk International Drum Competition.