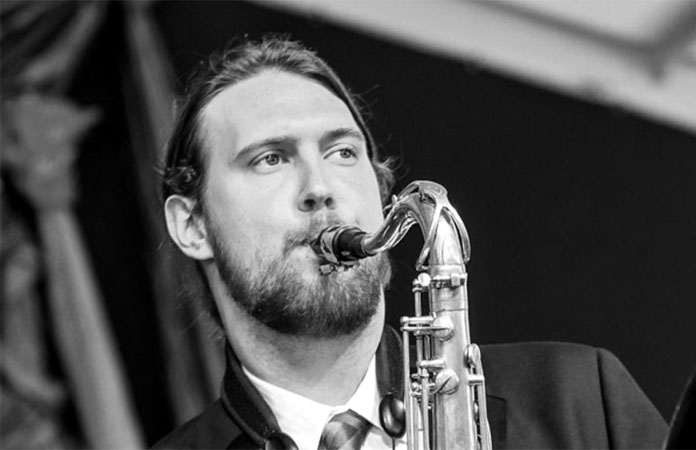 Roy McGrath is a tenor saxophonist, composer, bandleader and sideman living in Chicago, IL. He graduated with a master’s degree in Music from Northwestern University, where he studied under Victor Goines (saxophonist for Jazz at Lincoln Center and Director of Jazz Studies at Northwestern University). He transcribes, arranges, and composes music for a variety of situations, and works as the Woodwind/Brasswind instructor at Flatt’s and Shape Musical Academy in Chicago.

Born and raised in San Juan, PR, Roy sang in school choirs before picking up the saxophone at age 16. After attending the Berklee College of Music Summer Workshop, he earned a full scholarship to attend Berklee School of Music’s Five-Week Summer Performance Program. He honed his improvisational skills by performing with notable jazz pianist and Beach Boys’ alumni Carli Muñoz.

Roy pursued his studies at Loyola University in New Orleans under the tutelage of Tony Dagradi (saxophonist for Astral Project) and composer/arranger John Mahoney. He graduated in 2009 with BM in Jazz Performance. During his time in New Orleans, Roy performed with a variety of musicians including Gustavo Cortiñas-Fouilloux, Trey Boudreaux, Chris Guccione, Joshua Gouzy, Marlena Dzis, Fredy Omar, John Marcey, Café Con Leche, and Easy Company. His performances include three appearances at the New Orleans Jazz and Heritage Festival, and an appearance at the New Orleans French Quarter Fest with Fredy Omar y Su Banda Latina.

Besides his studies, Roy has gained valuable performance experience in a variety of settings. In 2009, he joined the Camp-of-the-Woods wind ensemble playing Broadway, big band, contemporary jazz, classical, and worship music in Speculator, NY. He performed with this ensemble for four years, including serving as the Director of Jazz Small Ensembles and Big Band for two years. He has taught masterclasses on improvisation in Mexico and at the Universidad del Turabo in Puerto Rico; and worked for Suman Entertainment as a tenor saxophonist and doubler on alto/clarinet/flute on cruise ships in the Mediterranean and Caribbean.

Roy has played on numerous recordings, both as sideman and bandleader. He recorded on Easy Company’s self-titled album in 2009, produced by five-time Grammy winner John Snyder and five-time Grammy-winning recording engineer David Farrell. In 2010, he recorded an album as a leader entitled Long Shot. In 2013 he played on Gustavo Cortinas’ album Snapshot and toured Mexico in support. He has been recognized in competitions and placed third in the Union League Civic Arts Foundation Jazz Improvisation Competition in 2013 (Chicago, IL).

He released his debut CD as a leader, Martha, in 2014 with a quartet formed of fellow Northwestern grads Gustavo Cortiñas, Kitt Lyles and Joaquin Garcia, all bandleaders and returned the favor by joining their ensembles: Snapshot (Cortiñas), Real Talk Collective (Lyles) and Rhythm Convergence (Garcia). The Roy McGrath Quartet was featured in the Jazz Institute of Chicago’s NextGEN concert series in 2015. Later that year, the Chicago Department of Cultural Affairs and Special Events (DCASE) awarded McGrath a grant to take the quartet on a month-long tour of Mexico. Also in 2015, The Roy McGrath Latin Jazz Quintet performed at the Chicago Latin Jazz Festival.

He also launched the Julia al Son de Jazz project in September 2015, commissioned by Chicago’s Segundo Ruiz Belvis Cultural Center, where he works as director of the youth Afro-Caribbean Jazz Ensemble and collaborates with folkloric ensembles. The project used the writings of revered Puerto Rican poet Julia de Burgos as a springboard for new compositions that included spoken word recitations of her poetry. Its debut was followed by successive performances throughout Chicago including three dates for the Chicago Park District’s Night Out in the Parks summer concert series in 2016. McGrath has since used ideas developed during that period in his latest endeavor, Remembranzas, a new batch of original compositions that incorporate folkloric bomba rhythms and other Puerto Rican elements in a jazz framework.

Roy has taught masterclasses on improvisation at Dulwich College International in Shanghai, Suzhou, and Beijing, at the Universidad del Turabo in Puerto Rico and at Las Musas de Papa Sibarita in Mexico City.