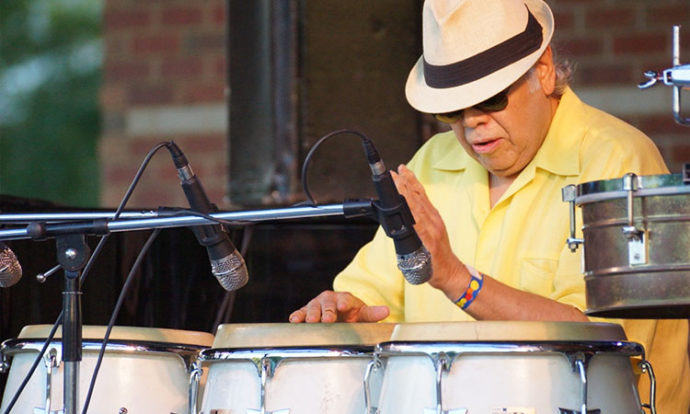 Ray Mantilla was born in 1934 in the rhythm-rich, dance-crazed atmosphere of the South Bronx where Afro-Cuban rhythmic forms transmogrified with jazz harmonies and sensibilities in the streets, the homes and dance halls. By 21, Mantilla was on the bandstand playing conga drums along with contemporaries Eddie Palmieri and Ray Barretto, playing that unique Neo-Nuyorican synthesis known as ‘salsa’.

With flutist Herbie Mann, Ray Mantilla entered the international spotlight in 1960. Then, Max Roach invited him to be part of the classic “Freedom Now Suite” recording. After a stint in Puerto Rico where he honed his skills on the trap set, Ray returned to the States to tour nationally and in Europe and Japan with Art Blakey and the Jazz Messengers. For the seven years Ray was with Blakey he occupied his off-hours doing studio work while recording and performing with almost every major figure in jazz including singers Eartha Kitt and Josephine Baker.

In 1977, Ray Mantilla became the first North American Latin musician to play in Cuba since the Cuban Revolution when he appeared there as an essential member of the historic goodwill ensemble led by Dizzy Gillespie.

Ray Mantilla’s career has included membership in many legendary Jazz and Latin Jazz ensembles. A short list of Mantilla’s credits includes Max Roach, Charles Mingus, Ray Barretto, Gato Barbieri, Sonny Stitt, Bobby Watson, Herbie Mann, Tito Puente, Cedar Walton, and Freddie Hubbard. Prolific in the studio, Mantilla can be heard on over 200 albums. Ray Mantilla appeared on the great recording, “Fifty Years of Mambo”, recorded live in Town Hall, New York, which received a Grammy nomination. He has appeared in all major clubs in New York City — the Apollo Theater, Palladium, Blue Note, SOB’s, Birdland, Fat Tuesday’s, Village Gate and the Village Vanguard besides many major international jazz festivals such as Sanremo, the Pori Jazz Festival, JVC Jazz Festival, Montreaux Jazz Festival and the Grande Parade du Jazz. He has been voted Percussionist of the Year by the Jazz Journalists Association and by major jazz periodicals from around the world – including Jazz Times (USA), Jazz Magazine (Italy), JazzThek (Germany) and others.

Ray Mantilla describes his music as “Latin Jazz with authentic Latino rhythms.” His goal, he says “is to keep playing good music, have people come to see us, and to preserve the tradition.” In 2003 Ray Mantilla signed with Savant Records and his first record for the label, “Man-Ti-Ya” was released (SCD 2059). His second recording, “Good Vibrations” (SCD 2073) climbed to the prestigious #1 one spot on jazz radio and remained there for over 3 weeks, overtaking artists such as Eddie Palmieri and Ray Barretto.