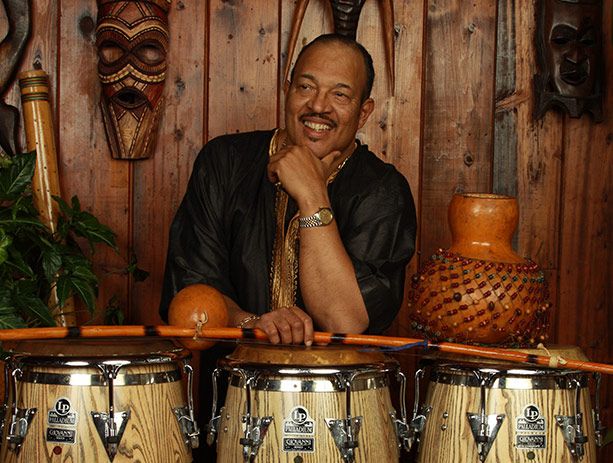 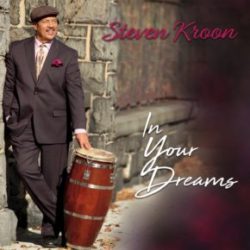 STEVEN KROONwas born in Spanish Harlem to parents who moved to New York City from Puerto Rico. His surname comes from his grandfather, who immigrated to La Isla de Encanto from the Dutch-speaking Caribbean island of Curaçao. At the age of nine, the family moved to Queens, where the youngster’s interest in music was sparked by the presence of many noted jazz and R&B musicians.

“In my neighborhood,” he recalls, “I had Eddie “Lockjaw” Davis as a neighbor and Lester Young four blocks away. We used to wait on the stoop until his taxi pulled up and Lester would get out with his hat in one hand and his sax in the other. We would be like, ‘Yeah, Prez! James Brown also lived in the area. But I came with all of my Latin roots, thanks to my father I heard the whole spectrum of music.”

He and his long-time friend and fellow percussionist, Wilson “Chembo” Corniel studied Afro-Cuban percussion with the late, great Tommy López, Sr., who showed Kroon how to play the proper tumbao and “sit” in the drum. Later, he studied Brazilian rhythms with Dom Um Romão. With such a wealth of knowledge, it’s not surprising Kroon quickly became a first-call percussionist for recording sessions that required a wide range of talents. Over the years, Diana Krall, Aretha Franklin, Roberta Flack, The Temptations, Bill Cosby, Kenny G, Ron Carter, Spyro Gyra, Bette Midler, Gary Bartz, and Paul Butterfield have tapped Kroon’s seemingly endless array of skills.

His two-decade-long professional association with R&B crooner Luther Vandross underscores Kroon’s reputation as one of the world’s most versatile and respected percussionists. “My time with Luther was great,” Kroon says today, “but when it came time to do my own thing, I always knew that it was going to be Latin jazz because that’s where my heart is.”

Steve’s music is loaded with the instantly-likable melodically attractive and rhythmically intriguing performances that once made Latin jazz the kind of music diverse audiences could groove to. “A lot of guys today play too much,” Kroon adds, explaining how he approaches the style reverently, with an emphasis on finesse. “It’s great to have that kind of knowledge, but when you make an album, you need to remember everyone — all kinds of listeners and dancers. If you are having people over for a barbeque, for instance, you should be able to put it on and leave it on. It fits what’s going on.”

The title of Steve’s most recent recording titled, In Your Dreams (Kroonatune Records) came to him in the middle of the night. “Creating this CD is like a painter painting with a blank canvas just waiting to color it with melodies and grooves,” says Steve.”

2020 Update: Steven Kroon is currently working on a compilation with bonus tracks. More information as it becomes available.