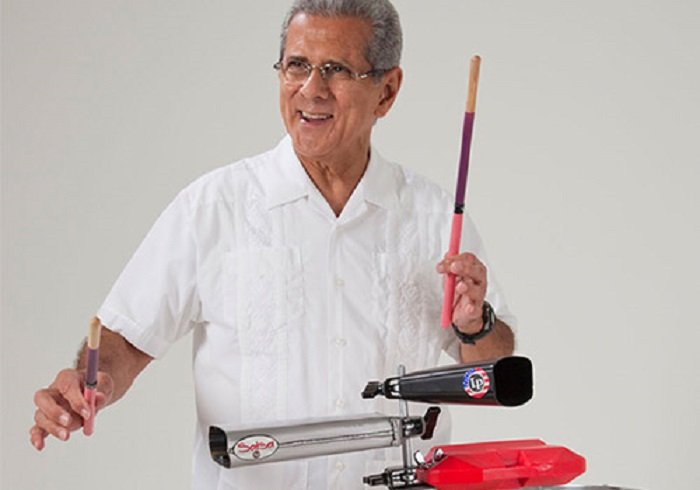 ORLANDO MARIN (born 1935, Bronx, New York) is an American bandleader and timbales player. He formed his first band, Eddie Palmieri and his Orchestra, in 1951–52 with himself as director and Eddie Palmieri as musical director and later as a pianist. He is of Puerto Rican descent.

After his first group broke up, Marin got a three-year contract at Sunnyside Garden. This was his first steady gig. Along with his music, he studied as a commercial artist/comic book illustrator. He played with several bands at the famous Palladium Ballroom.

Marin went into the army in 1958 and served in Korea. While on duty, he won first prize in the All Army Talent Competition in the Pacific Command. Afterward, he toured Korea and Japan and visited Washington DC for the final competition. This was followed by a performance on The Ed Sullivan Show. Also, when stationed in California, Orlando sat in for Tito Puente on timbales at the Hollywood Palladium.

Marin left the army in 1960 and formed a new band with many of the previous members. He returned to New York. He again appeared at the Palladium Ballroom and other New York dance venues, including the Limbo Lounge, the Bayside Manor, the Hotel Taft, and the Bronx’s Hunts Point Palace, among others.

Marin was a contemporary of such greats as Tito Puente, Machito, and Tito Rodriguez. He is the only orchestra leader from New York’s golden era of mambo who still performs regularly.

In 1954 he recorded first composition, My Mambo on 78 (rpm). His first two albums Arriba Cha-Cha-Cha, and Let’s Go Latin were recorded for Fiesta Records. He recorded Mi Mambo on the Plus label. He recorded Se Te Quemó La Casa and Que Chévere for Alegre Records. Marin then returned to Fiesta Records, for whom he recorded Está en Algo (English: He’s Up To Something) which included the hit “Aprende a Querer.” In 1970, he recorded Out of My Mind, for the Brunswick label. Then, he released his album Saxophobia.In 1961, Marin released his hit charanga record Se Te Quemó la Casa.