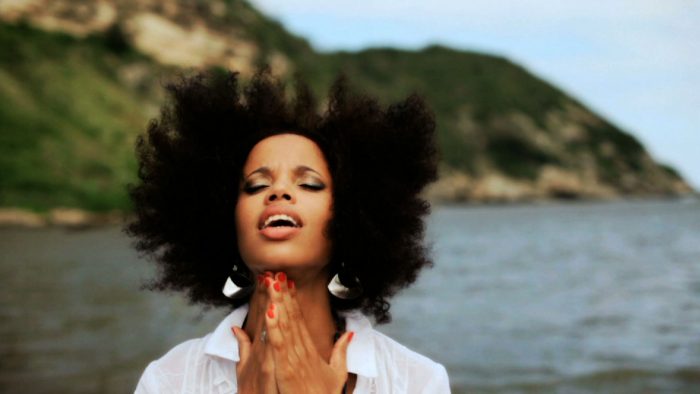 Singer, composer, pianist, Afro Cuban dancer, actress, and educator Melvis Santa was born and raised in the heart of an eclectic neighborhood in Havana, being exposed to multi-cultural traditions early on. Since age 4 she participated every weekend in the art programs offered by Gran Teatro de La Habana, Teatro Bellas Artes, and El Musical, three legendary theaters located in her hometown. At 7 she started playing classical piano. Years later she graduated from Piano and Music Theory from the prestigious Amadeo Roldan Conservatory.

Melvis made a splash on the Cuban musical scene at the age of 14 when she founded the collective vocal group Sexto Sentido, a project that jazz great Chucho Valdés deemed as “the best Cuban vocal quartet of the past 30 years” in 2007. The ensemble won the first prize of the Jo-Jazz (Cuban Youth Jazz competition) in 2001. In 2010 Melvis spread her wings and appeared as one of the lead vocalists of Interactivo, a seminal fusion band in Cuba.

Melvis debuted as a solo artist in 2012 with the recording of her album Santa Habana, which was nominated to The CUBADISCO Awards that same year. Her musical influences encompass a wide stylistic variety from Cuban music and jazz, citing as her inspiration Cuban songstresses such as Rita Montaner, Merceditas Valdés, Celeste Mendoza, Celia Cruz, Elena Burke, and Marta Valdés. Likewise, jazz legends such as Billy Holiday, Ella Fitzgerald, Sarah Vaughan, Anita Baker, Shirley Horn, and Diane Reeves to name a few. The New York Times defines her style as possessing 70`s soul underpinnings, yet belonging to the Afro Cuban musical traditions.

As an actress, Melvis has starred in the feature film 7 days in Havana, which garnered worldwide critical acclaim, directed by Julio Medem, Benicio del Toro, among others.
Based in New York since 2014, she continues to make a mark as a performer and educator teaching workshops at NYU, CUNY Graduate Center, The Spence School, Tulane University of New Orleans, as well as collaborating with different organizations such as Global Rhythms, teaching music, voice, and Afro diaspora dance for children and adults. Melvis is the creator of the Caribe Body Fitness (dance program) and the Afro Cuban Voice Therapy (music program).

Melvis is currently working on 2 different musical projects, Melvis Santa & Ashedi -exploring the connections between her Afro Cuban rooted musical traditions, bolero and jazz influences; and Ellas-Son, an all-female ensemble formed by multi-instrumentalist and talented musicians honoring Women in Cuban Popular Music. With both, she has performed at the historic Minton`s Playhouse jazz club, Birdland Jazz Club, the Zinc Bar, Subrosa, The Jazz Gallery, and The Bronx Museum. Also in Miami, New Orleans, and Chicago.