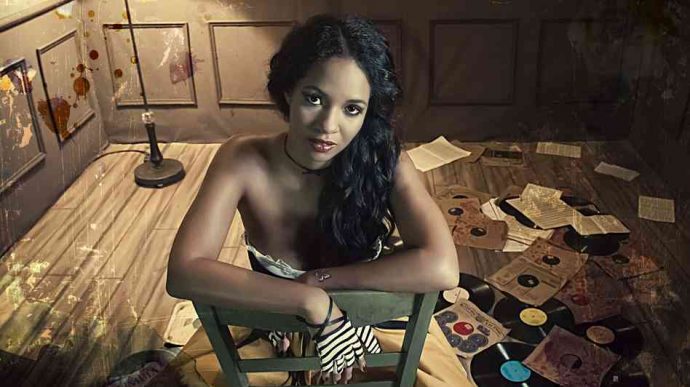 (Havana, Cuba) February 2019 – On March 22 Eme Alfonso will re-release her new album VOY with digital CD distribution in the U.S. Chosen by the Cuban critics as one of the best albums of 2018, Eme will bring her unique mix of Cuban island sounds with soulful genres to the U.S.

Hailing from a family of legendary musicians, Eme’s parents, Carlos Alfonso and Ele Valdés, founded the Latin GRAMMY-nominated band “Síntesis,” who pioneered the sound of mixing Afro-Cuban music with rock and jazz. Eme grew up in “Síntesis” and joined the band as a young woman on the keys and vocals. Her first collaboration was recorded when she was only 7 years old alongside Silvio Rodriguez for UNICEF.

In 2008, she stepped out into her own with her debut solo album Señales. Her warm and vibrant voice took center stage and was regarded as the premier Latin Soul songstress of the moment. The debut solo album earned her the Cubadisco for best fusion album in 2010 and her second album “Eme” won again in 2013. The striking blend of jazz, funk, soul and traditional Cuban rhythms has garnered her praise from NPR and the BBC who both hailed her as “A promise of Latin music.”

Now with her third album Voy due to be released in the U.S., Eme plunges deep into soul, funk, jazz, and Afro-Cuban sounds. The new album was recorded in both Cuba and Brazil and produced by the renowned Brazilian producer, Alê Siqueira. The title track “Voy” is a gorgeous song about willpower, the future, perseverance, and firm thinking. Eme reflects, “I needed a song that made me feel strong on stage. My father advised me once that even in the worst moments our internal strength is the only thing that keeps us afloat.” Another standout is “Libre” which was inspired by Alice Walker’s book The Color Purple. “Although it was written in another time, I felt that we still have the same problems in terms of women’s rights and gender violence,” Eme comments, “I think it’s important to have a song where I can express what I feel and think.”

“El Bote” is about facing your fears and dealing with things head-on, through the voice of a young boy who dreams about adventure and a life at sea but fears the water and its secrets. He finds encouragement and Eme sings “One day an old woman (Yemaya) told him: Everything uncertain is a way out when luck falls asleep. So the boy sailed and never returned.” “Oroko” features Eme’s parents, Carlos Alfonso and Ele Valdés, along with Cuban jazz pianist Harold López-Nussa and his brother Ruy Adrián López-Nussa on drums. Eme reflects, “This is a prayer dedicated to Oshún the goddess of femininity and fertility. I had the pleasure of recording it with Harold Lopez-Nussa a great pianist and friend. In the choirs “Síntesis” the emblematic band of my parents.”

Eme has graced stages worldwide and performed and collaborated alongside notable acts like Esperanza Spalding, Preservation Hall Jazz Band, Roberto Fonseca, Salif Keita, Omara Portuondo, among others. She was invited to be part of important projects to promote the cultural diversity of Cuba like “Para Mestizar” sponsored by UNESCO. In support of the new album, kicking off with a performance at SXSW on the NPR Radio Day Stage on March 13, and at the Parker Jazz Club on March 15. Her performances mesmerize fans and critics alike and her high energy performance promises to shake the stage and leave the audiences dancing and calling for more!